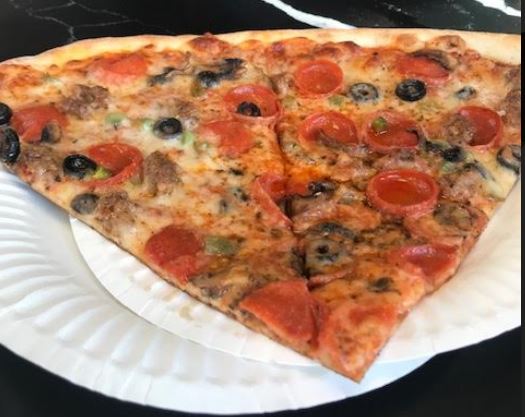 It’s not often when a restaurant owner asks me to review their establishment. In fact, it only happened two other times. Fortunately, each time the food was good; the service was good and it was fun to review. This restaurant is no different.

This is where the old Surfrider Pizza was. It used to be one of my favorite restaurants, but the problem was that I was always cold when I was there due to the open windows and doors. It’s no different now, except Steve and I were sitting on the south end of the building and the windows weren’t open. If I were to go back – and I’m pretty sure I will – I would try to sit in the same place.

It’s also worth mentioning that the interior seating is all on high stools and counters. Outdoor seating is with full sized chairs and table. For some people, high chairs may deter eating there.

Menus are all over the restaurant, but I felt like I was in an eye doctor’s office trying to read the eye chart. The print was very small. I asked if there was a take out menu but was told the menu was online. I decided to squint and do my best to read it. It should be noted that the sun shone inside the building, and made it a little more difficult to read the offerings.

There were many types of pizzas to choose from. I asked if all the pizzas were the same size and was told they sold by the slice, or 18 inch pizzas. Had a personal 10 inch special pizza, which was just cheese and pepperoni for $10 and I saw several people ordering that. There were at least 11 different kinds of pizza, and Steve and I decided to try two – A KONG, which was advertised as having mozzarella, mushrooms, green pepper, pepperoni, black olives and sausages.

We also ordered a KIKI, which had mozzarella, Canadian bacon, marinara sauce and pineapple. We had two slices of KONG and one slice of KIKI and they were both excellent! Tasty, hot, loaded with toppings and just a little spicy. The idea of ​​being able to buy by the slice was an added bonus as it allowed us to taste more than one pizza. And here’s the most surprising thing of all – each slice was only $6!

We also ordered half a Caesar salad and it was more expensive than the $8 pizza. It was very good too. Large crispy croutons; the dressing was good; the lettuce was fresh.

Here are some other interesting things about the restaurant.

They have 18 draft beers; in addition, they have canned beers and other beverages. There is a large container of water with ice that customers can pour themselves. They have hot wings and have a Tuesday night special with 30% off their hot wings. They offer sandwiches, and if you’re gluten-free, they have pizzas made with cauliflower flour so you can indulge in that too.

There are several disadvantages worth mentioning.

It’s definitely a neighborhood restaurant as parking is next to impossible. The place was packed but I suspect it was people living within walking distance because if I didn’t have a disabled sign I don’t think we would have found anything close enough to comfortably walk . (There was a disabled space right in front of the restaurant.)

There was a radio on loudly; and there were three televisions playing something different on each of them. I noticed that several people were gathering around the television which was showing a basketball game. We were near the “Simpsons” and no one was watching, including us. They also don’t accept cash – credit cards only.

However, the people at the counter were friendly; the young lady came up to us and asked if we needed anything else. Enzo, the man who took our order wished us a good night as we left.

Overall Steve and I were very pleased with our visit. The total bill came to $28.03 and we left a 20% tip. The food was delicious and we will be back.