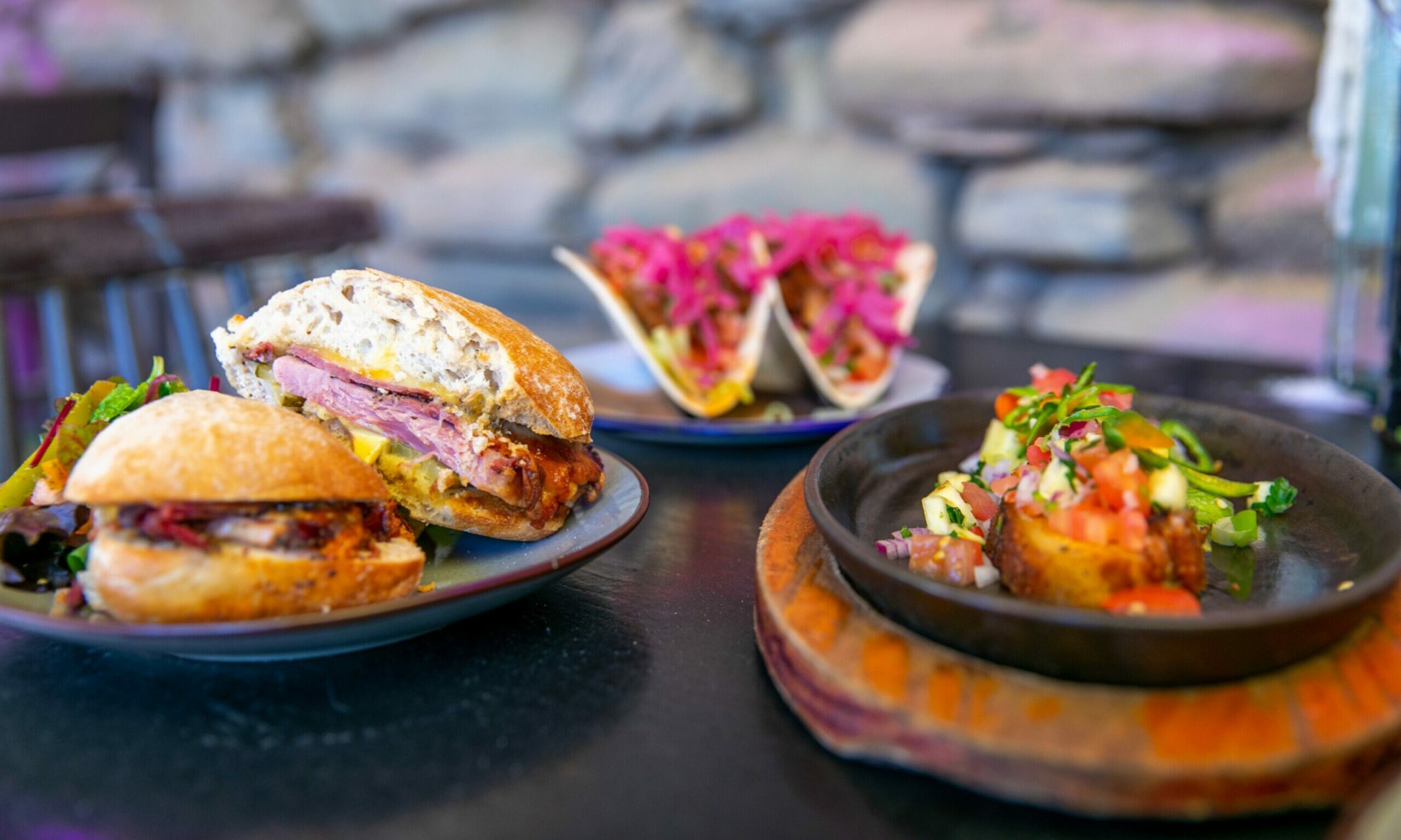 Hidden in plain sight you’ll find some of the best Mexican and South American food in Perth.

You can easily walk past Gringo’s Two Chihuahua bar and restaurant on Scott Street without noticing. Until you start smelling the food and hearing the faint sound of Latin American hip hop.

But it was Google Maps that led me to the restaurant on that sunny Saturday afternoon where I found myself in Perth.

The first thing you’ll see upon entering the long driveway leading to the restaurant is bold and bright outdoor furniture.

You will then pass a Tiki bar on the right where the space opens onto a courtyard with a terrace.

The building itself surrounds this space and with plenty of indoor and outdoor seating it is clearly possible that it will get busy.

There were a few tables of couples, families and friends sitting outside enjoying the weather so my boyfriend and I decided to join them and grab a table for two in the sun. Decor is funky with pops of color throughout, and there’s a foosball table to keep all ages entertained at the entrance.

Our friendly waiter greeted us and handed us a laminated A3 menu each. There is a dietary and allergy key at the bottom which would make it very easy for those with dietary requirements, and food and drink are all present.

I was tempted by the frozen margaritas (£9) but opted for a Diet Irn-Bru. My other half was driving so it was a Diet Coke (£2.95 each) for him.

We were recommended to try three dishes per person so we ordered a mix of five things with the option to order more if needed.

Cutlery, a cup of water, and a camping plate that had seen better days were placed in front of us. We could kind of see into the kitchen from where we were sitting and had a good view of the whole restaurant after diving into the middle.

About 20 minutes in a sea of ​​dishes descending on our table in no particular order. I ordered a margarita to wash down the food at this point which turned out very frozen and very alcoholic. It was a traditional lime, which was very refreshing and had a salt rim with a slice of lime as a garnish.

The tacos were first. Made with a small soft tortilla, each flavor came in a pair and they all had iceberg lettuce, sour cream, house salsa and pickled red onions.

The chipotle beef, sweet pickled carrot and pico de gallo was by far my favorite of the two. It was super juicy and I was surprised how well the tortilla held everything together. The beef had been marinated in spices and although it looked simple it was packed with incredible flavor.

Chunks of smashed avocado sat on top of the chili lime chickens. The meat had been finely shredded and although soft it lacked flavor. I found the vegetables and sauces for this one did most of the work.

Next was the Cuban supreme. This ciabatta sandwich filled with pastrami was heavenly. 100% meat makes up this dish with its peppery crumb. The slight saltiness really helped bring the flavor of the mozzarella into action which added a bit of spice to the sandwich. A sweet thick slice of roasted gammon was also in the mix, and with the mustard mayonnaise it really complemented it brilliantly.

The elotes however surprised me as I didn’t expect them to be as good as they were. Chunks of corn on the cob rolled in a spicy cheese sauce then rolled in spicy breadcrumbs were served with a wooden skewer.

Biting into the corn, the crumb was crispy and you could tell the cheese had played a huge part in the flavor. The cheesy and spicier crumb elevated it and it was definitely another one of our favorites. The simplicity made me think it was something I could recreate at home.

There is also a corn on the cob in tequila butter (£5.50) which I would like to try next time.

Finally, the crispy pork belly served with pineapple salsa and pico de gallo (£9). Served on a hot plate, I didn’t hear it coming as it didn’t sizzle.

The pork was crispy on the outside and had crackling around the edges. In the middle, it was juicy and succulent. It had been cut into two long thin pieces of meat. The pineapple salsa and pico de gallo got a little spicy from the fresh red and green chiles that lined up with a runny nose, but the sweet fruit cooled deliciously.

I was glad we didn’t order a sixth item at the end as we were very full. Other dishes that had piqued our interest included the sweet potato enchilada, Mexican street fries, saltfish pups, calamari, and Mexican marinated chicken wings.

As tempting as the churros and the temblque – a South American coconut dessert served with fresh mint and pineapple – were, we couldn’t stomach another bite.

Around this time, more and more customers were arriving and the Latin American hip hop music had kicked up a notch, really bringing the place to life.

Two Chihuahua’s Gringo’s Bar and Restaurant has a real street food vibe which you know late night would be the place to go in Perth for a different party vibe.

The food was fresh and everything was incredibly vibrant which made eating even more enjoyable.

Although the decor might look like it could use a bit of TLC, that’s really the vibe of what I got.

There aren’t many restaurants in Perth that will place used camping plates in front of you to eat, but with food like the offerings here I would line up with it again and again.