The Third Corner at Ocean Beach 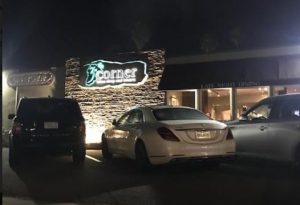 The Third Corner at Ocean Beach

At Christmas time, some friends gave me a gift certificate for The third corner. I had been there several times before; usually for lunch or their weekend brunch, but never for dinner. Steve and I decided to give it a try because we were in the mood to party.

That mood almost evaporated within the first 10 minutes of walking through the door. I had made reservations, and when we were shown our table, it was along the wall with the windows facing West Point Loma Avenue; there was a large group just to our left and two women seated to our right. The big party was so loud that I asked Steve to see if we could switch tables. After all, it was only 6 p.m.; there were plenty of empty tables and that didn’t seem like a problem. Well, apparently we were, as the hostess said she could seat us outside, otherwise we had to keep the table we were shown.

Steve decided it would be too cold to eat outside, so he said we’d keep our table. Also, I needed a “side” chair, as I sat on the soft cushion facing the restaurant interior and my head barely reached the top of the table. Luckily Steve switched places with me and the chair was at the perfect height. I still didn’t like the party next to us too much.

The two ladies on the other side of us smiled and said hello. It seemed like we were in for the long haul. (More on them later!)

The menu is quite eclectic – starting with eleven Starters, a soup of the day and a Vegetarian Soup with Wild Mushrooms; six Salads plus a lunch special of soup and salad and 4 side dishes to salads; 4 sandwiches and 15 appetizers. Many items on the menu were labeled “GF”, meaning gluten-free.

As The Third Corner sells wines – lots of wines – the wine list is huge. There is something for everyone. Plus, there’s hard liquor, beer, and red or white sangria. Steve and I both love sangria, but we had never had a white one, so we ordered a carafe ($16).

We decided we should also start with an appetizer and ordered their fries – $6.95. We were unprepared for the size of the order, which was served with ketchup and Aoili sauce. The fries were all crispy and hot; and even when we got to the last ones they were still hot. And hallelujah! The big party was on! We made it through the appetizer without a blinding headache!

Steve ordered the Shrimp Arrabbiata ($21.95). It was cooked with bacon, tomato, garlic, capers, white wine, chili flakes, parmesan and served on a bed of linguine. That was delicious. It was a bit spicy, probably from the chili flakes, but it was amazing. There was nothing left on Steve’s plate when he was done!

I ordered the Day Boat scallops ($32.95), which were prepared with tomatoes, olives, capers, green beans, roasted potatoes and cooked in a lemon and white wine sauce. The scallops were large; cooked to perfection and absolutely delicious. Like Steve, I didn’t leave anything on my plate either!

Around this time, we started talking to Jill and Sandy, the two women who were sitting next to us. We discussed our meals, what we had and what we had eaten there in the past. I asked them if they were locals, and they said they were from La Jolla but came to Third Corner frequently. I don’t know how our old professions came about, but Jill mentioned that she was a retired teacher. Well, me too. I asked her where she taught and she said Poway. Hmmm. I was an administrator at Poway. Turns out she was most likely part of the group of teachers I trained to meet the needs of individual students in the Poway School District.

She taught her students at Painted Rock – a school I was assigned to in first grade to work with all the new teachers; she went from there to Westwood Elementary, the next school I was assigned to, and so on. We know a lot of people in common and she is still in contact with some of them to this day. So we made the “J” connection – Jill and Judi and laughed at the coincidence. Then I asked Sandy if she was also a teacher. She was – in Escondido, then quit teaching to go to SDSU to get a degree in social work. It’s funny – I also taught at SDSU. Then we did the “S” connection – Sandy and Steve – and our server name was Stephen. We were all sure that there must be some form of Karma involved in our meal, and that’s why the hostess wouldn’t change our seats!

Eventually Steve and I decided to try a dessert and share it. My favorite dessert is creme brulee, and they had it on the menu – $10. That was delicious; strawberries and ripe blueberries on top made it a perfect ending to our meal. The sugar had crystallized to perfection. It was a tasty ending.

Overall our bill, not including tip, was close to $100. A little steep for Ocean Beach, I thought, but in line with what other restaurants charge today. Stephen our server was charming, happy and knowledgeable so except for the fuss at the start it was a delightful time. As Jill pointed out – The Third Corner is for people meeting people. If you wanted a romantic evening, this seating arrangement wouldn’t work. But the food was A+ grade; the service too. We will be back!