The Drouthy Laird in Inverurie 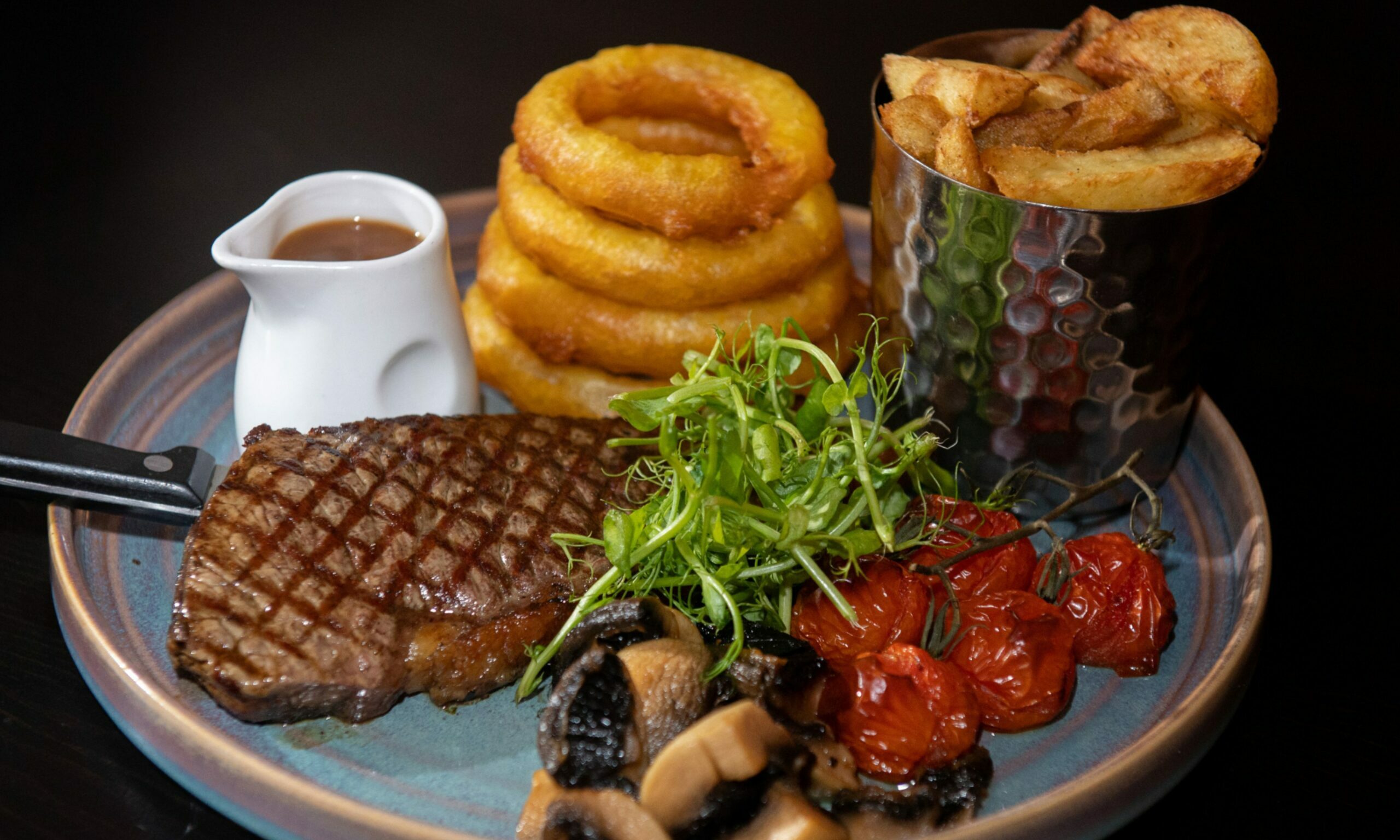 The Drouthy Laird in Inverurie

When I first walked into The Drouthy Laird I feared I had made a huge mistake.

It was Friday night and the bar was packed with happy revelers, a treat to see in this post-pandemic era.

But it definitely wasn’t the cozy meal I promised my friend, Kristin, and I was starting to panic.

Especially after reading all about the delicious menu, as this family business which is on Blackhall Road in Inverurie, had featured in Society earlier this year.

Luckily a nice member of staff noticed my confused expression and pointed me in the right direction to the restaurant.

To my embarrassment, it was very clearly marked.

I let out a little squeal when I walked through the door, as it was unlike any restaurant I had ever seen before.

Not only was it massive, but the ceiling and walls were adorned with rows of string lights.

There were plenty of couples clearly out for a romantic meal, alongside larger groups, and the staff seemed to work the room easily.

Kristin arrived and our waitress for the evening was extremely cheerful returning three times in total before we had stopped talking and were ready to order.

In fairness, there was also a lot of debate regarding starters as the menu was top notch.

A seafood lover, I was strongly tempted by the prawn skewers, marinated in chilli and garlic.

I ended up opting for cheese and tarragon stuffed mushrooms with a drizzle of balsamic vinegar, while Kristin opted for a duo of bruschetta.

Our food arrived quickly and oh my god my love affair with mushrooms began.

The portobello mushrooms were stuffed with mozzarella and cheddar, which were gooey and slightly crunchy on the surface.

The flavors, along with the balsamic, were complete heaven, and the fresh side salad added a bit of crunch.

It didn’t leave me too full either, but it was enough to have my taste buds on alert and waiting for more.

Kristin’s bruschetta consisted of one crispbread topped with cherry tomatoes, basil and red onion and another with wild garlic, mushrooms and a balsamic glaze.

The bread was delicious and a nice change from the usual baguette, it was crispy on the outside and still slightly soft on the inside but not soggy at all.

The tomatoes were very flavorful and there was just enough basil to complement rather than overpower.

She also thought the mushroom filling was nice and garlicky without being too much and it was really good (and tasty) to see a mixture of different mushrooms rather than just white mushrooms – it gave the dish a different element.

Our plates were cleared quickly and it was on to the main course, which was definitely a steak affair.

Unusual for me, I opted for a locally sourced Aberdeenshire 8oz sirloin steak, while Kristin settled on a Guinness steak and pie, which was described as the dude’s own recipe. chief.

There really was a bit of everything from haddock from Peterhead to a delicious winter salad with black pudding from Stornoway.

I have never seen such a variety, with beautiful local details.

My steak, which I had requested to be medium to well done, arrived at the table, along with fries, mushrooms, tomatoes and onion rings.

It was love at first bite and was cooked exactly to my liking. It was also a generous size and was clearly a great cut from a local butcher.

It wasn’t too hard and melted in your mouth, and the fries were perfectly fluffy.

We also ordered halloumi fries, to which Kristin’s response was, “Oh. My. Goodness.”

The reason for her joy, this side dish was “heavenly” and is now Kristin’s new favorite way to eat halloumi.

She was also delighted with her steak pie, which was served with a puff pastry top, seasonal vegetables and fries.

The steak in the pie was hearty and cooked to perfection, tender and melt-in-your-mouth.

Kristin however felt that the Guinness/ale wasn’t that detectable in the sauce, and the fries, while chewy on the inside, could have been much crispier on the outside.

The vegetables were cooked perfectly al dente and they were a nice compliment and contrasted with the soft pie filling.

Having already declared her love for halloumi fries, Kristin also passed out after trying my onion rings.

Who knew onion rings could inspire such passion?

I agree with his sentiments, however.

They were real onion rings coated in a light crispy batter and cooked so that the onions were tender but not too soft.

Do we have room for dessert? Technically not, but that wasn’t going to stop us.

I loved that there was Mackie’s ice cream and sorbet on the menu, alongside classics like sticky caramel pudding.

Always a sucker for a brownie, I opted for a triple chocolate brownie served with hot chocolate sauce.

Kristin chose Eton mess after deliberating over the cheese board.

She said it was just the mix of crunchy meringue, soft whipped cream and mixed berries.

She really enjoyed the berry mix instead of the usual strawberries alone, although the honey taste was a bit lost.

As for my brownie?

Just the good side of sickly and utterly indulgent hot chocolate sauce finished me off.

Gooey, rich and yes this is part of my death row meal.

All in all we had a wonderful evening and really noticed how hard the staff worked.

This was particularly impressive considering how busy the restaurant was, no doubt because everyone discovered the varied and locally sourced menu.

We will definitely be back, not least because we felt we really got what we paid for.

[The Drouthy Laird in Inverurie]