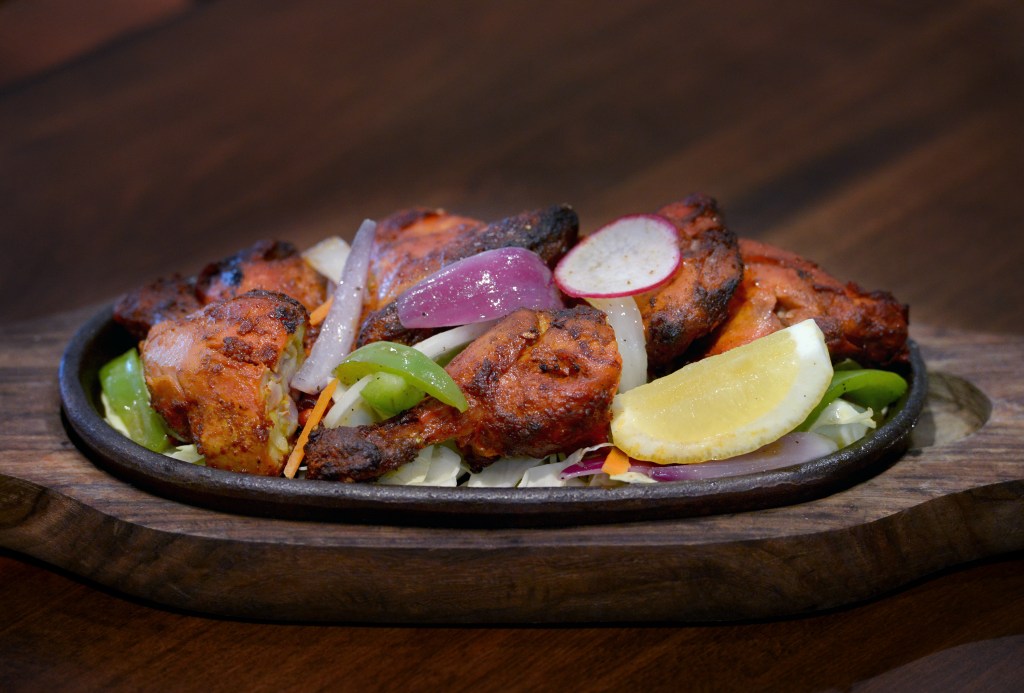 At the north end of the Montecito Plaza Mall is a lovely atrium with a few small tables and benches for socializing and people watching. Around the rim are a few shops and restaurants. I always wished the place was built facing the creek with a fabulous view of Mount Tamalpais. Hopefully at some point there will be a refurbishment to take advantage of these much more appealing views rather than the plaza and third street parking lot. But, in the meantime, we celebrated the atrium and Masala Kitchen.

Masala Kitchen sits at the edge of the atrium and offers indoor and outdoor seating. The evening was starting to cool off so we opted to dine indoors in the spacious, attractive and quiet dining room.

Crispy vegetable pakoras ($7.99) and vegetable samosas ($6.99) were served with mint chutney and tamarind chutney. The mint chutney tasted freshly made and vibrant, with good texture. The same goes for tamarind chutney. So often in other Indian restaurants, these chutneys are thin and without much flavor – an afterthought. They were respected in Masala and enhanced Pakoras and Samosas.

Pakoras, similar to vegetable fritters, were made with gram (chickpea) flour and grated vegetables. They were crispy, not mushy at all, and quite delicious dipped in the chutneys. The vegetable samosas, flour-based pastries with a fluffy filling of potatoes, onions, peas and corn tossed with pan-fried then ground spices, were lighter than the samosas I’ve tasted elsewhere. . They were definitely a step up from the traditional street food variety.

Our lovely server was attentive and slowed us down at one point. We were ordering too much and too quickly not only for us but for the kitchen.

Vegetarian and meat dishes are available and can be ordered at any heat level; we opted for the medium. It warms the mouth but does not intoxicate the taste buds. We wanted to savor every bite. If you like spicier foods, start with one item to test the heat level and work up to your taste.

A brass-handled Korma Golden Chicken Pot ($15.99) brought with it the intensely fragrant spices that are so intoxicating. It was creamy, spicy and nutty – no wonder it’s such a popular dish.

Garlic Naan ($3.99), the Indian flatbread, was baked by banging the dough on the side of the tandoori oven. When sufficiently baked, the bread was removed from the oven and cut into wedges. It was perfect for dipping in the korma sauce. The naan was thin with crispy edges, not thick and awkward. The menu had several variations of naan ($2.99 ​​to $5.99). including Kashmiri Naan, a buttery naan stuffed with dates and coconut ($5.99).

Vegetarian Baigan Bharta ($13.99), mashed eggplant cooked in the tandoori with a tomato-based sauce, also gladly indulged in naan. Carrot raita, a yogurt sauce that can be ordered as a side dish ($3.49) and which also accompanies Biryani dishes ($15.99 to $18.99), goes well with the eggplant dish.

And now, the masterpiece: Lamb Biryani ($18.99). Pieces of boneless, trimmed and seasoned lamb, homemade gravy, fried onions, spices like black cardamom that are sure to make a dinner party swoon, and basmati rice were layered in a pan, sealed and cooked until well infused, tender but not soggy.

I have often mentioned spices, but I don’t want to infer that everything tastes the same. No way. Masala, the name of the restaurant, means a mixture of various spices. There were so many different spice combinations giving subtle flavors to each dish.

The restaurant menu had many other dishes for which I will have to return. For example, the mixed pickles ($3.49) and tandoori items ($16.99 to $28.99) look particularly intriguing.

Rasmalai was described on Masala Kitchen’s menu as “a rich, crustless cheesecake in a milk sauce”. It was lighter than cheesecake, more like semi-soft pistachio custard in a rich milk sauce. It was served cold and so refreshing, a nice contrast to the exotic spices of dinner.

Gulab Jamun looks like tiny holes of richly browned deep-fried donuts in a sweet, rosewater-flavored syrup. They are known as the national dish of India. Originally, the small balls were made from milk reduced to a soft paste. Now more often powdered milk is used to get the right consistency. They were served hot.

Both tasted like something invented in a more decadent and lavish time.

It was dark when we left Masala Kitchen. There were about half a dozen teenagers seated at one of the tables in the atrium. They were just sitting quietly, talking and enjoying the night and a place where they could gather. It was nice to see people enjoying this space.

Ann Walker is a freelance food writer. Send him suggestions, comments and questions at [email protected]

Selection of alcohol: wine and beer