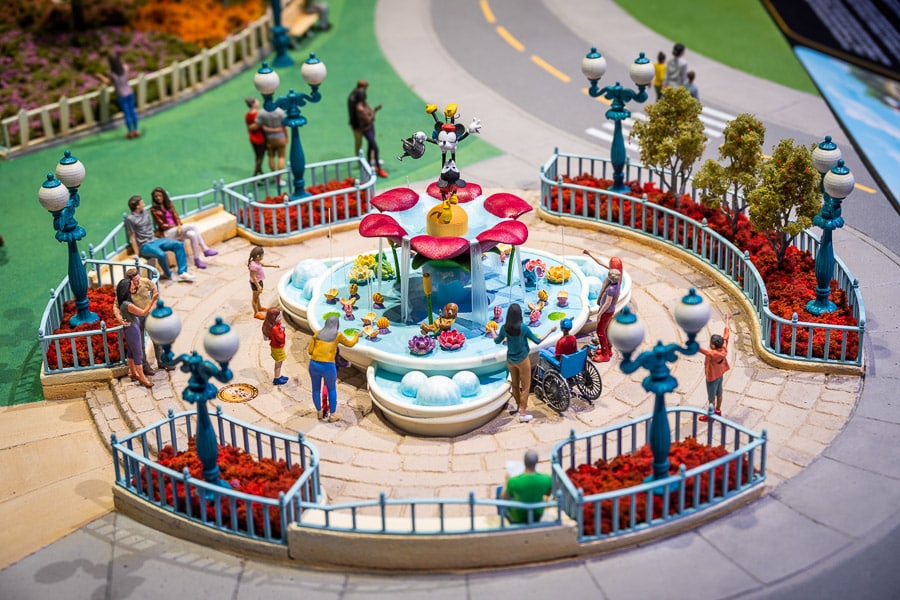 Disney has unveiled a model of the ambitious reimagining of Mickey’s Toontown at Disneyland which will debut in early 2023, alongside the new Mickey & Minnie’s Runaway Railway ride. This post shares photos and brief details about the changes.

For those unfamiliar with this project, Mickey’s Toontown closed several months ago to begin reinventing the entire land. Prior to this, the Mickey & Minnie Runaway Railroad was under construction and the demolition of other areas of the grounds were visible to guests’ view.

The expanded land will reopen in early 2023, alongside the new attraction, Mickey & Minnie’s Runaway Railway. When Toontown reopens in 2023, it will still be home to favorite attractions like Roger Rabbit’s Car Toon Spin, Mickey’s House and Minnie’s House. Other attractions will be reimagined in new ways, including Gadget’s Go Coaster, Goofy’s House and Donald’s Boat.

One of those additions includes Goofy’s How-to-Play Yard, which recently released concept art: 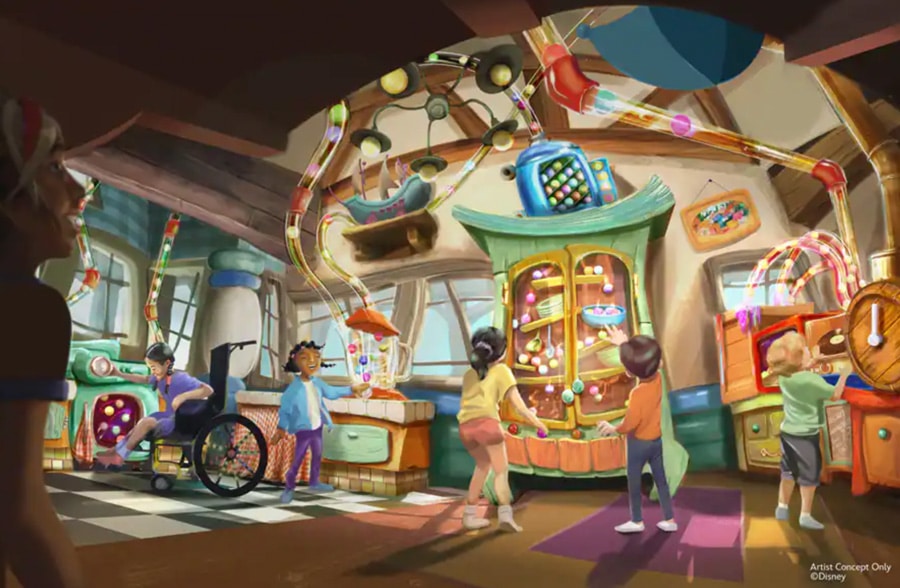 The complete Toontown has closed so Imagineers can create all-new experiences for families that build on Mickey’s Toontown legacy. The beloved land will transform into a vibrant symphony of sights, sounds and sensations. Focusing on families with young children, Mickey’s Toontown will feature new play experiences, as well as open, grassy play spaces. The land will be laid out for play and parental relaxation.

With a greener and more spacious Mickey’s Toontown, the land will offer more fun activities and attractions than it currently does. From active play to tactile play, new experiences will have kids sliding, spinning, splashing, touching and listening. 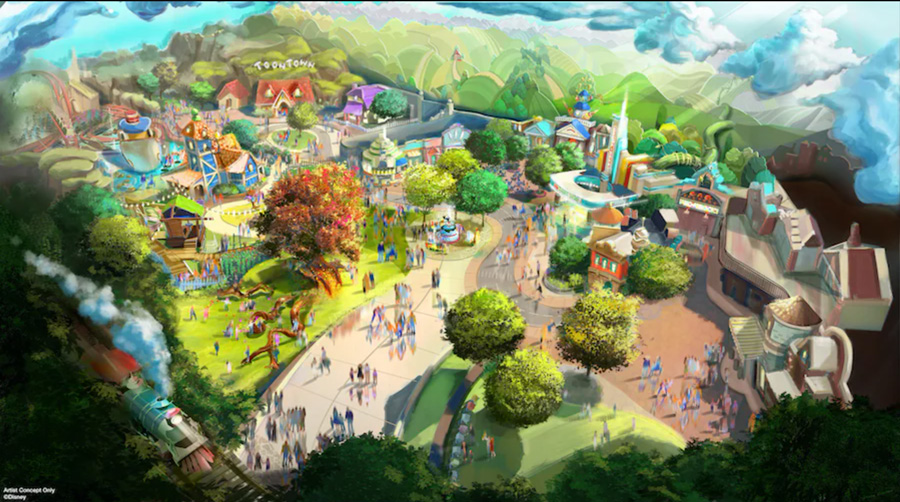 One of the new areas coming to Mickey’s Toontown will be CenTOONial Park, the first space guests will see when they enter. This natural space will be anchored by two interactive play areas.

At the center of CenTOONial Park will be a fountain, which will also become a central icon for Mickey’s Toontown. At its base, water tables will invite guests to play with water and live a sensory experience. At night, the fountain will come to life in a unique spectacle. 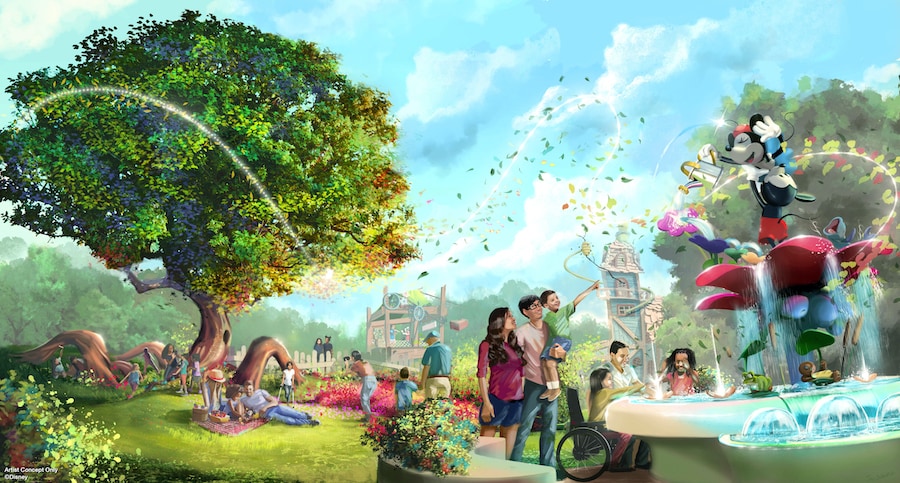 A Dream Tree Nearby will be inspired by the tree under which a young Walt Disney would daydream in his hometown. (It sounds like overkill, but whatever.) The sculpted tree roots will give kids a chance to play, crawl, and explore, and the rolling topography will provide rolling hills and a place to sit and dream.

When it reopens, Mickey’s Toontown will still be home to many beloved characters including Mickey Mouse, Minnie Mouse, Goofy, Donald Duck, and more.

With those background details aside, let’s take a look at the photos of the new Mickey’s Toontown model on the show floor at Expo D23 2022: 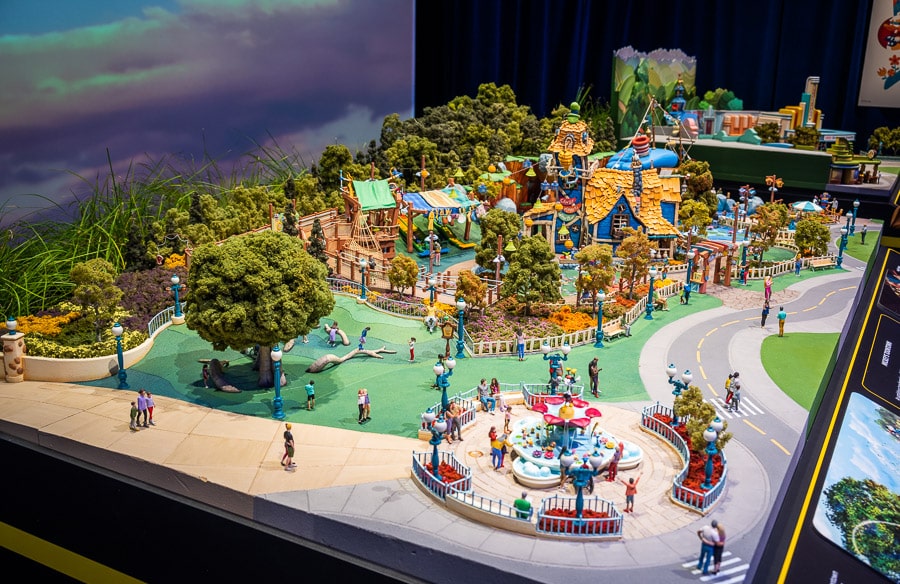 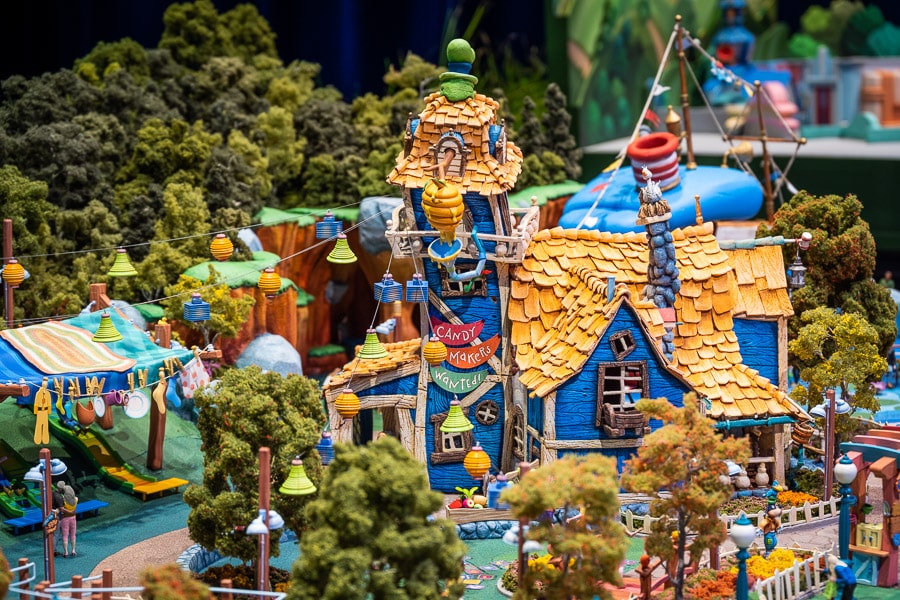 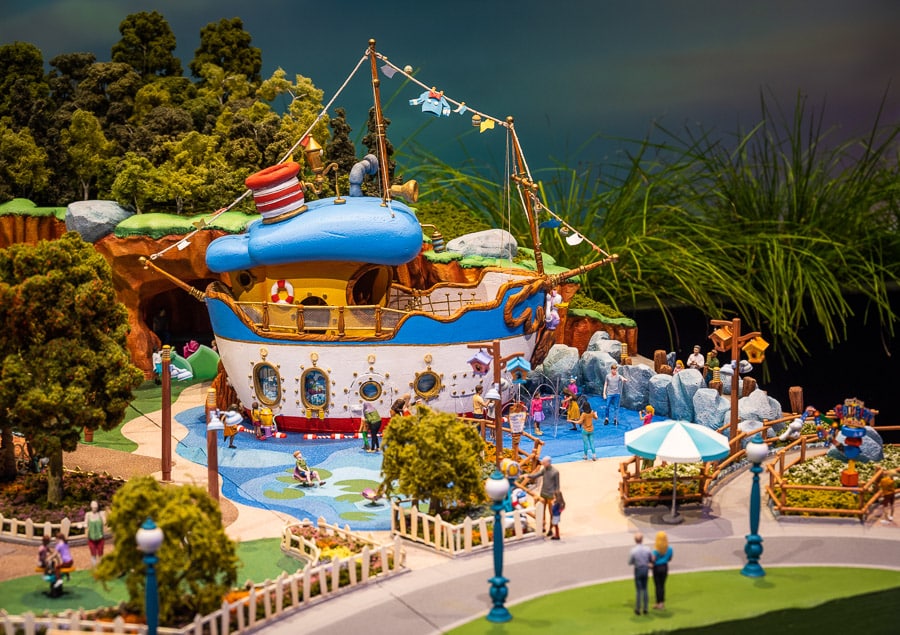 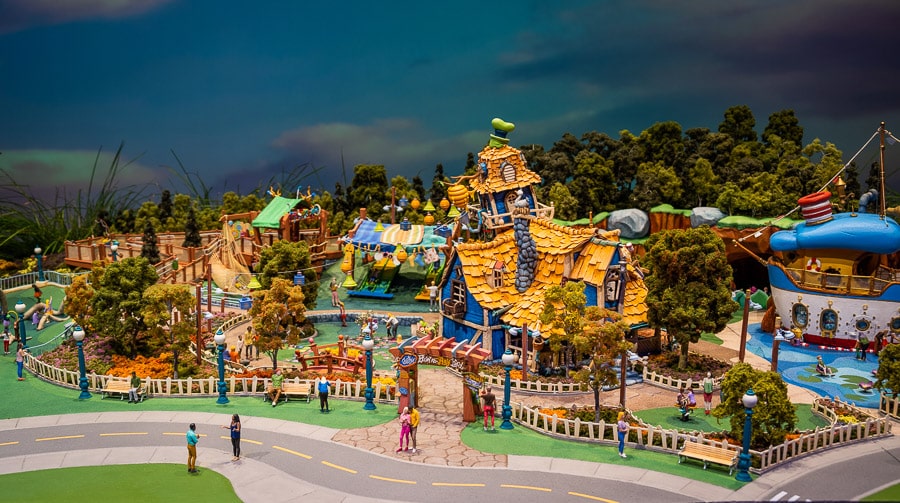 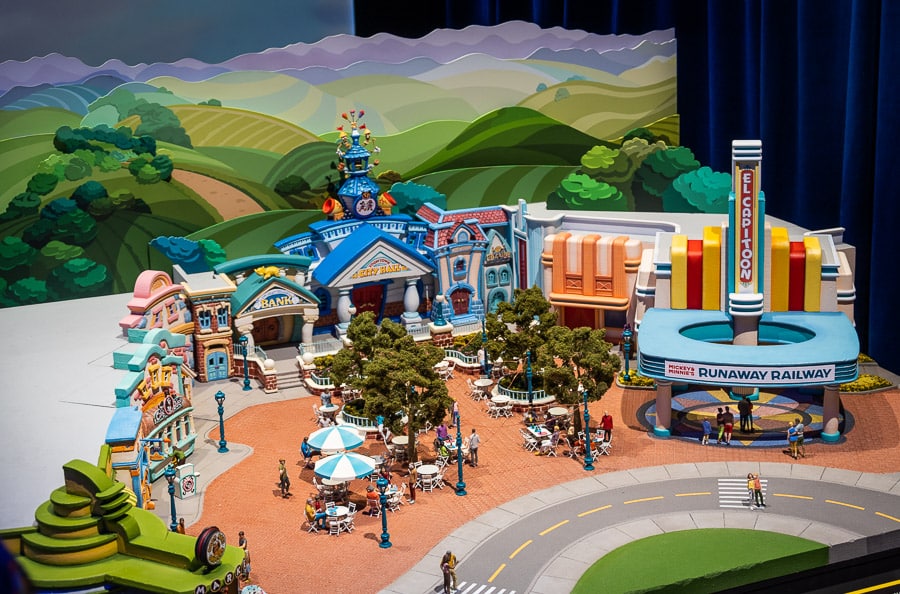 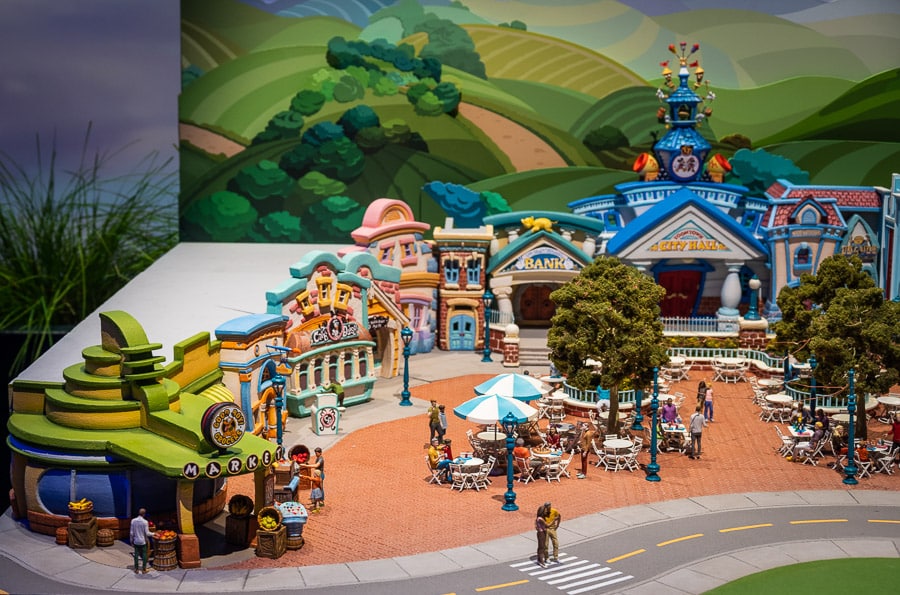 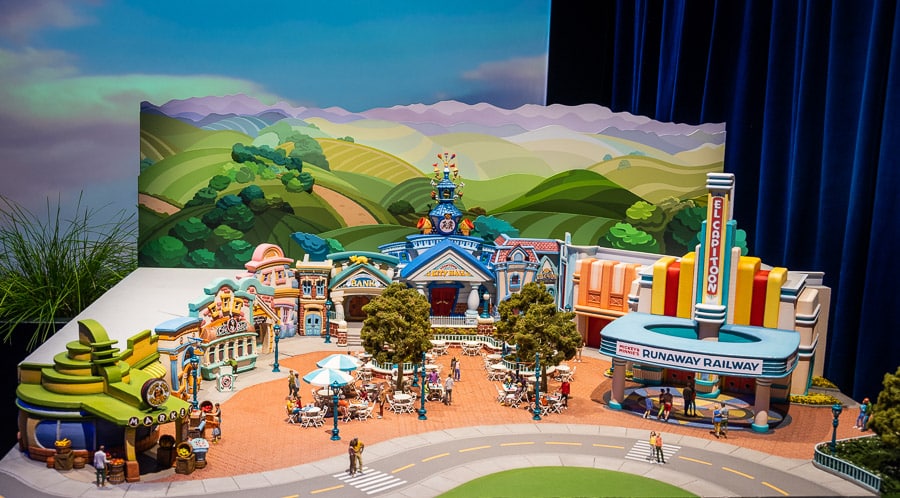 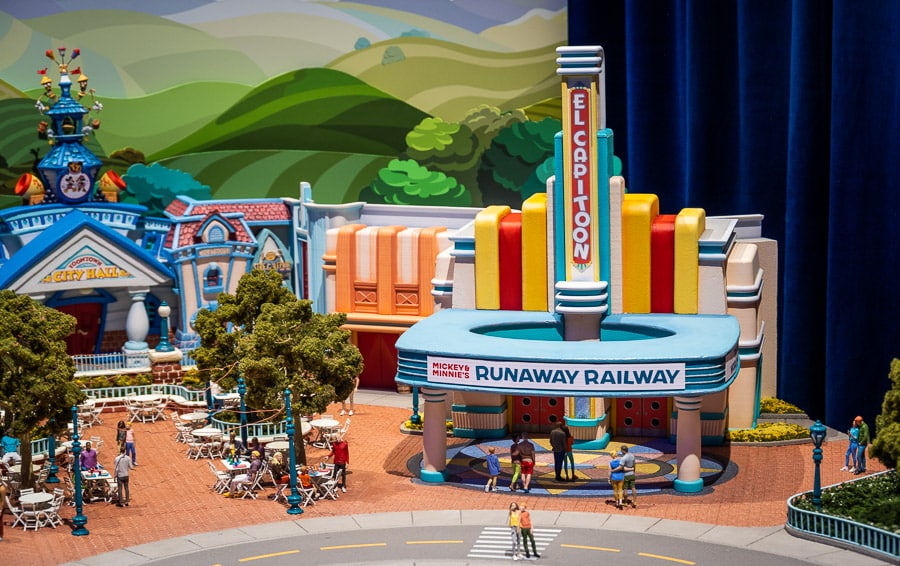 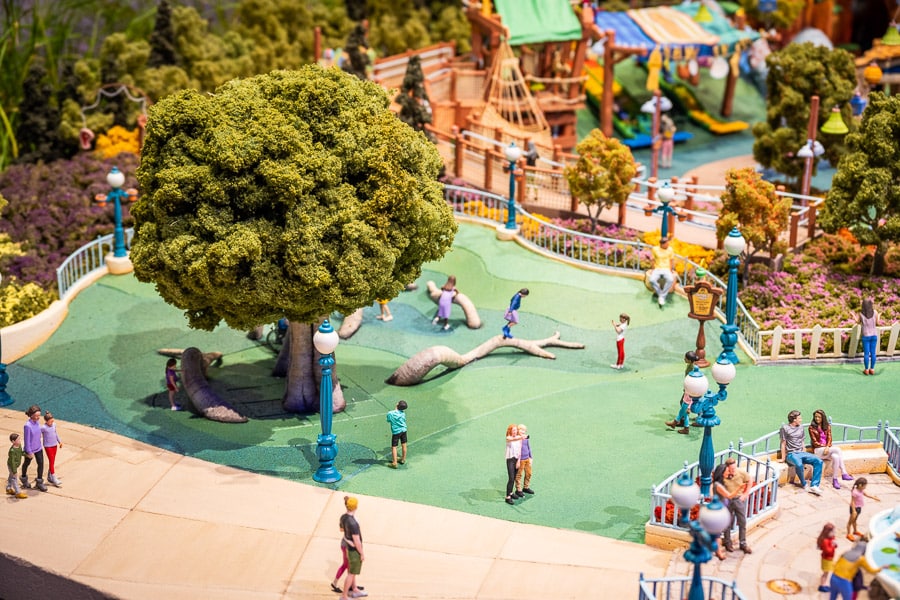 As with Mickey & Minnie’s Runaway Railway in Toontown at Disneyland, we’re mostly OK with these changes. From my perspective, the only downside is that the old Mickey Mouse and Roger Rabbit music fountains are being phased out, replaced by a single centralized play fountain.

Other than that, it should breathe new life into a country that’s reasonably popular for meet-and-greets, but has somehow faded in terms of energy levels. While Disney claims it will offer more “activities and attractions than ever before”, that’s not entirely true, as Toontown had quite a bit more which was cut for safety reasons over the years. decades. That said, these plans will certainly offer more interactivity than what could be found in the previous incarnation of Mickey’s Toontown.. 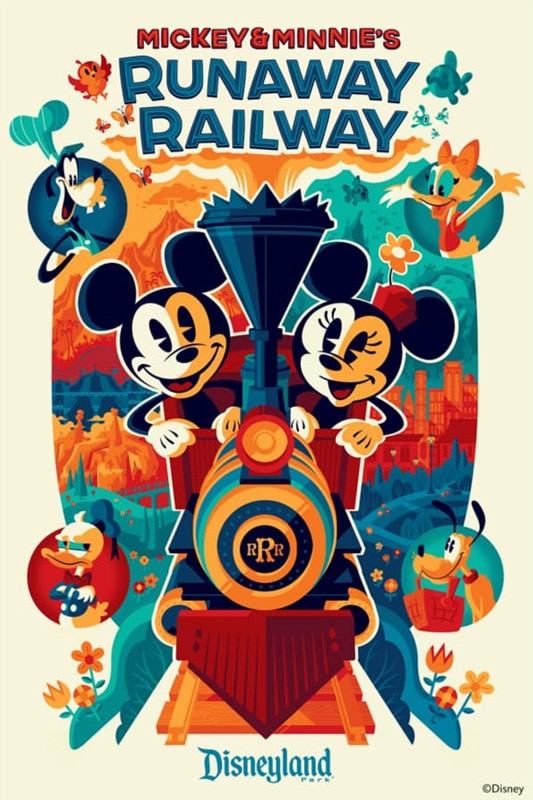 I can’t really speak directly to active and tactile play experiences, but one of the conversations we’ve had with friends who have young children is that play experiences for this age demographic are limited at parks.

I am very much in favor of children having opportunities for physical activity, discovery and interactive experiences. There’s definitely a shortage of spaces for kids to burn off energy and explore, and I’m optimistic that this reimagined Mickey’s Toontown will help add a much-needed option for that.

Ultimately, all of these interactive play spaces plus Mickey and Minnie’s Runaway Railway will be solid additions with nothing significant lost. Another big Toontown attraction should also put an end once and for all to rumors that the land will be replaced by a future expansion.

Plus, we incredibly think Roger Rabbit’s Car Toon Spin is criminally underrated, and anything that exposes more guests to Toontown and potentially this iconic attraction is good news from our perspective. In addition, more green spaces in the parks is always a good thing. We are cautiously optimistic that all of these changes and additions will be a net positive for Disneyland and its guests!

Planning a Southern California vacation? For park admission deals, read Tips to Save Money on Disneyland Tickets. Learn more about onsite and offsite hotels in our Anaheim hotel reviews and ratings. To find out where to eat, check out our Disneyland restaurant reviews. For unique ideas of things that will enhance your trip, check out What to Pack for Disney. For full advice see our Disneyland Vacation Planning Guide. Finally, for the guides beyond disneycheck out our Trails in Southern California for day trips to Los Angeles, Laguna Beach and tons of other places!

Something about the reimagined Mickey’s Toontown models at Disneyland catches your eye? Notice any obvious omissions or additions beyond what Disney has officially announced? What do you think of the reinvented Mickey’s Toontown? Can’t wait for Disney to breathe new life into this area, or do you think it’s already awesome? Any thoughts on adding Mickey & Minnie’s Runaway Railway to Disneyland? Do you agree or disagree with our assessment? Questions? Hearing your feedback – even when you disagree with us – is both interesting for us and helpful for other readers, so share your thoughts below in the comments!