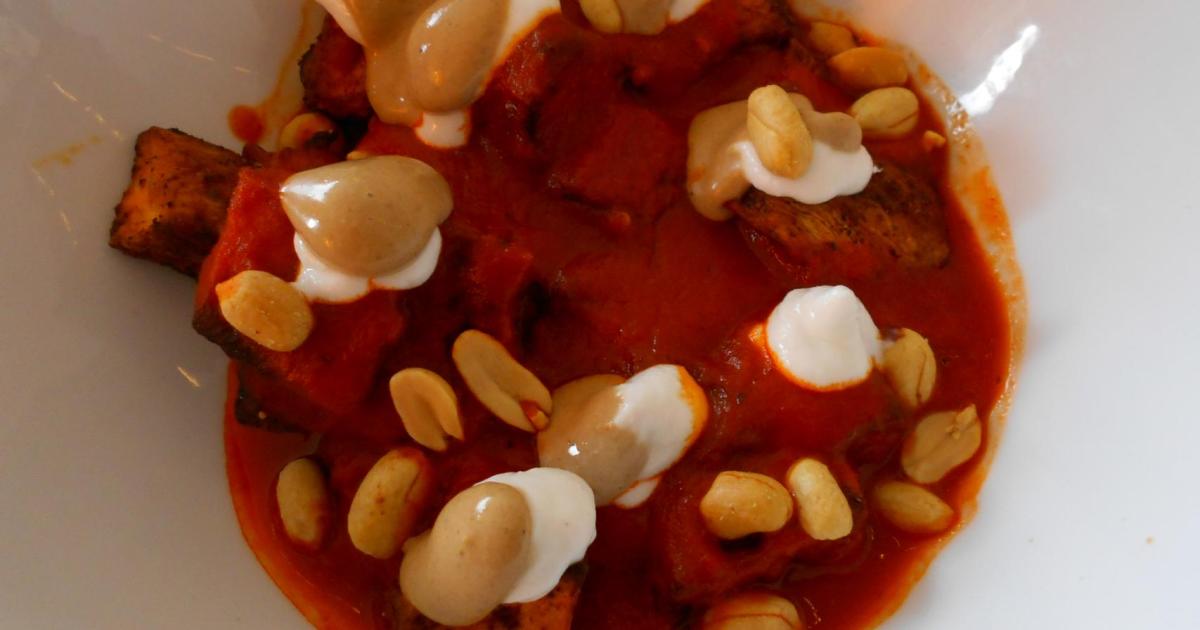 The law of averages is a supposed mathematical principle stating that future events are likely to occur such that they balance out all past outcomes – the assumed average. Applied to eating out, that means if I had superb meals in a certain place, then one day there will be culinary mistakes galore – and the law of averages will have come into play again.

Well, I had absolutely superb menús del día at the Sky Bar of the Hotel Almudaina in Jaime IIIwith his breathtaking view of the bay of Palma with the cathedral standing majestic and decidedly on the left. So by this alleged law, I have to make more than a few culinary mistakes – and that’s exactly what happened on a recent visit.

It was not this a few dishes didn’t even get a passing grade (usually a 5-5.9) but there were service outages that I never encountered at the Sky Bar.

The disappointing first course was the one called ‘bravas Almudaina’, the Sky Bar’s version of a traditional Spanish tapa called “patatas bravas”. This is a dish of boiled or fried potato wedges served with a hot sauce – the “brava” part of this dish. This word “bravo” (“brava” is the feminine form) can mean fierce (when applied to a fighting bull, for example) or rough when referring to rough seas.
When used for the hot sauce in this potato dish, it means spicy hot – sometimes ultra spicy hot. Some bars boast that their ‘patatas bravas’ are the hottest in town – any city in Spain, not just Mallorca.

Those Sky Bar “bravas” were definitely not the hottest in town – they’re not even the hottest on Avda Jaime III. In an interview many years ago, John Lennon was asked if Ringo Starr was the best drummer in the world. “Ringo isn’t even the best Beatles drummer” Lennon replied, somewhat rudely and cruelly. Or maybe it was a Liverpudlian joke.

The Sky Bar version of ‘patatas bravas’ was completely lack of spicy heat (which isn’t necessarily a bad thing) but there was a lot going for it in the texture. It had a fair amount of peanuts, which not only added their usual extra layers of flavor, but also created crunchy textural contrasts.
But in the end this version of ‘patatas bravas’ was a failure. Someone in the kitchen should have realized this and it should never have been on the menu.

The other dish that didn’t measure up (when was the last time you heard that very English expression?) was on the menu as ‘salty sepia’. “Salteado” in a culinary context means that an ingredient (in this case, chopped cuttlefish) is sautéed over high heat so that it has a golden exterior and is juicy on the inside.
But what was on the plate was a dish of cuttlefish that looked more like a soup than a stir-fry – another glaring case of cooks giving a dish a name that has nothing to do with what is on the plate. Someone in the kitchen (the head chef, perhaps) should have realized that you can’t call this dish a “salteado” when it is a thick and very flavorful soup.

I had asked for fries with this dish but what I got was fried potato matches with a crisp-like texture – and, like the crisps, they probably came straight from a packet.

The kitchen thankfully went back to its usual 10 rated cooking with the desserts so the law of averages didn’t work with them. A pear tarte tatin with ice cream was quite sensational and a traditional Mallorcan ‘gató’ was a round individual and was also served with ice cream. Both received 10s immediately.

The Sky Bar offers breathtaking views over the bay of Palma and the old town. And what’s on the plate is also worth watching and eating.

When I eat at Sky Bar I usually have the €17 menú del día which is excellent value – one of the best in central Palma at this price. The prices for the a la carte dishes are normal, although the starter and main course were not up to the high culinary standards I usually get at Sky Bar. In both cases, the kitchen was responsible for serving two dishes with the wrong names – a flaw I keep encountering all over the island, not just in Palma. Their version of “patatas bravas”, a well-known dish of potato wedges (boiled or fried) was served with a hot sauce, but the cooks messed with this dish and their supposedly modern version just didn’t work. not worked. It was the same with the “salteado de sepia”. It should have been a sautéed dish of chopped cuttlefish and vegetables, but they served a thick soup instead. This is not the case. Fortunately, everything is back to normal with the desserts. The chefs at the Sky Bar take great care of the desserts and they are always very good. One was a pear tarte tatin with ice cream which was the most successful. The pear halves were cooked in red wine and the batter had the right texture. Their ‘gató with ice cream was a small individual sponge cake which also had the correct texture and taste. The cooks didn’t mess around with these well known and loved desserts and each was worth a 10.

Sky Bar, Hotel Almudaina, Avda Jaime III 9, Palma. Their menú del día is served Monday to Friday, with à la carte dishes on Saturdays, Sundays and holidays. I went there on a Sunday, so I had a la carte dishes.