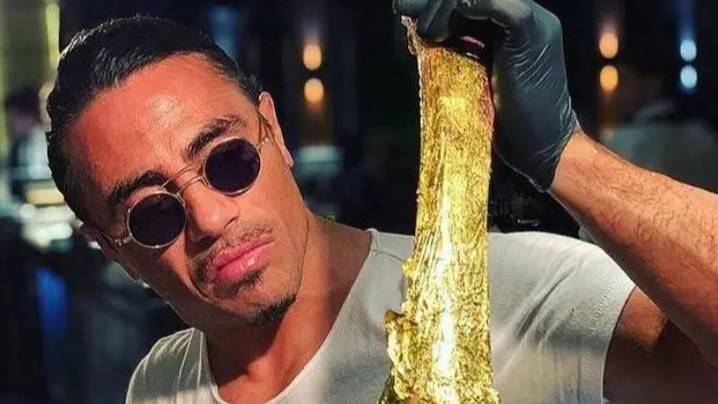 Salt Bae – real name Nusret Gökçe – has a number of restaurants around the world, but his recently opened Knightsbridge restaurant made headlines shortly after opening for its £100 burgers, £11 cans of Red Bull and £850 golden Tomahawk steak sprinkled with gold. leaf.

But now the manager, Mr Mehmed, has spoken out in defense of the prices, insisting it’s worth what you pay.

He told My London“Some people just want to talk. People have complained because they’ve seen bills on social media for people who paid £10,000 for a bottle of wine.

“But you can find these prices all over London. The service and quality we provide is extremely high.

“It’s more interactive than most restaurants – we cook and prepare the food in front of you, like our traditional baklava, which is a hugely popular dessert.”

Speaking of the gold leaf steak, he explained the fancy touch ‘doesn’t improve the taste or change the quality’ of the meat, but insisted it was ‘the best in London “.

The restaurant has proven popular with celebrities, with David Beckham and Gemma Collins both having visited since it opened.

The manager believes the restaurant provides a top notch experience for diners.

Mehmed added, “We are also successful because the brand is popular and well known to customers around the world.

“We show hospitality, we show everyone to their table and cut the meat in front of them.”

The salt-dusted chef announced last month that he was leaving his London restaurant to travel to Saudi Arabia to open a venue in Riyadh.

Taking to her Instagram Story, Salt Bae wrote, “Sunday [7 November] is my last day in London. I will go to Riyadh to open my 28th restaurant.

“Sunday is my last day at Lovely London. I want to see you lovely people before I go.”

He became a social media sensation thanks to his unorthodox seasoning method which was revealed in 2017. Today, he owns a global chain of steakhouses.

And Mehmed claims the one in London is the most successful, telling My London he’s made more money than any of the others.

He told the outlet: “So far so good.”