Review: Deepdale restaurant with no good reason not to season 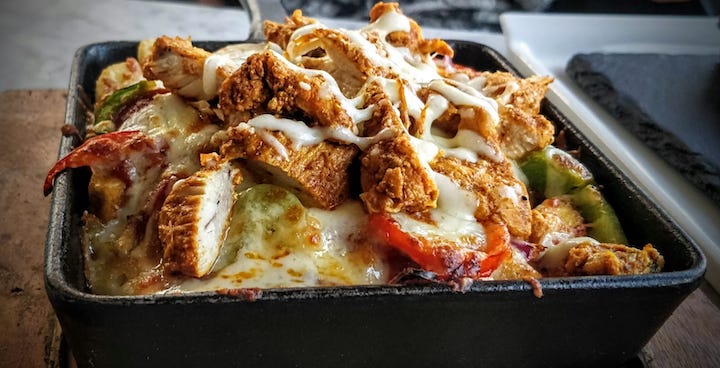 Review: Deepdale restaurant with no good reason not to season

The sequel in Preston’s Blog series on best and worst rated restaurants is Marco and Carl in deep valley.

Carl’s lack of an apostrophe and ‘s’ at the end plays hell with my spell check app, which keeps trying to passive-aggressively correct my grammar. It is concluded that I must have eaten a meal inside an individual named Marco and another individual named Carl, simultaneously. Incredible breakthrough in quantum physics aside, I don’t want him thinking about how and where we could have gotten in. Not a good start.

Hitting the bottom of opinions, halal restaurant Marco and Carl garnered comments such as “the only thing worse than the food is the attitude of the staff”, and repeated claims that the meals were “cold and tasteless”.

I took my daughter Zero point with me to make up for our horrible experience at the Twelve Tellers which, if Marco and Carl’s reviews are accurate, was like apologizing for a thumb in the eye with a punch in the throat. However, it had to be done and unfortunately it was in the wrong place at the wrong time, like the Fishergate Bollard or Liz Truss.

As there were so many reviews mentioning the attitude of the staff I was a little apprehensive but we were warmly welcomed, shown to a window seat and handed menus.

The choice was huge so it took us a while to decide what to have and the patient waiter came to take our order three times before we could give it. We finally got there and after a short wait our food started to arrive.

A starter of crispy fish pakoras for £5.90 was seasoned with curry spices, but not overwhelmingly so. It came with a mint dip which we found too vinegary and heavy with mint, more like a tub of mint sauce than a fresh mint raita.

Another starter of yoghurt bombs for £4.50 – described on the menu simply as Indian street food – consisted of five small crispy filo-like shells with seasoned yoghurt and what could have been spiced chickpeas to inside, which were tasty but underfilled.

A third spicy bread entree looked like a stuffed crust pizza that had been half eaten by someone who doesn’t like stuffed pizza crusts, but was still appetizing to look at. It was loaded with hot sauce, cheese, red peppers and spring onions, but oddly it didn’t taste like anything other than peppers.

The next dish we tried was the Mumbai loaded fries. It was generously topped with mozzarella cheese and chunks of chicken tikka with a few slices of chilli tossed into the mix, although the red onions mentioned on the menu were absent. It looked good, but was lukewarm, the chicken was dry, and there was little flavor overall.

This didn’t bode well for my flamboyant chicken burger, which surprised us by being the highlight of the meal. The chicken was spread out in the bun and hanging from the sides like Jacob Rees-Mogg on the front bench, and was beaten thin, unfortunately unlike Jacob Rees-Mogg who is naturally thin. This technique made it possible to season and bread a larger surface. Unlike the chicken on the loaded fries, this one was perfectly cooked with no trace of dryness.

The salad on the bun was lacking, especially compared to the photos of the flaming rocket-studded burger on Marco and Carl’s Facebook page. Judging by the rest of our fried order, you’d assume a lack of salad would be welcome, but I would have at least liked the chance to scrape it myself. Other than that, there was plenty of flavor, so we know someone in the kitchen had access to the seasoning. I hope I didn’t cause them any trouble.

I had chosen to turn my plain chips into masala chips, but like the loaded chips, they too were barely warm, and the masala sauce added a nice color and a bit of sweetness but no flavor.

The cold and tasteless food issues that have been reported most often in online reviews still seem unresolved which is a real shame as this should be an easy fix. The decent quality ingredients and generous portions are already there (apart from the underfilled yogurt bombs), but the relentless lack of noticeable seasoning let everything but the fish pakoras and the chicken burger down. Using a stronger tasting cheese like cheddar or feta instead of mozzarella would have been better.

Like the town of Footloose, Marco and Carl would need a visit from a Kevin Bacon-type character, but instead of just dancing, he stuffed his pockets with salt, pepper, chili, and garlic at Grande Jeté. in front of the tables, giving all the jazz -but seasoning on everything before moving on to the next branch without trying to sign us up for EE if he can get away with it.

Another huge positive for Marco and Carl, and despite numerous complaints about rude staff and poor service, was that we couldn’t have asked for a better waiter. They were happily professional, working hard to do all they could to ensure diners were catered for, which along with the modern, comfortable decor and good quality ingredients left us open to making a another try in the hope that management has taken notice of the reviews that so often mention cold and bland food and acted on it.

Despite the negative issues we and others have encountered, I don’t believe Marco and Carl deserve to share the same murky plan as places such as The Twelve Tellers where cheap, frozen, microwaved slurry is served. A few tweaks to recipes and improving the speed at which food is transferred from the stove to the table could make eating there a much more enjoyable experience.

Were you inside Marco and out of Carl? Let us know if you’re still friends in the comments..