Restaurant reviewer Legare: A love letter to my new favorite Italian in London 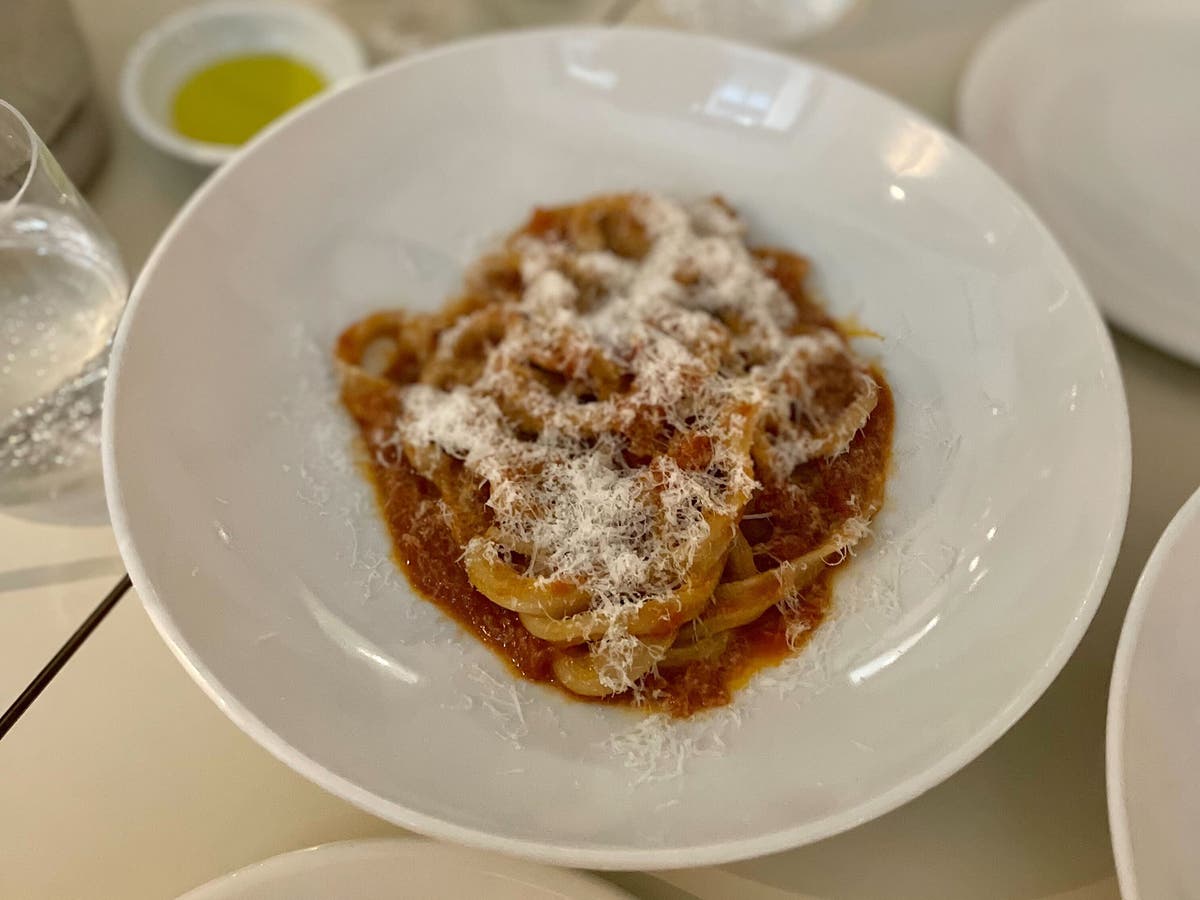 Restaurant reviewer Legare: A love letter to my new favorite Italian in London

OWhen reviewing restaurants, or when reviewing anything really, for a living, it seems obligatory to find a flaw in order to present a balanced view. This is not one of those criticisms. It’s actually a love letter to a restaurant that I think isn’t talked about enough: Legare, your friendly neighborhood Italian in Tower Bridge.

When it received a Michelin Bib Gourmand in 2021 – alongside food ‘cool club’ favorites Fallow, Flor and Peckham Cellars – it should have exploded. David Sexton gave it an unfavorable review in the evening standard and he hasn’t appeared in a national since. I’m honestly puzzled as to why. Perhaps that’s because it opened relatively quietly in 2019 and was almost permanently overshadowed by its bigger, better-known counterparts. Maybe that’s because it’s close to Padella, one of London’s many really good Italian (or otherwise appropriate) restaurants. In all honesty, it’s easy to miss it if you’re not deliberately trying to find it. Maybe it’s because his menu is short and sweet and constantly changing: you’ll never have the same thing twice, even if you go the same week. Personally, I think at least two of these reasons are excellent qualities in a restaurant.

Co-founded by Jay Patel (ex-GM of Barrafina) and Matt Beardmore (former Trullo chef), Legare does things a little differently than its competition. Where Big Mamma goes…well, big, Legare goes small, intimate, unassuming and unfussy. Its functional interiors remind me more of a modern Japanese restaurant than an Italian restaurant. But don’t be fooled by appearances: the cuisine is dynamic and inventive. The menu is compact, but that just goes to show how menu writing is an underrated skill. If you can condense food as excessive as Italian into less than 20 dishes, create a flow and keep it seasonal, competitive and interesting enough to keep people coming back, hats off. It’s also the perfect size for a quick lunchtime snack or something more substantial for dinner.

When we arrive, hot and embarrassed in a sticky 25 degrees (those were the days, huh), our charming and passionate waitress Alice stops short of recommending each thing on the menu. Well, I told you it was small. Does it complicate or facilitate the choice? The craving for a dish is much more acute on the smaller menus. For starters, I feasted on a single oyster (£4 each), which was (almost alarmingly) large, plump and brackish, served as it should be: on a bed of ice with shallot vinegar and tabasco. It reinforced my belief that you don’t have to be on the coast – or at Bentley’s – to find a decent shellfish and that quality is always better than quantity. They’re often best enjoyed that way, appetizer-style.

I can’t remember a restaurant I visited recently where there wasn’t a crudo-style dish on the menu – a no-cook starter is a godsend for chefs and time-strapped diners I guess – but I won’t soon forget Legare’s sea bass carpaccio (£20). Subtly sweet raw fish paired with honeydew melon and fennel is the perfect antidote to the sweltering weather, best washed down with a special glass of wine, a Marco de Bartoli Grillo Vignaverde. It’s young, fresh, and crisp, and goes just as well with light seafood as it does heavier pasta dishes (all of their wines are low intervention if you’re the kind of person who cares about that sort of thing). Our second entree are the zucchini trombetta (£12), sliced ​​and marinated in oil, chilli and mint, then topped with a veritable mound of the criminally underrated ricotta salata. If you’ve never had the very fit NSFW Trombetta, you to have to go out of your way to get one. More delicately flavored and less watery than those found in supermarkets here, this is undoubtedly one of the best varieties. And served simply that way is probably the best way to enjoy it.

Legare also fights amply in the pasta circle. We chose two options out of only three, but when Alice asked us as she was cleaning our mopped plates which I preferred, I honestly couldn’t say. The pici (fatty hand-rolled spaghetti) with burro e oro sauce (£16), which literally translates to ‘butter and gold’, takes me back 15 years to every other weekend spent with my dad. Burro e oro is not gold but onion simmered in tomato puree with a good dose of butter (in this case, the good stuff: brown butter) and that’s exactly what my father cooked my brother and I, often hours later than planned so we were so hungry we thought it was the best thing in the world. In this job, I often feel so much pressure to choose the most adventurous thing on the menu – although from experience that doesn’t always mean the best – that I forget how much joy there is in the simple things. . This simple thing had a lasting impact: I’ve done at least three variations of it at home since my visit last week.

How could I compare this to crab ravioli (£22), with charred kernels of corn, dried and fresh chillies for slow combustion, ubiquitous brown butter and the ‘milk’, AKA the pulp and juices, that you get by squeezing the corn husk? The result is a much deeper level of flavor that is both sweet and starchy. It’s a dish that gives you everything: full homemade flavor, intense satisfaction and just a hint of confusion. Definitely order yourself the freshly baked focaccia (£5) as a cleaning tool. It seems almost redundant to add that we ended with a cannoli (£5 each) to share. It’s a mainstay on the menu and on this occasion it was filled with orange ricotta cream and dipped in dark chocolate. I’ve said it before and I’ll say it again: don’t come to me for dessert reviews. But go to Legare for the cannoli.

In fact, you should go to Legare for…everything. The food. Wine. The vibrations. It offers elegant and modern Italian cuisine, without pomp or artifice, but with this endearing service from people who love it as much as I do. My only complaint has nothing to do with the food but with the ventilation: the windows don’t open and with an open kitchen in such a small space, it’s not for hot days unless you can get a of the few tables outside. If their recent collaborations with the Garden Museum Cafe and 180 Corner on the Strand, or the upcoming pop-up at the Savor Festival in West London are anything to see, Legare might finally come into its own. I hope this review (if you can even call it that) sends you running there.