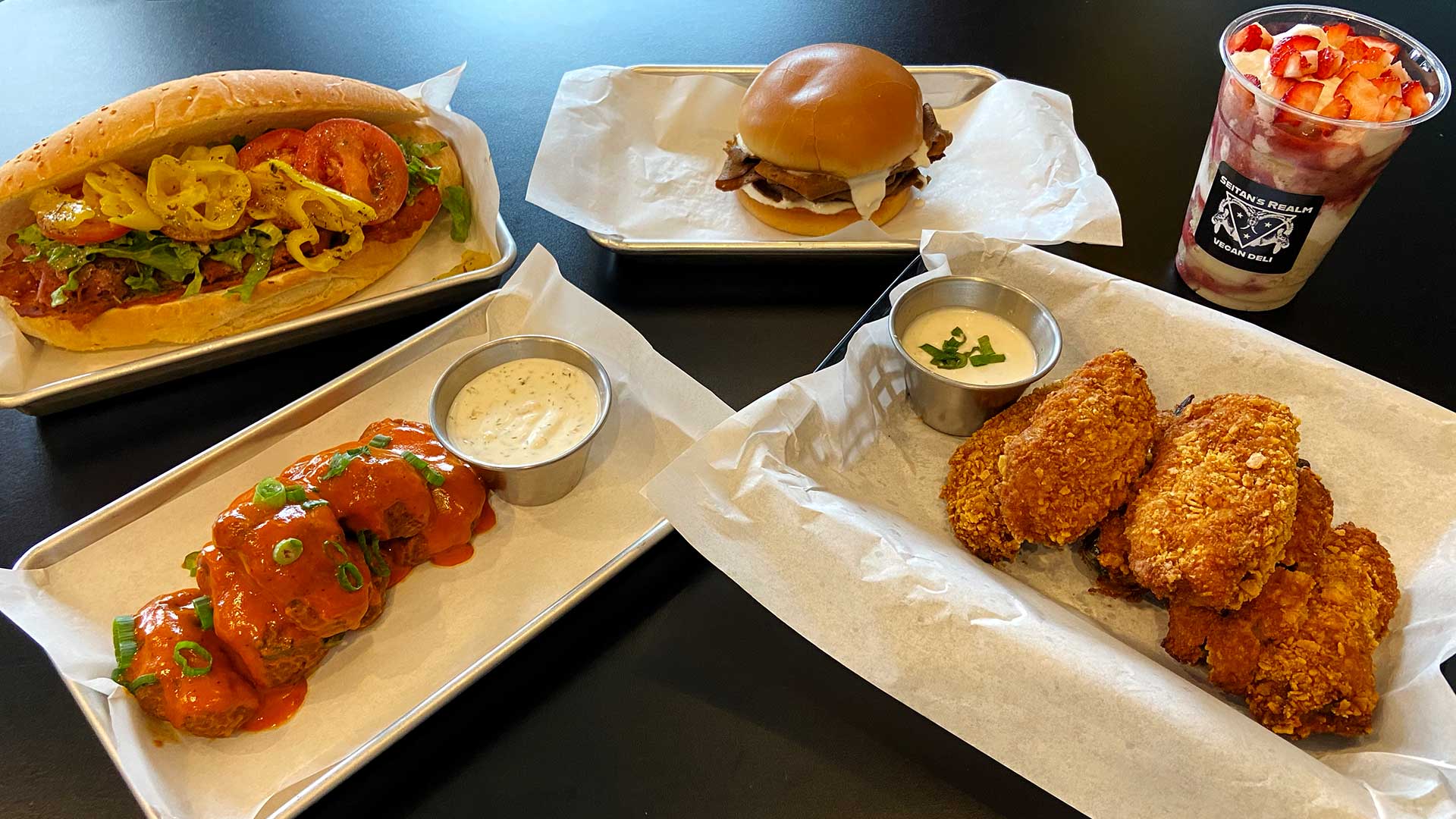 Seitan’s Realm started as a food truck project that turned into a brick and mortar in Clintonville. And while Satan’s realm’s phonetic cousin might be associated with animal sacrifice, no such nonsense is present in Seitan’s realm. In fact, no animals are present at all…well, except for the ram’s heads on the logo.

Philosophically, there are basically two ways to enter the Columbus vegan market. One way is to work with vegetables in natural forms; to celebrate the glory of roots and fruits and leaves and grain: no imitations, no disguises. The Little Eater stops were good examples of this (and there are always pop-ups). The other approach to vegan cooking is to take advantage of plant-based ingredients to create familiar, comforting imitations of animal foods, like burgers and nuggets. Seitan’s Realm is firmly in the comfort food camp.

And as long as seitan is on the menu (we’ll get to that), the starting point should be home. Jalapeño Poppers ($15). They offer the traditional base of breaded jalapeños, stuffed with vegan cheddar and cream cheese substitutes with vegan bacon. Is it exactly like traditional poppers? Nope. Is it still really crazy? Damn yes! The crunch-coated jalapeños have a pop, and the cheese and bacon substitutes deliver the requisite creamy salty taste that makes it crave-worthy. Plus, the house adds a tangy horse sauce, which prevents palate exhaustion from setting in as you progress through the order.

The establishment’s namesake seitan comes into play in the buffalo wingz ($12). More rounded than conventional versions, the meat substitute isn’t particularly chicken, but it does make a good host for classic sauce and ranch, and both condiments carry the wings.

Seitan’s Realm describes itself as a delicatessen and a good portion of the menu is dedicated to its deli options. The classic ($8) features a welcome return to horse gravy, with classic thinly sliced ​​roast “beef” served on a sesame seed bun. Even if it’s the right color, you won’t think “beef” is roast beef. But he doesn’t need to be indistinguishable from the cow to accomplish his mission. Come to think of it, some animal deli meats are so processed that they don’t really look like beef either. The “beef” is piled high, ultimately resulting in something resembling a pleasant sandwich experience, even though the meat element is indeterminate.

the italian stallion ($12) is another take on a deli classic, this time with homemade pepperoni and ham, plus lettuce, tomato, banana peppers, mozzarella cheese and Italian dressing, served on a hoagie roll. There’s a lot going on in this one, and the traditional plant elements add a lot of appeal. Plus, the pepperoni is unique, homemade, and lovely in its own right.

Dessert options offer a choice between good and bad with the Devil’s Cup and Angel Cup. You can even pit them against each other, you know: for an epic battle between good and evil. While the chocolate in the Devil’s Cup seems like an unfair advantage, the angel cut ($8) is a perfectly capable contender with layers of white cake, vanilla pudding, strawberries, and whipped cream. Pudding is a secret weapon in any dessert, and that really makes the combo special.

At its core, Seitan’s Realm is an irreverent and cozy place, with walls adorned with campy horror movie posters and enough faux religious artifacts to offend any loyal sensibilities (likely including Satanism). It’s all ironic; explorers of all kinds will feel welcome. It is located at 3496 N. High St.

* Which, as a little Google search points out, is not so much an animal head, but the head of a mythical satanic creature Baphomet; he has a human body.