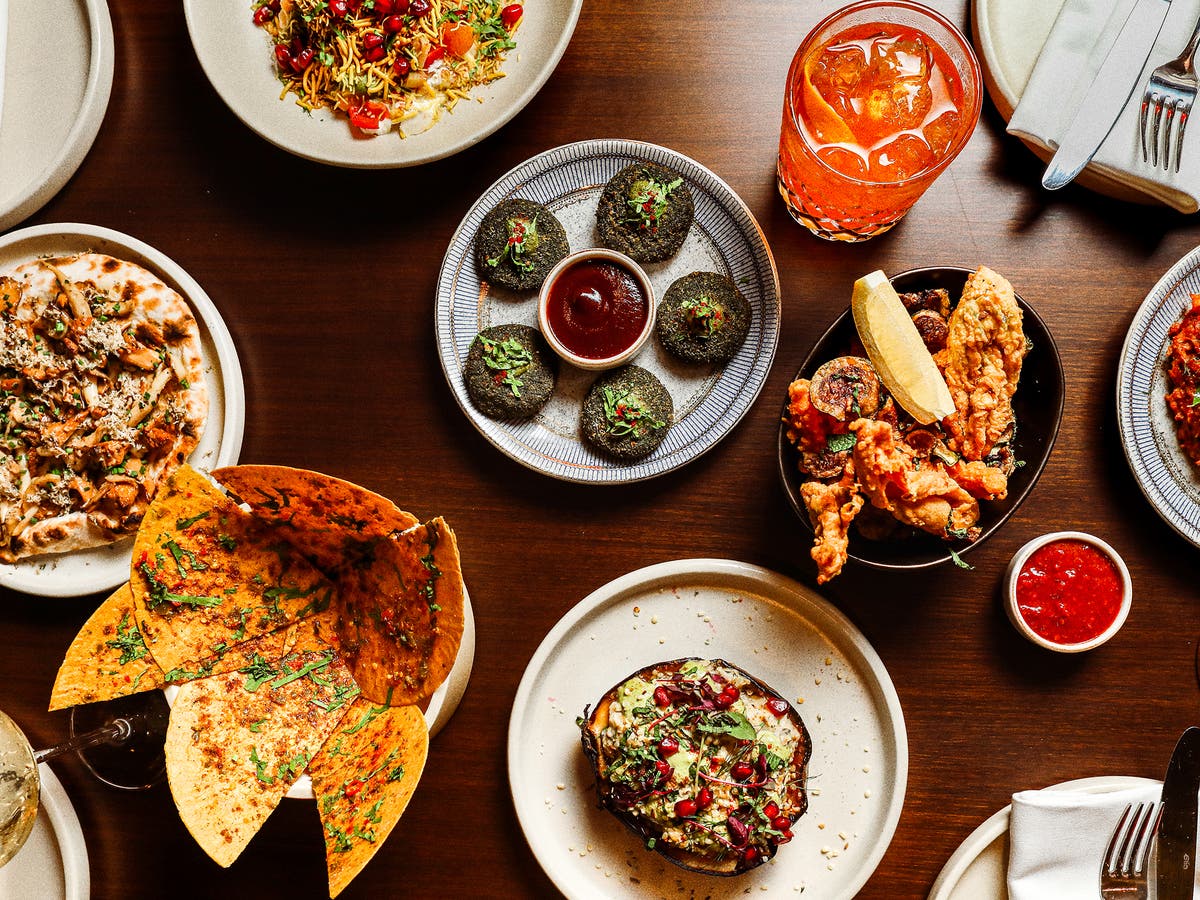 LLately I noticed the smell of a restaurant when you first enter. At Park Chinois, the vast majority are truffles; at Cédric Grolet at The Berkeley, it’s rich in butter; but at Pahli Hill, a chic Indian outfit in London’s Fitzrovia, it’s hard to describe.

Certainly, an intoxicating blend of Indian spices wafts through the air. But it’s more than just a scent – it’s an inviting feeling, like someone wrapping you in a woolen shawl as you come in from the rain. Or maybe it’s just the warm glow of the open kitchen, showcasing the colors of the eclectic artwork that sweeps across the indigo blue walls of the dining room. I suppose you could call the overall effect a transport, taking you from dreary London to the restaurant’s roots in the tropics.

Pahli Hill is actually two concepts in one space. Upstairs, you’ll find Pahli Hill, the spacious, family-friendly dining room named after Pali Hill in Mumbai, a bustling neighborhood that’s home to people from all over India. The spelling variation is deliberate, as another London restaurant has a similar name. Similarly, the cuisine draws inspiration from all over India, and perhaps Bangalore in particular, where its chef Avinash Shashidhara is from.

The basement is home to Bandra Bhai, a bar and live music space named after the nearby Bandra suburb. Richly clad in velvet and brass and adorned with a stuffed peacock, the shameless speakeasy is a nod to the smugglers who oversaw India’s thriving black market. It’s only open in the evenings and feels a lot less reputable.

When I sat down to Sunday lunch with my mother a few weeks ago, the Pahli Hill dining room was still quiet; we pretended to be on vacation and people watched while we waited for our order. The guests were as different as the two spaces. In a corner, near the covered windows, a solitary guest was deeply absorbed in her book. A couple on the bank of wooden sofas next door sat side by side as they slipped into a lavish display that is just hidden from view. A family with a baby is cocooned in the far corner, shielded from the hubbub of the main dining room by a lattice screen.

Within minutes, a steady stream of plates interrupts our viewers.

Next, the Dorset crab sukka. At Pahli Hill, that means a rich, spreadable paste of white and brown crabmeat – rather than the usual whole beast – flavored with a heady blend of ginger, coconut and spices. The consistency was just enough to generously smother the pair of Mangalore brioches, an airy puff pastry made with bananas and flavored with fennel seeds. Shashidhara is playful with the combination of flavors and ingredients here, in part because he spent a decade cooking Italian dishes at the River Cafe; and partly because… well, why not?

We also get a few cocktails – a pineapple mint daiquiri and a Pahli whiskey sour – but none turned out to be quite what we imagined. The former was closer to a tropical martini while the latter was more sweet than sour. Never mind. The flavors were quite nice for the food.

When the sector arrives, we realize that we were wrong.

The menu is divided into small plates, tandoor and grilled meats, large plates, side dishes and desserts. Like most pedestrian diners, we are conditioned to think that the dishes in the middle sections were the main courses. Except in Pahli Hill, each section is more like a different style of cuisine. So to get the most out of it, we should have picked something from each section and tried them all together.

For example, our grilled lamb chops and mango marinated wild sea bass were perfectly adequate, but compared to the punchy flavors of the first two courses, these seemed bare, if not a little underwhelming. Similarly, the naan-style tandoori roti and flaky flatbread (similar to a small paratha) were great for scooping up the delicately spiced black dal, but they would have been much better used for mopping up smears left on the papdi chaat plate. And oh reader, when I spotted the gloriously oversized dosa, with tiny pots of chutney and sambar (vegetable stew), going to another table, the urge to eat was too strong.

We received a second round of cocktails as a consolation prize: a trusted negroni – spicy, of course – and a tamango (vodka, Cointreau and mango puree with a dash of tamarind syrup and lemon juice) in anticipation of the Alphonso mango cheesecake and carrot halwa we ordered. The thinly sliced ​​Alphonso, the first of the season, was so obscenely flavorful that it didn’t need the cheesecake at all. And the richly sweet and sticky carrot halwa was a heartwarming reminder of a childhood spent grazing the dessert counters of Leicester’s Golden Mile. Things were firmly back on track – not that they had ever really gone off the rails.

As I left the restaurant, the bold flavors still tingling my tongue, I marveled at the tranquility of the dining room, which had recently been awarded a Bib Gourmand, the Michelin accolade for “restaurants of good quality and good value for money”. It was never crowded while we were there, but it was well worth packing.