Restaurant review: Looking for signs of Lyon at Le Gratin by Daniel Boulud 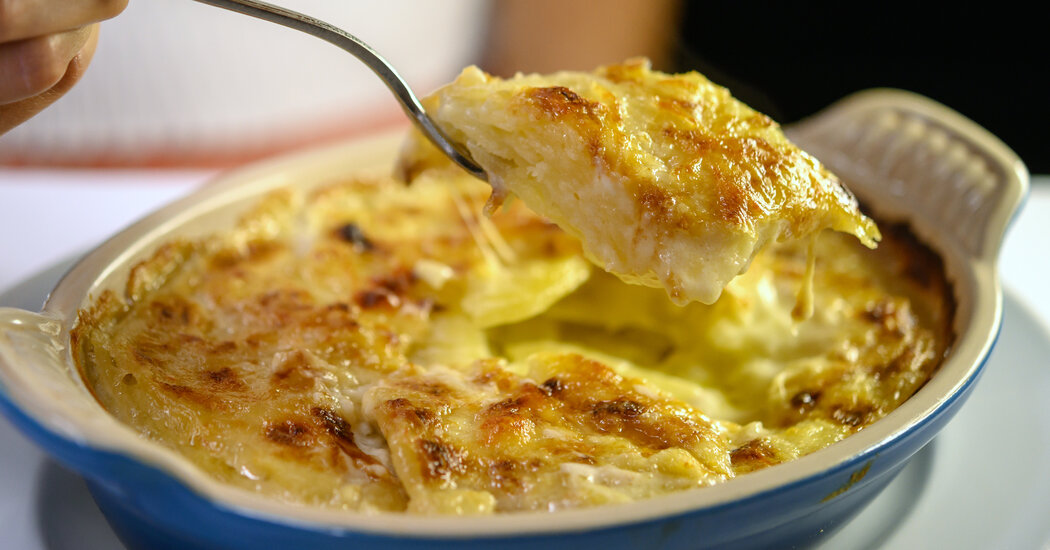 Restaurant review: Looking for signs of Lyon at Le Gratin by Daniel Boulud

Until he opened one, no one seemed more qualified to run a Lyonnais-style cork in New York than Daniel Boulud. Then along came Le Gratin, and it became clear that he was the wrong person for the job at all.

Le Gratin, just south of City Hall in the space once occupied by Keith McNally’s Augustine, bills itself as a “bouchon Lyonnais” on its website, menu and huge curtained windows. But a visitor from Lyon walking through the door on Rue Beekman might find it hard to see the connection.

Like bodegas in New York, corks are central to Lyon’s identity but are rarely reproduced, or even understood, outside of it. In “Dirt”, his book on the art of eating and cooking in Lyon, Bill Buford defines a plug as “a place where you enter to drink and eat, sweat, stand on the table and sing in the middle of his meal. Roughly speaking, if restaurants began as stages where French aristocrats could flaunt their sophistication, and bistros as places where the bourgeoisie could flaunt their respectability, the Lyonnais corks were places where weavers and other silk workers could put their elbows on the table, drinking too much cheap wine and gorging on organs and leftovers until it was hard to get up.

The open-necked, fun-seeking mind of a cork is probably impossible to import unless you also find a way to import a room full of Lyonnais. The food, however, is easier to replicate, and few American chefs know Lyonnaise cuisine more intimately than Mr. Boulud. He grew up on a farm outside of town, received his first cooking training at what was one of his main restaurants, and became famous for his careful and harmonious elaborations on the food of his childhood.

He and Guillaume Ginther, his executive chef at Le Gratin, could have reproduced and developed the essentials on the cork menu: eggs in red wine sauce, kidneys, pork snouts, sweetbreads, caviar from Croix-Rousse. (lentil compote named after a district of Lyon, in a self-deprecating reference to the city’s low-budget appetites), perhaps even the pan-fried andouillette, a gut sausage that, thanks to its insistent porcine smell, is more polarizing than foie gras.

That’s not what they did. Instead, they produced a slew of French and French dishes that can be found all over Manhattan, though not necessarily as good as Au Gratin.

Here is your crab salad with avocado and pink grapefruit; your steak tartare “à la Parisienne”; your spaghetti with pesto à la niçoise; your salmon poached in olive oil with sweet peas; your grilled branzino with caramelized fennel and virgin sauce.

After the complex and diabolical fantasy of the Pavillon, Mr. Boulud’s latest restaurant, it’s a pleasure to see what he can do with a cuisine that is altogether simpler and more direct. Apart from its habit of overcooking fish, the kitchen has a solid command of the technique. Terrines, pâtés and rillettes could form the program for a charcuterie course. Most of the flavor combinations have been around for ages, but Le Gratin always manages to sharpen and refine them, one of the hallmarks of Mr. Boulud’s work. Saffron perfumes the cream at the bottom of a bowl of fatty mussels; the sauce on slices of duck breast, juicy and pink, buzzes with green pepper.

But you really have to hunt around to find the dishes from the cork. The cervelle de canut – herbs and shallots beaten into fromage blanc to make one of the best cheese spreads in the world – is hidden in the beet salad. More obviously, there’s a Lyonnaise salad with slices of braised bacon and big chunks of pickled-glazed chicken livers, a glorious piece of excessive meat that any cork would be proud of.

Best of all, however, is the pike quenelle. It’s fantastic, not just a strange evocation of the spirit of Lyon, but a summary of the whole Boulud approach. This alone is worth a trip to Le Gratin.

In Manhattan, pike dumplings are usually pretty football-shaped pike balls grilled under a coral-colored dress of Nantua sauce, the form they take at La Grenouille, Le Coucou, and Benoit. Canonically, Nantua sauce calls for crawfish. Lobster is almost always used in New York; it’s easier to find, but it gives the dish a luxurious glow it didn’t originally have.

From a Boulud family recipe, Mr. Boulud and Mr. Ginther create a quenelle in a completely different style, which you can still see in Lyon but less often than in the past. Each serving is a single, long, flat pillow-like quenelle, almost as light as a soufflé, but not so light that it falls apart on the tongue. It is grilled in a bechamel bath which does not taste of lobster but of mushrooms, fish and Gruyère. I’m not sure this heightened béchamel is more delicious than the Nantua sauce, but it’s a better and more thoughtful pairing for pike dumplings, and a definite counter-argument to the idea that fish and cheese don’t don’t go together.

The other indisputably great dish, the potato gratin, comes from Mr. Boulud’s mother, Marie, who still lives in France. (When your restaurant is called Le Gratin, it’s better to have a gratin, and it’s better to be good.) Once you’ve tasted either, you want Le Gratin to have a whole menu full of modern interpretations of Lyon cuisine. , as does Le Bouchon des Filles in Lyon. At the very least, you would have liked Mr. Boulud to call his mother more often.

There are so few classic corks on the menu that one begins to wonder if Mr. Boulud doesn’t trust New Yorkers to warm up with real Lyonnaise food – the whole bucket of tripe. If so, it’s out of step with many young chefs who scour their parents’ and grandparents’ cookbooks for recipes that might have scared off an earlier generation of American diners, but are now being eagerly embraced. . From the blood and intestines of CheLi’s amazing Shanghainese mao xue wang to Falansai’s Vietnamese duck necks to Dhamaka’s testicle stew, the approach is unapologetic, a word Dhamaka owners have adopted for the name of their group of restaurants.

I’m relieved to say that Augustine’s chipped terrazzo flooring, wall tiles decorated with large, voluptuous flowers, and the rest of the interior details were left virtually untouched. Kristyn Onasch’s desserts, like cream puff surrounded by roasted cherries, are sophisticated and seasonal. The front of house team are deeply professional but also pleasant, a combination that makes you want to come back.

There is, in fact, a lot to enjoy at Le Gratin, but it probably won’t get you up on the table and singing along.