“The hue of hydrangea, reflected in puddles of rain, just exists today,” reads the haiku on the cover of our omakase menu at the new Kiyose.

Named after the term referring to the seasonal and intentional language used in traditional Japanese poetry, the refined restaurant kappo kaiseki occupies the space previously occupied by Yoshi – which closed when chef Yoshiyuki Kashiwabara left for Japan – in the basement of the Forum the Shopping Mall.

The intimate space can still accommodate up to 16 people around the counter and seven in the private dining room, although the visually striking new combination of red wood and black marble interiors certainly helps Kiyose stand out from its peers. . 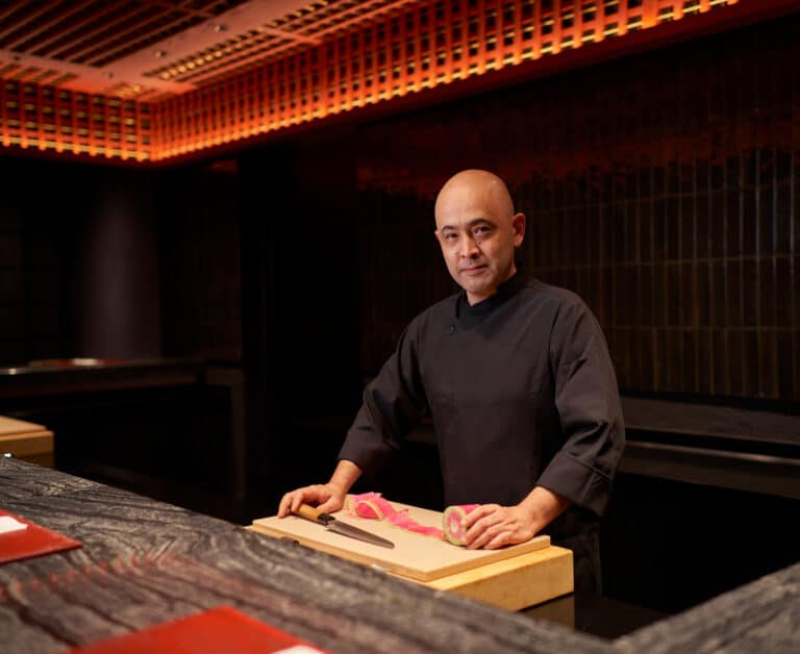 Kiyose is led by Chef Shimpei Taniguchi, a Hiroshima native who spent his formative years being exposed to the diversity of ingredients born from the Seto Inland Sea and surrounding Chugoku Mountains.

These bounties sparked an interest in his country’s traditional cooking practices, and after rising through the ranks at Miyajima’s more established ryokans, Shimpei-san is able to present his own artistic vision of cooking to Kiyose, where flavors , bold textures and presentation come together for an undeniably enjoyable dining experience. 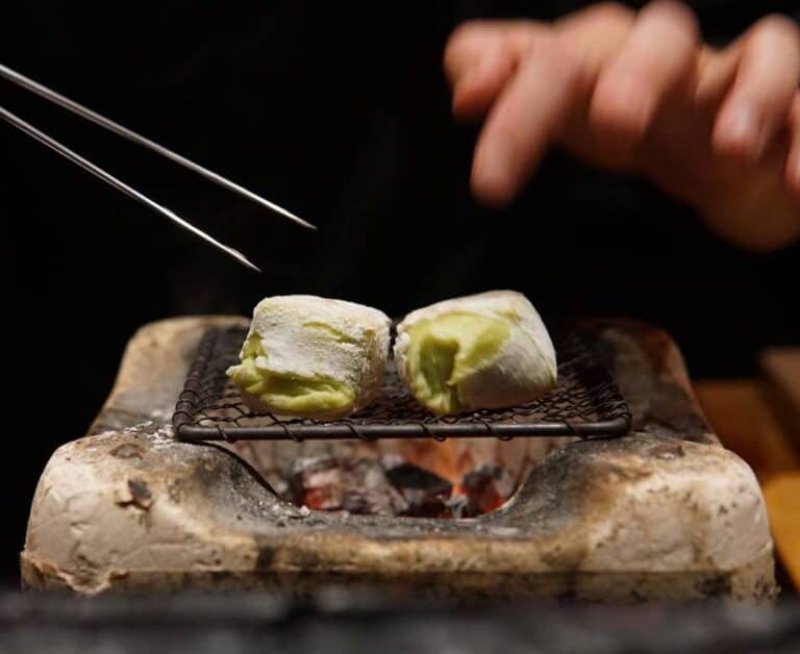 Open for lunch ($128++) and dinner ($248++/$288++), our evening meal started with Yaki Edamame Tofu. Cooked for nearly an hour over constant heat before hardening, the tofu is lightly dusted with arrowhead root powder before going on the grill.

Topped with salted mullet roe, its structure holds even when we sink our teeth in to savor its mild flavor and texture. 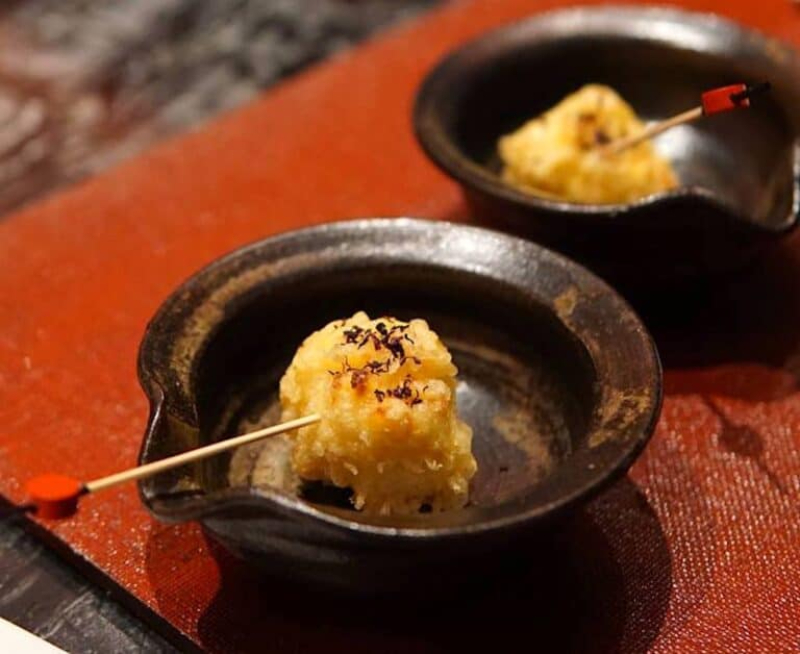 The Kaisen Mozukusu was equally delicious, where the simple side dish of Okinawa seaweed in vinegar is enhanced with sweet fish (June is ayu season) and seared scallops.

Another wonderful marriage of textures that whets the appetite with seasonal Japanese white onion jelly, cucumber, tomato and ikura.

After a tasty piece of seasonal corn tempura, stuffed with white fish and scallop batter, comes the Chawanmushi with tiger prawns. Served with a layer of heady shrimp broth, Chef Shimpei’s version of this Japanese staple for special occasions is comforting and delicious.

Each scoop of custard yields an ingredient like mixture of mushrooms, firm tiger prawns, sweet peas, and fish. 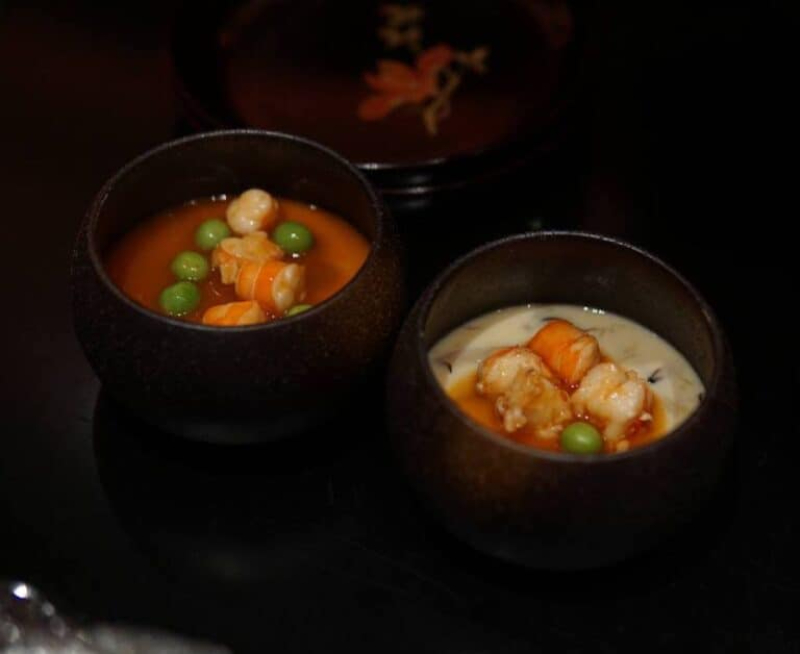 The sashimi course at any omakase restaurant in Singapore is probably the biggest indicator of a chef’s ingenuity with the best of the season, we were not disappointed at Kiyose.

Besides the required two types of tuna (akami and otoro) on the summer-themed plate, there are also soft and clean mirugai (geod clam), crisp hokkigai (surf clam) and ishidai (fish-beak striped) neatly rolled with oba leaf and plain bafun, which accentuates the succulent texture of the fish.

Served together, but in a separate dish, are seared isaki (chicken grunt), tasty thanks to the heat extraction of its savory fat, and shima aji (stripe jack), smoked with hay to give another dimension to its firm and elastic flesh. 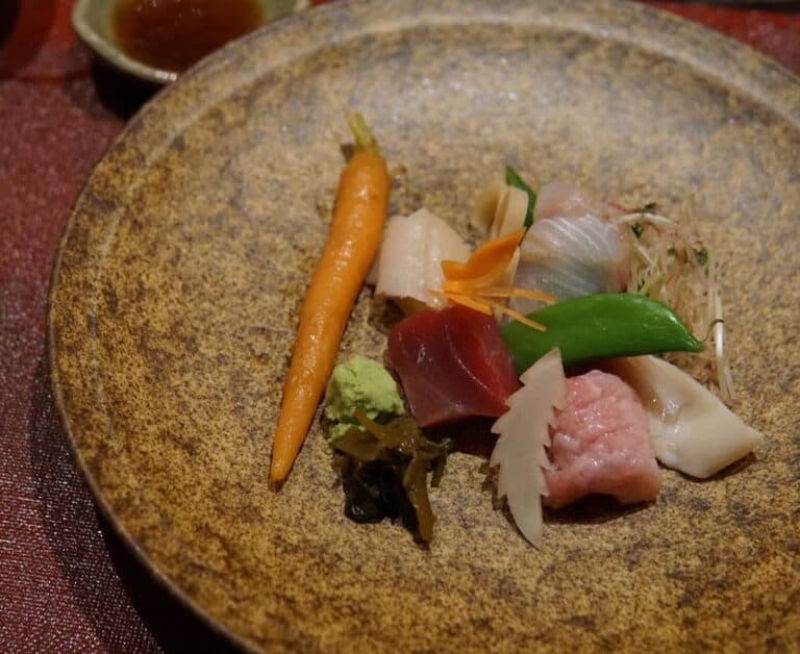 Little eaters might be happy that there are only two parts to the sushi course. The first is surprisingly, a fried mound of red vinegar rice and Sakura ebi sandwiched between seaweed for a wonderfully textured bite.

The next one is more predictable, but doesn’t make it any less flavorful – think a big negitoro maki rolled up with perilla leaves and pickles, then topped with creamy Hokkaido bafun uni silvers. 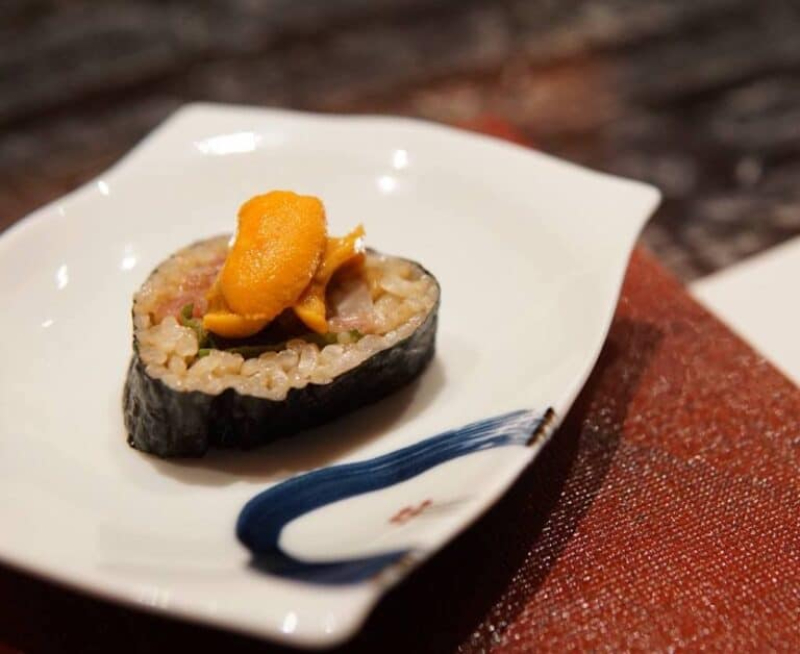 For the penultimate of our savory dishes, we get an A5 Kagoshima wagyu strip loin cooked in soy dashi, which is then layered in a bowl with Saitama yuba (tofu skin), fried eggplant (the Japanese nasu is also in season) and leeks. Undoubtedly a rich and satisfying dish that will help fill you up if you weren’t already. 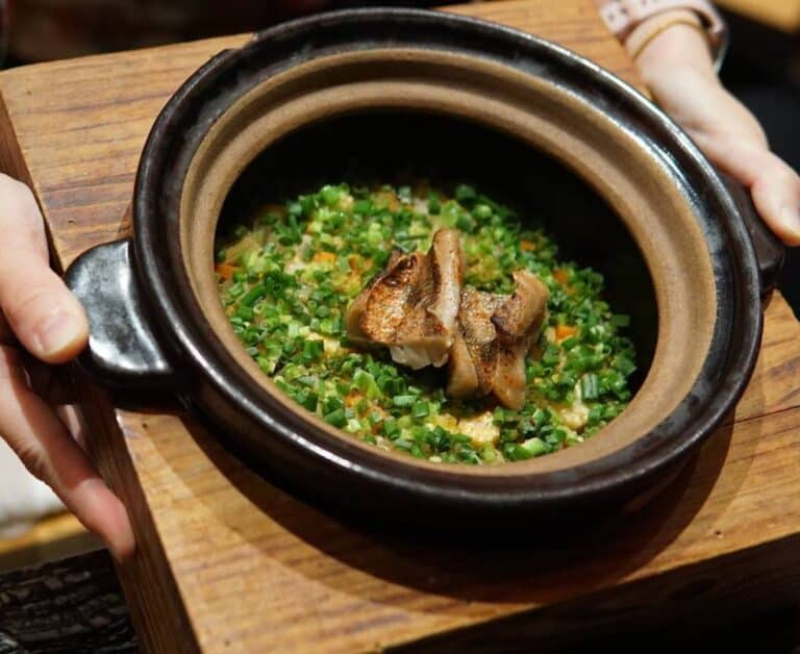 No Asian meal will leave you without carbs, and at Kiyose it was clay rice with plump and juicy kinmedai (splendid alfonsino, also known as golden snapper) that was blanched, then simmered in a liquid made from soybeans, dashi and sake.

There’s a bit of performativity here with the spraying of water on the rice lid; apparently in samurai times this was done when food was presented to royalty to check for signs of tampering. Tonjiru is served with claypot rice, a miso-based pork and vegetable soup spiced with gobo (burdock root) with sansho pepper.

Not being able to finish the rice in the clay pot is commonplace, and what we really liked was that the chefs prepared them as onigiri for diners to take home as a simple lunch for the day after. 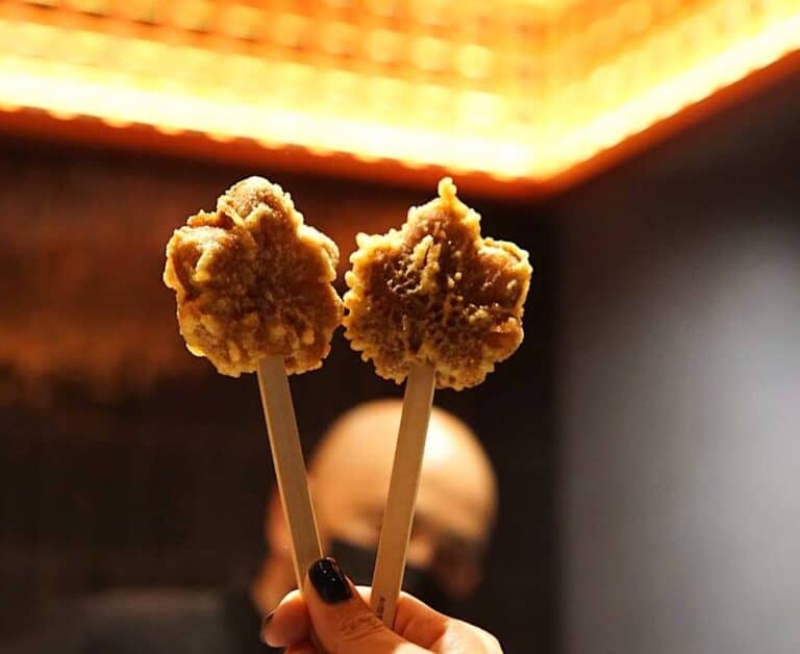 Although our bellies were about to burst, dessert was an added treat from Chef Shimpei. A friend from Japan had sent dorayaki (Japanese sponge cake flavored pancakes) with matcha and custard flavors.

He created a light batter for frying, resulting in a hot batter wrapping in extra gooey toppings for that one-of-a-kind finish, although Japanese fruit was also served!

ALSO READ: Restaurant review: Bloom in the spring with the Japanese concept of omakase Fukui