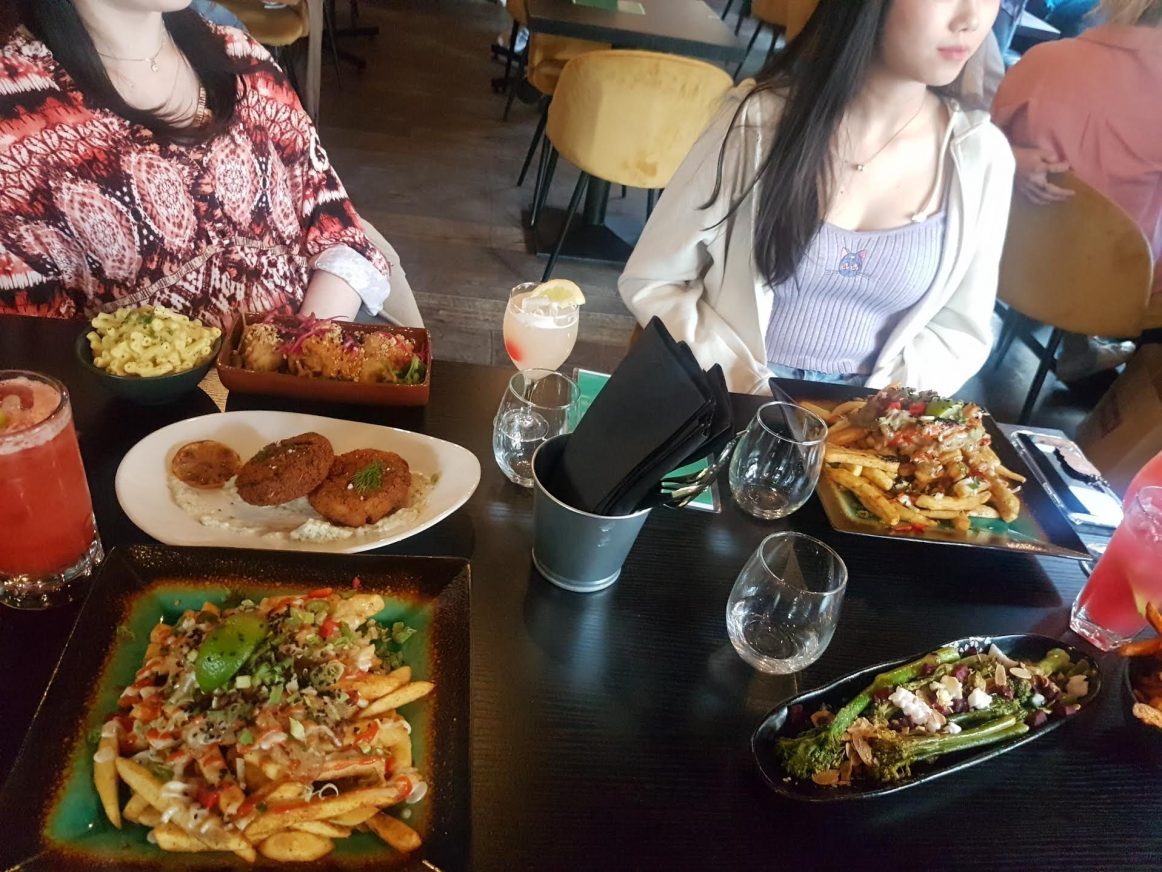 Jungle Bird is Birmingham’s newest venture into the vegan market: an all-vegan restaurant and bar.

Located right in the heart of the city, Jungle Bird is located right next to the Alexandra Theater, close enough to the city center to be connected and walkable to public transport, without being overwhelmed by drunken students and commuters.

Despite its downtown location, Jungle Bird can whisk you away to a tropical paradise with its Caribbean-style decor, island color scheme, and floral decor. Arguably, it was a somewhat unusual theme for a vegan restaurant, accompanied by random top songs such as “Stacy’s Mom”, “Toxic” by Britney Spears and “Rich Girl” by Gwen Stefani, but given the success of the restaurant, it’s safe to say that worked in favor of Jungle Bird.

The staff were incredibly accommodating and kind, with one of the servers chatting with us, after learning we hadn’t been before, and offered lots of recommendations. Despite the fact that it was peak time and the restaurant was packed, the service was excellent.

Unsurprisingly, cooking was the highlight of the evening. The food was reasonably priced and completely unexpected for a self-proclaimed carnivore. Every option, from cocktails to main courses to desserts, was vegan, giving me way too many choices instead of the usual vegan burger.

I ordered the ‘Kraken Kalamari’, a huge plate of imitation calamari with Bajan influenced fries, Aoki and spring onions. The vegan food can sometimes feel like a side dish, leaving you hungry, but as a big plate it was incredibly filling. I also shared the ‘Espresso Slice’, which was still a bit too rich for my taste.

They also had several interesting drinks, and we tried just about all of them, with rave reviews. My “Jungle Punch” was a mix of rum, vermouth, grenadine and lime in an aesthetic cup. Juice tasting and, perhaps most importantly to me, only £5 at happy hour (5-8pm). Jungle’s Bird’s main appeal for a carnivore is its unpretentiousness, with meals for vegans and non-vegans alike ‘Rock Lobster’, ‘Banana Blossom Bowl’ and ‘Kraken Kalamari’. The food wasn’t overtly vegan, the place was highly Instagrammable, and the Jungle Bird is great for fooling meat-loving friends, as well as vegans who want more than one option on a menu, if not an entire menu.

For more foodie content, check out these articles below:

A Spring Guide to Picnic Food