Restaurant Review: In Search of the New American Ideal: All Saints’ Day in Minneapolis 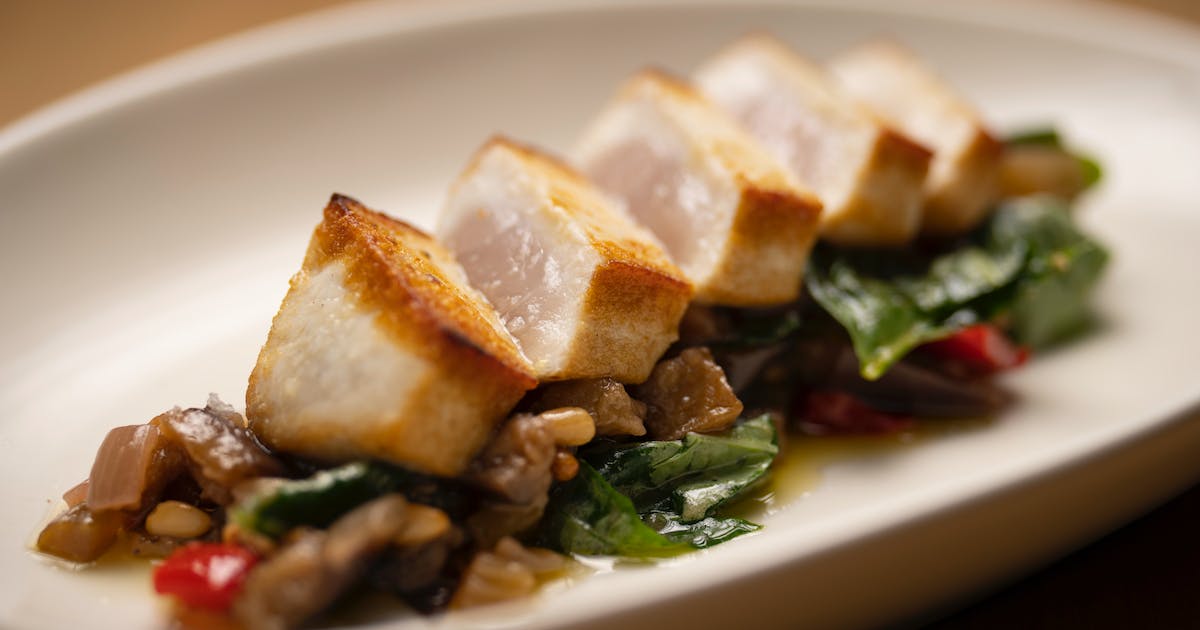 Restaurant Review: In Search of the New American Ideal: All Saints’ Day in Minneapolis

On the menu of nearly every high-end New American restaurant you’ll find crudo, a $25 half chicken, pasta, and bistro steak. Occasionally, a dry-aged band dares to make an appearance. Bread is rarely free.

There’s no shame in that – certainly not when executed well. Innovation is not always at stake.

All Saints, which opened last fall in the space that was most recently Bardo, serves all of these dishes. Some of them are good; some are almost there.

Case in point: crudo is hamachi, or yellow amberjack, and it sits on a pool of basil oil, under Fresno peppers cut like miniature rubber bands. Taken together, each bite is bright and colorful. And the chicken, brined overnight, cooked a la plancha then finished on the grill, is deliciously moist.

Dishes like these embrace the model majority – the one that All Saints emulates, to some extent. But many New American restaurants tend to lack character. Fortunately, All Saints Day has character.

Yes, it was once a funeral home (hence, to some extent, the name), but the past, like my phase as a skater, is history. What All Saints has created has the kind of charm that attracts casually dressed walk-ins as well as dinner dates.

For one, the patio retains the old-school feel that made its predecessor, the famed Bobino Wine Bar, so appealing — only it’s now bigger and more dining-friendly. On a recent visit, on a hot Thursday night, this patio was overflowing and noisy. Inside, the vibe is more buttoned up and modern: halo lights, white walls, clean tiles, and a long bar built with a thick, expensive marble slab. This is where you can sample the eight terrific cocktails concocted by Scott Weller, who last lent his gifts to the Parlour.

In a neo-bistro spirit, perhaps. More so, she refers to how the restaurant is filled with young customers until late in the evening. Although with poor acoustics, first dates could be difficult.

Nonetheless, co-owner Kim Tong is a frosty hospitality pro, and good (warm) service is second nature. She and chef/partner Dennis Leaf-Smith make All Saints their own, emerging from the tall shadows of Walker Art Center’s Esker Grove, where they met, along with other industry heavyweights, like Piccolo and 112 Eatery, where they each made their mark.

Aside from a few creative elements inspired by 112’s Isaac Becker and his protege Daniel del Prado, like a charred cucumber reminiscent of a similar dish at Martina’s, there’s almost nothing that calls to mind those restaurants.

In fact, acid, a signature flavor of Becker, is toned down at All Saints, in some cases to his detriment. This cucumber definitely needs it, because it’s otherwise bland. The endive salad – with watercress and long wedges of basil frittata – has more flavor, but I crave more bitterness and brightness. The swordfish, cut into pristine marble slabs cooked until a trace of pink remains, and served on a bed of eggplant caponata, is a revelation of a dish. But he also needs acid.

Sometimes the sauce is the culprit. A few dishes need more – the chicken could use more juice to enhance the flavor – while an otherwise juicy, well-brined pork chop, served with just a few onions and mustard greens, could benefit from a full-bodied boost.

And when the kitchen adds something extra, like an accessory, it doesn’t always feel right. Should the cipollini onions in this pork dish be this sweet? Is kumquat the right ingredient to add sweetness to an otherwise well-cooked striped bass? And is feta the right way to add more seasoning to chicken?

I am not sure.

Do not despair ; there are strengths. When the kitchen leans healthier to things like heat, big dishes, like cauliflower, frankly with barbecue spices and an assertive salsa macha, appear. While the salsa takes the nutty taste out of the cauliflower—perhaps it suits the chicken better—the plate is a delight to eat. Even better, grilled prawns with a sauce made with sweetened condensed milk, lime juice, lime leaves, Thai basil and a healthy amount of chillies.

Perhaps it’s the small plates where Leaf-Smith excels. The menu certainly devotes a lot of real estate to them — and for good reason: Grilled asparagus and a halved jammy egg are laid out on a creamy, mushy “ranchovy,” which has just enough funk to announce itself but won’t linger. not ; tiny granules of “crunchy” potatoes, golden and light, are a clever textural counterpoint; the side ribs, marinated according to the rules of the art and buried under a swarm of green onions, are flawless; just like the fried chicken, enhanced with harissa honey. My favorite, however, is the salt and pepper fried mushrooms, a patty of shiitake, maitake and oysters, carefully fried until crackling but not greasy. Eat one and try another dipped in the delicious Ginger Scallion Relish. Both will provide elemental enjoyment.

That’s not to say the four main courses aren’t worthy. Fish and chicken are good, but the other two have more to offer.

Mushroom bolognese, as earthy and deep as a meat stew, is the right match for homemade pappardelle that is as wide as bandages and softer than chewy. And the New York strip, while fat-free, is still tasty and comes with a bracing chermoula and fingerling potatoes, still crispy in the gravy.

Desserts, however, should only be ordered if you must. A fairly wobbly panna cotta has a nice citrus flavor, albeit slightly medicinal, but much of it comes from the syrup, not the cream itself. And a dry chocolate cake doesn’t seem any holier than a cake found in a grocery store.

Leaf-Smith and Tong call the menu “front vegetables,” and there are plenty of thoughtful dishes that back it up, but a theme is otherwise missing. Dishes criss-cross Korea, Southeast Asia, the Middle East, and Italy, then back to the United States.

But that’s the problem with good New American restaurants – they refuse to assign any character other than their own.

Beverage program: Bar connoisseur Scott Weller offers new takes on classics, with craft cocktails like a Bloodstone Negroni and Halleluhwah Highball ($11-$13). There are also more than a dozen wines by the glass ($8 to $15), half a dozen local beers on tap ($5 to $7), and zero-proof craft offerings (6 $).

What do the stars mean:

Jon Cheng is the Star Tribune’s food critic. Contact him at [email protected] or follow him on @intrepid_glutton.