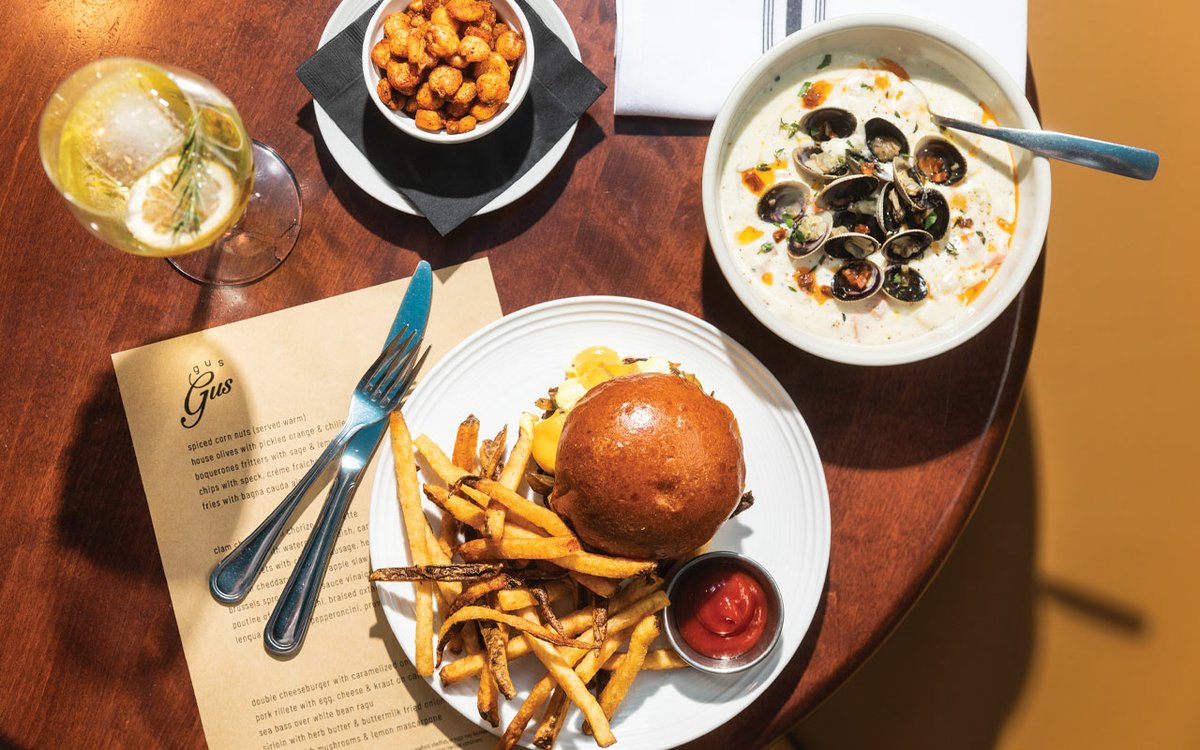 Blue fringed lampshades, stenciled azure ink walls with blue donkeys, a handful of chairs around a deeply carved corner bar, a shot of Jell-O gliding towards you, pushed by a woman with mischievous twinkles in her eyes – wait, don’t you, you respectable, shoot Jell-O in a basement in St. Paul? This is the essence of Gus Gus.

This shot of Jell-O is directed by Anna Morgan, owner of the restaurant, which opened on March 11, with her husband, chef Kevin Manley. These shots aren’t too sweet, beautifully citrusy bittersweet, done in an upscale style with sparkling wine, Aperol, Tattersall bitter orange, blood orange, and edible gold. They arrive cut in squares, trembling in gold paper.

“I have a weird obsession with Jell-O shots,” Morgan says. “I always made them for St. Patrick’s Day for Kevin’s big family. For them, St. Pat’s is like Christmas. We lived on West Seventh. We started at 9 a.m. with Irish coffees and six dozen shots of green Jell-O.

“Six dozen? I echo, talking to Morgan on the phone.

“I would give $20 cash to the restaurant’s petty cash, take home two plastic ramekin sleeves, the take-out ketchup kind. I make shots of green and red Jell-O at Christmas; I am obsessed. Nancy [St. Pierre, co-owner of 112 Eatery, Bar La Grassa, and Snack Bar] would laugh at me, but everyone here embraces them. Two ladies in their 80s the other night, they each drank two shots of Jell-O and shared a bottle of rosé. They were having so much fun. Another couple in the 80s, they had Jell-O injections. That’s how I want this place to be: the kind of place I would go on my day off and have a shot of Jell-O and everyone in the neighborhood feels like it is just the fun place where you are always welcome.

Well, it’s funny, but I sat down at a table at Gus Gus and plumbed the depths of the menu and found there was also serious fun. Clam chowder made with a mirepoix of vegetables cut into small blocks tough enough to put a smile on the grim face of a Michelin restaurant inspector. A salad of paper-thin root vegetables on tender mounds of gem lettuce brought together by a vinaigrette of macerated shallots and champagne vinegar, surprised by candied pistachios. Lengua sliders that take two days to cook and land on the palate like White Castle vapors launched like softballs from the sky. A cult burger, fries taken so seriously there’s a dedicated full-time potato cook, and the first major new take on Reuben’s West Seventh staple that I can remember from my living.

Learn about the latest development in restaurant culture in Minnesota as the generation of local talent that emerged in the kitchens of Isaac Becker marches east. We’ve seen it for a while: Chef Jason Hansen, formerly of 112, went on his own and opened Estelle in St. Paul. Chef Denny Leaf-Smith, formerly of 112, went out on his own and opened All Saints in Northeast. And now Morgan and Manley – two of 112’s top lieutenants and key talents in opening the Snack Bar – have painted a small basement house in inky azure tones and are inviting everyone over for burgers, salads, corn nuts and shots of Jell-O – albeit very well developed versions and elite restaurants of all.

Think corn nuts! Homemade, simmered and spiced, they have more history than you might imagine. They recount Manley’s first significant job at a restaurant, as a key sideman alongside Sameh Wadi at the much-missed Saffron. North African spices predominate, but they also taste like caraway and smoked paprika and have a bit of sweetness. They’re also a tribute to Manley’s childhood and an uncle who got up with him at dawn to make a creamed corn casserole from scratch on Thanksgiving, waking up in the dark, doing some redhead, smashing open beers in the morning. And if that’s not enough, corn nuts also go back to a garnish for a dish Manley made at 112.

To make these corn nuts, Manley soaks and simmers dried white hominy for a day, frys it, and spices it with a mix of about two dozen ingredients — that’s a long way to go for a little $4 snack. “Sameh always told me, ‘You have to create layers of flavor,'” Manley explains. “’It’s what gives you depth in different places. If you only add salt at the end, you only taste the final salt. I live by it. (Manley was alongside Wadi in their legendary iron boss fight – stick around until the end of the shift if you want to know what it was really like to face Chief Morimoto in a fish fight.)

Is that a lot of storytelling to bear for corn nuts? We do not care! Putting them in your mouth and perusing the cocktail list feels like you’re making the best kind of new friends, ones that are unassuming, interesting, and welcoming. Pass the corn nuts!

But at Gus Gus, there is also the most cutting-edge cuisine. The clam chowder is a spectacular version, a painstakingly constructed chowder served under half a dozen just-steamed littleneck clams, all drizzled with a spicy dark red chorizo ​​dressing, creating a lovely petal effect flowers on the snow. Better still, this dressing — made with spiced Spanish dried chorizo ​​sizzled in olive oil and splashed with red wine vinegar until the smoky, earthy, and spicy notes are released — gives the chowder dimension. and pop. It’s so pretty, it’s so tasty, it’s so new. Ditto for Spanish marinated boquerones, which are battered in tempura, deep-fried and served on an aioli tossed with candied lemons sprinkled with fried sage – it takes the concept of a traditional Italian antipasto of fried anchovies and sage and makes it fresh.

The crushed burger, which Manley developed with Jason Hansen of Estelle when the two ran that same kitchen in its latest iteration, like Stewart’s, is prodigious: a local Peterson chuck, flat-crushed in a crust of sizzling salt and pepper and served on a pink bun from Saint-Paul’s classic bakery, La Boulangerie Marguerite. Bite, and that’s it: gooey, meaty, sweet, rich.

The fries are even more amazing: pencil-long, brown like toast, rich and crispy. “I’m zero compromise with fries,” laughs Manley. “I want them as long as my hand. I start with a potato that’s maybe 18, 20 ounces. Pickle them for 24 hours. I have a full time potato cooker who only does chips and fries. My food reps are like, ‘You’re crazy.’ I’m like, ‘No. I’m Irish from St. Paul. Don’t talk to me about potatoes; I already know what I need to know. People will go crazy when they see my fries. They will never go anywhere else. »

It may be true.

So might the Gus Gus Pork Rillette Sandwich, a confit pork shoulder served over rye with sauerkraut and Thousand Island dressing, which of course takes you into Reuben territory. , but Manley then adds cheese and a gorgeous fried egg. It all turns into layers of golden flavor and richness with crisp acidity and more flavor and more richness, and you think, It’s what the chefs cook for themselves after the bar. I finally got lucky at this club.

“We struggled to make our elevator sales pitch for this place,” says Manley. “For Anna and me, our favorite thing in the world are the little neighborhood bars, like Sweeney’s. The Nook, everyone goes there once or twice a month. 112 also: Enter on a Thursday afternoon at 5 p.m., it’s a bunch of guys in Twins jerseys facing a couple all dressed up to celebrate their 50th anniversary. How do you explain that? You probably know Sweeney’s and 112, and how many people do it? »

The people doing it are probably St. Paul people, and Gus Gus is a very St. Paul place.

“We lived in St. Paul 11 ​​years together, and I was here for two years before that,” Morgan says. “We live 10 minutes away on Grand Avenue. I saw this t-shirt: ‘Date with Minneapolis. Marry St. Paul.’ We were doing.”

Those fringed lampshades? Morgan assembled them herself, then had their real electrician look at them. “He said they would work for a while,” Morgan says. “I said great. These are not restaurant lampshades; these are clearly home lampshades, and at least initially, I just want people to understand that they’re walking into our bohemian, funky, eclectic home. That deer mount? My dad shot it when I was a kid. I took the pictures off the wall. We have spritzes on the menu because that’s our thing when we travel: It’s spritz time. It may be a millennial thing, or a post-COVID thing, but I feel so strongly: Be yourself. Don’t try to be someone else and stretch and stress yourself out to the point of exhaustion. So it’s us. Absolutely us.

Is St. Paul ready for fun new neighbors who can cook like they’re at 112 and party like they’re at Sweeney’s? I’m pretty sure St. Paul was born ready, but we’ll see what happens when the rest of the underground tries to enter the house.