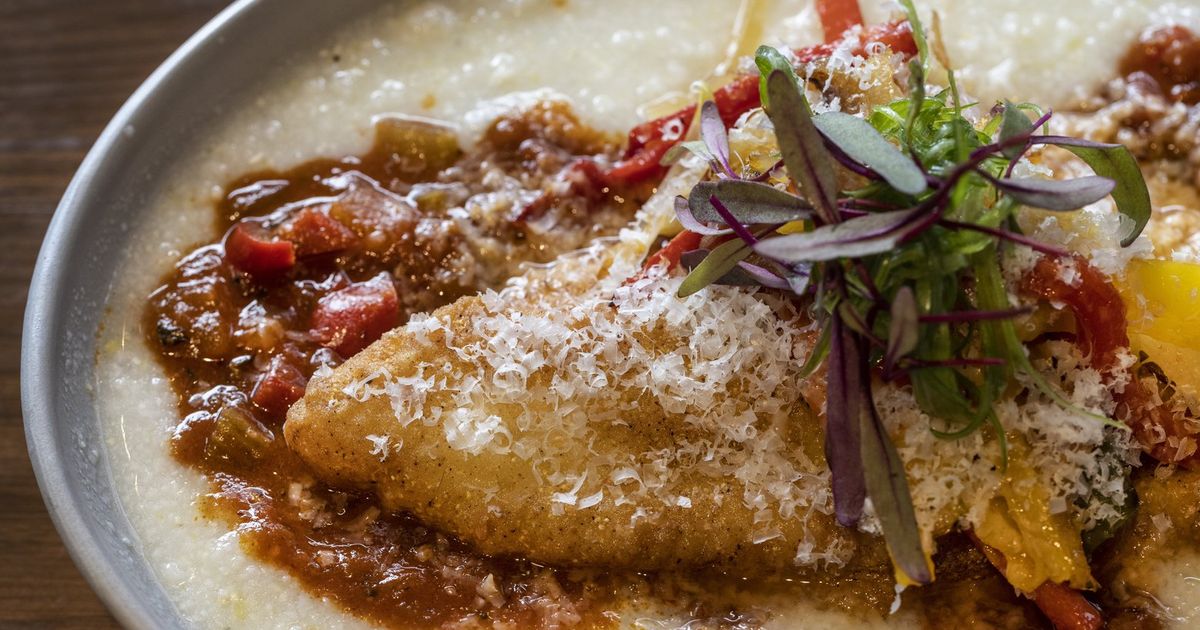 COMMUNION RESTAURANT & BAR – or Communion R&B, as chef and owner Kristi Brown puts it – is an amazing place. It exists at the intersection of past and future, located off 23rd Avenue on East Union in Seattle’s Central District, in the new Liberty Bank Building on the site of the first black-owned bank in the Northeast. western Pacific. Brown has worked to educate those unfamiliar with the redlining and then gentrification that pushed many black residents out of the historically black neighborhood. “We’re taking a stand…” she says, “making sure people understand what this area represents.”

Brown’s own family history weaves the CD together with Kansas City, and she intentionally brings it all together with Seattle’s diverse cultures, both on her menu and in Communion’s bustling dining room. Its philosophy opposes any concept of a prefabricated high-end restaurant, sometimes taking the form of poetry: the floor just inside the door of Communion spells out “I A M AT HOME”, while the chalkboard nearby might say “Love is a thing to do!!!” with hearts as dots on the I’s. One evening, the bartender’s shirt reads “LOVE IS DOPE”. Although taking a stand is part of the journey, the destination of Communion is right there in its name.

Brown calls the Communion kitchen the “vehicle,” and it’s a go-anywhere vehicle. In the short time since she forged with her son Damon Bomar to open during a pandemic, Communion R&B has been named one of the 12 best new restaurants on the planet by Condé Nast Traveler. It was selected as one of the 50 nationwide favorites for The New York Times’ “The Restaurant List”. And it earned Brown a James Beard Awards semi-final nomination. But she’s been cooking since 1993, including at Seattle’s beloved Kingfish Cafe (where she created her famous black-eyed pea hummus) and decades of dining, as well as community service. Communion is not, she will be the first to tell you, the kind of recognition that comes from lists or prizes.

WITH ALL IT IS getting into it, past and present – and with all that’s planned, in terms of the future – Communion, in reality, looks like the best party in town. Music — like A Tribe Called Quest, slow jams, contemporary hip-hop or vintage jazz — plays nice and loud, while Sunday brunch can bring gospel to a volume that’s sure to get everyone up and running.

The place is packed with a crowd that includes multi-generational families as well as date nights (or morning afters) and gatherings of friends, spanning a representation of different races not often seen in Seattle. (Surprisingly, it’s not the old ones who complain about the volume; more “people in the middle” Brown says.) Peals of laughter come from the parties mingling at the big communal table. At the local bar, discussions could range from how much people love banana pudding (got it!), to finding out that the person sitting next to you also went to nearby Garfield High (go Bulldogs!), and that she knows Brown from both their sons are also going there.

What’s on these plates transports you. Brown calls her kitchen “Seattle Soul,” and it’s a fabulous party. His po’boy-meets-banh-mi catfish resemble versions found around New Orleans, like these paying homage to local Vietnamese cuisine with pickled daikon and carrots, while Communion’s jalapeños are grilled, the homemade pâté. That same catfish, crusty cornmeal crust and luxuriously chewy inside, also centers the catfish and grits – that last taste of sweet cream with parmesan cheese low in the mix, and a creole sauce with classic spicy shrimp brings it all together, with tricolor bell peppers and shallot twists for a nice presentation. The sauce, says Brown, is pure Paul Prudhomme; she’s “a big fan” (witness the well-worn cookbook on the shelves near the host’s booth, which she’ll happily tell you she slipped long ago from a favorite instructor at Seattle’s culinary program Central).

female dogs love brunch with Chef Kristi Brown, Sunday, May 8, at 101: “An experience where the food is delicious, where sex is not taboo, where nurturing a healthy relationship with your body and soul is normal, and where ‘we feel supported, loved and complete. Information and tickets at chefkristibrown.com/bitcheslovebrunch.

Brown tops a suite of deviled eggs with tobiko, onion jam and smoked oysters, each wonderful iteration in its own way. Praise the egg whites to heaven – they’ve never been cooked so perfectly set but still soft, anti-rubbery. The thick, creamy yolk blend gets Dijon instead of dry mustard, and yes, there’s cayenne pepper, but that’s just part of the proprietary seasoning blend she calls Sez’.

“I have to start selling it soon…” says Brown. “It’s like 16 different spices – it’s like hellish stuff in this thing.”

Brown’s exemplary grilled half-chicken, the soft, full-flavoured bird, gets a bright, nuanced, brick-red Berber sauce that boosts the heat, with this Ethiopian spice blend sourced from Sebhat Bakery & Grocery in the South End. His “PTL Wings,” coated in a spicy, fruity-sweet chili sauce, are a “homage to Thompson’s point of view!” extremely newsworthy. the majestic and essential classic of Central District soul food.

Please don’t be mad if you can’t find some of this when you go to Communion. Brown is working on a new menu as we speak, with only a few dishes planned to be made. (Regarding the corn chowder: “It might make a comeback.” Yesssss.) Thought, however, will have continuity, as will the heart.

“We love the Lao sausage we use,” Brown says, and she also loves supporting small businesses in Seattle, “so we have to keep it.”

She talks tantalizingly about testing the sausage in a take on the marvel that is the Scotch egg. And speaking of support, desserts will continue to be mostly outsourced to other women of color, with the famous banana pudding coming from The Sugah Shack; coconut cream pie and more from Black Magic Sweets; and Kryse Ice.

“I wanted to give them the opportunity to shine…” says Brown, “to help build where they are.”

Bomar leads Communion’s cocktail program and some of the concoctions it looks like they could get messy, but a balance between starting (and continuing) the party is struck. The Cherie Amour keeps its promise of a piece of mezcal on a Hemingway daiquiri without too much smoke; it’s beautifully apricot-colored and nicely tart with a homemade grapefruit bush, topped with cherry and lime. Larger-format pre-bottled options include the refreshing Purple(ish) Drank, a rum and hibiscus-guava tea punch that’s pleasantly floral but not overly sweet, deeply drinkable and probably better shared.

IN THE MIDDLE OF EVERYTHING, don’t miss the wall which is a collage of vintage black and white photos: dignified figures standing still in the late 1800s, smiling portraits of the next century, various happy couples, women in dresses, men in hats. Brown says she is the custodian of the family photos passed down; she doesn’t know all of the people depicted here, but they’re all related to her in some way, collected over time.

Everyone depicted is black, but, she says, “I’ve had different people from all walks of life say, ‘Hey, that looks like my dot-dot-dot. So much of it” – from communing to Communion – “is that we are more alike than different…if you can peek into each other’s cultures, you will see that. Brown talks about the lack of diversity in representations of culture in general.

“What we can do to dismantle this,” she says, “is show ourselves and show ourselves, and then people will have no choice but to start questioning what they’ve always had. knew.”

Along this same wall, an antique marble side table stands like a still life. It contains five framed photographs, five funeral service orders, a silver bell, a magnificent bouquet. Yes, says Brown, it’s an altar, one for immediate family, “to honor their presence… If it wasn’t for them, I wouldn’t be here. So I really want to acknowledge their support for me to get here and continue to be here. And I feel like I’m very protected in many ways because of them. This too is Communion. Respect.

“We’re in a good position,” Brown says, “to be able to tell an old story and a new one at the same time…

“I really feel like we’re setting a new standard…” she says. “I want to be that booth for the community – the booth of resilience, the booth of joy.”

What do the dollar signs mean

Average price of a dinner dish:

206-464-2050 or [email protected]; on Twitter: @BJeanClement. On Facebook: facebook.com/bethany.jean.clement; and on Instagram @bethanyjeanclement. Bethany Jean Clement has been writing about food, restaurants, and the people and cultures intrinsic to them for The Seattle Times since 2014.