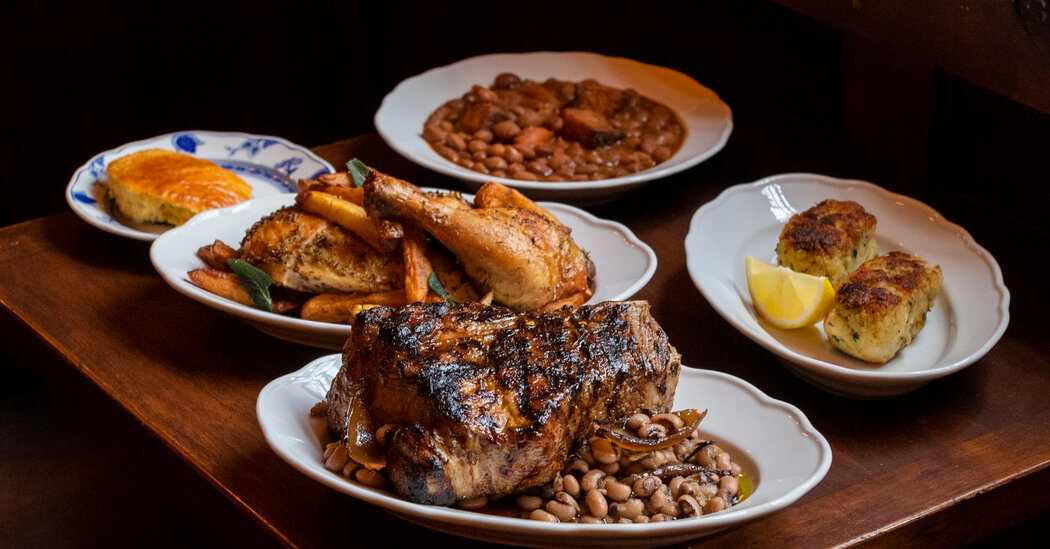 An entrepreneur launching an Eritrean, Tibetan, or Surinamese restaurant in New York can, by locating in the right neighborhood, have a built-in following of people who grew up with the food and who will likely give it at least a whirl. Not so for anyone setting up a Shaker-inspired restaurant, like Jody Williams and Rita Sodi did on Commerce Street in the West Village.

While the two have never struggled to draw crowds, their three-month-old restaurant, Commerce Inn, will have to make do without major support from members of the Shaker faith. At last count, there were three, all living at Sabbathday Lake Shaker Village in Gloucester, Maine. By all accounts, they rarely, if ever, venture into Manhattan to check out the latest hotspots.

On the plus side, Ms Williams and Ms Sodi probably don’t have to worry about angry Shakers harassing them on social media to tell them they’re doing everything wrong.

The long twisted space they’ve taken over, located at the right angle Commerce takes just past the Cherry Lane Theater, seems to keep going further back in time with each incarnation. Before the 1990s, it was the Blue Mill Tavern, a local hangout with Portuguese and American food and a dining room that seemed untouched since the place opened in 1941. When it reopened in the early 1990s as Grange Hall, it looked several decades older, with an Art Deco motif that lasted, in one form or another, through subsequent changes in name and style. property.

Now the interior has reverted to an earlier century of Americana. This could be a setting for “The Crucible”. There are small, narrow single-seat benches in the bar, known in Commerce Inn parlance as the Tavern. The dining area has tapered back chairs, a wraparound deacon bench and peg rails for hanging coats. This furniture, built for the restaurant in the raw Shaker style, is more comfortable than its penitential aspect suggests.

However, the dining room is not a place that invites you to linger for hours, as you do at La Buvette (the maze of Francophile built by Mrs. Williams) and Via Carota (the trattoria dotted with antiques that she imagined with Mrs. Sodi) . Candles burn in the windows of the tavern but not in the dining room, where flickering shadows might help dispel Protestant severity.

But nothing about Commerce Inn was designed for romantic evenings or, for that matter, professional Tinder checks. If that had been the idea, I doubt the short menu would be set in a font I last saw in Colonial Williamsburg, or that right in the center of that menu would be, on a line of its own, a family-sized portion of baked beans.

OK, the restaurant calls them shaker beans. And they’re probably the best baked beans you’ll find in New York. They’re soft but don’t fall apart, they’re high in liquefied pork belly fat, and they simmer in enough molasses to give them a bitter, coffee-like sweetness, but not so much that they taste like a dessert.

Yet when you eat them, you may recall that Shakers abstained from sex and marriage, and that Shaker men and women ate their meals at separate, elegantly constructed tables before retiring to separate areas. separate and sparsely furnished sleeping quarters.

Only beans are specifically identified as Shaker. Ms. Williams and Ms. Sodi must have studied Shaker and non-Shaker cookbooks to come up with items like raw oysters dressed in sweet onion brine for bread-and-butter pickles; spoon bread, half pudding and half cake, served in a large oval baking dish; and glazed slivered leeks swirled with cream and grated horseradish.

What we’re really talking about here is pre-depression northeastern farmhouse cooking which descended, like Shakerism itself, from England, but which has been drastically modified because which, after all , wants to eat some of this stuff these days? There is definitely less cream than cooked Great Grandma Wells. And I imagine she would have glanced at the crispy, bright green Brussels sprouts that Commerce Inn covers in warm bacon dressing and wondered why they had been removed from the heat before they had had the chance to turn grey. When you taste them, you will know.

But she would have been reassured by the meats, which were very dark and, with the exception of a tough, badly cut veal chop, very good. The only one permanently on the menu is roast chicken, rubbed with herbs and interspersed on the plate with thick fried potatoes that become wonderfully soggy with the chicken jus.

The rest are written every day on chalkboards hung under the peg rails, with prices usually in the 30s. Seems high until you see the size of the trays. If you’re lucky, you might find several slow-roasted pork buns seasoned with thyme and served with large chunks of honey-colored skin for you to chew, slowly and appreciatively. Or a slice of marinated beef tongue, boiled until tender then seared in cast iron until browned like meatloaf. The patiently roasted veal brisket offered recently gave the rare taste of a cut that has all but disappeared from American tables.

Although the restaurant has been in operation since December, it looks like it’s still edging its way into flavors that in many cases have to be inferred from the cookbooks. When I return to the Commerce Inn, it will be because I am curious about how spring and summer vegetables are incorporated into the menu alongside these main courses.

I’m less likely to return for the regular brief menu, which has an inordinate number of disappointments. The chowder needed more potatoes and lobster meat that hadn’t been overcooked. The so called rarebit was more like frozen melted cheddar cheese on toast. And while the cod patties were very chewy, they didn’t contain much cod. A serving of two cakes is $25 – an expensive way to eat fish-flavored mashed potatoes. I’d stick with the browned butter and thyme sautéed fluke instead, with a side of baby potatoes that seem out of place but are so good no one is likely to complain.

If ginger cake and pear and date pudding are offered, skip it. Both are so close to their English origins that they would probably drive on the left side of the road. They looked way too dense and rich after all that meat. Of course, they turned out to be exactly what I and everyone at the table wanted.