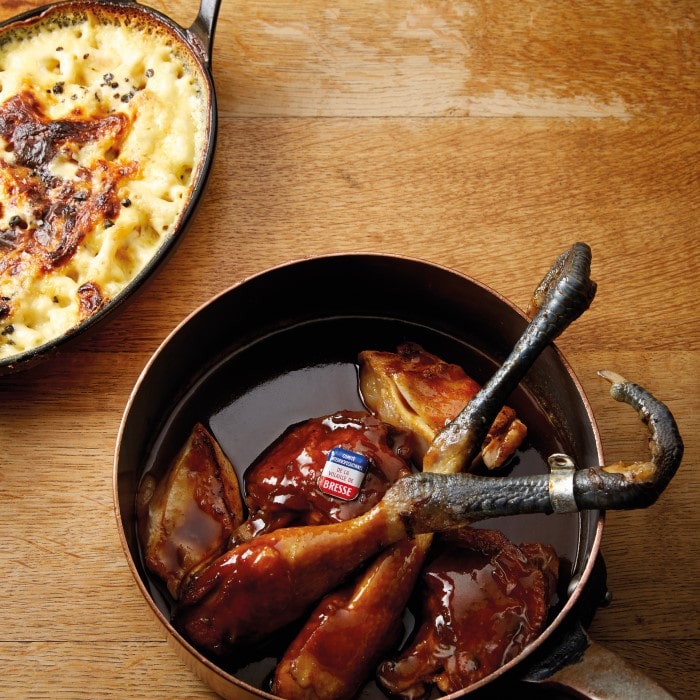 Since I went there over 30 years ago, I love Aux Lyonnais. It opened its doors in 1890 between the Opéra Comique and La Bourse (the former French stock exchange) in the heart of Paris. Lace veneers lined the front windows and heavy velvet curtains hugged the door; the legs were covered in polychrome cement tiles, while the walls were adorned with mirrors surrounded by wooden moldings and the white wainscoting in subway tiles was topped with beautiful Art Nouveau floral borders. At noon around this time, it was a sea of ​​gray suits as brokers and bankers who worked nearby gathered to dine in the high-ceilinged space. That’s why I liked him better at dinner.

The pretty waitresses in black dresses with white aprons could take their time in the evenings which meant they pampered you as best they could. If you couldn’t decide which dessert to have, they would bring both. Empty wine bottle? Like mind readers, they moved a semi-finished one left on a nearby table to mine without so much as a raised eyebrow. And the food was delicious too, including Salad with bacon – a pale green stubble tangled with curly endive dressed in a shallot wine vinaigrette, a cocotte egg and pieces of bacon; dumplings with skewers (pike-perch dumplings baked in the oven); and a jaw-dropping chicken with crawfish sauce. The wine – Coteaux du Lyonnais, if my memory isn’t too dusty – was cheap and easy to throw away, and the place resonated with such good times and good food that it was the perfect antidote to a really bad daytime.

This part of Paris, however, suffered a serious shock with the arrival of the electronic stock market, and the last living market left the Palais Brongniart, known as La Bourse, in 2004. The exodus of brokers, and the advent of lunch in sandwich at your office, further diminished the clientele of Aux Lyonnais, which was in danger of closing when it was bought by multi-starred chef Alain Ducasse in 2004. Ducasse refurbished it and perpetuated it as one essential Parisian showcases of traditional Lyonnaise cuisine, almost also a tribute to the late Paul Bocuse who said of his hometown “Lyon makes you hungry”.

Now, with the arrival of a new chef, the very talented Marie-Victorine Manoa, originally from Lyon, the cuisine here is better than ever. Dining with a friend from Leeds on a cold November night, we each found solace in different ways. For her, it was a rich, deeply flavored chicken soup with vermicelli and diced vegetables, and for me, Eggs In Meurette, technically a Burgundian classic, but the precise geography at the table was less important to me that evening than the perfectly pampered egg that arrived in a reddish, wine-rich pool of chocolate sauce, dense with chanterelle mushrooms and chunks of bacon. Then, Lyon comfort food grand slam for both of us – doormat apples (crispy fried grated potato cake, Lyon specialty) garnished with a mixture of wild mushrooms and yellow wine zabaigone for her, and roasted Mangalica pork with white beans, spinach and plum compote for me.

Although decidedly greedy, we shared a Saint-Marcellin cheese from La Mère Richard, famous cheese factory at the Halles Paul Bocuse in Lyon, because when you can eat a perfectly aged example of this cow’s milk from the city of Dauphiné from which it takes its name, you do it. Likewise, no one in their right mind would pass over roasted plums with brandy, Bugnes (small sweet donuts) and lemon and fennel sorbet. It was a deeply satisfying meal, and with this excellent new chef in the kitchen, it’s gratifying to know that this fine Parisian institution is in such good hands.