Restaurant review: All Saints Day is a master class 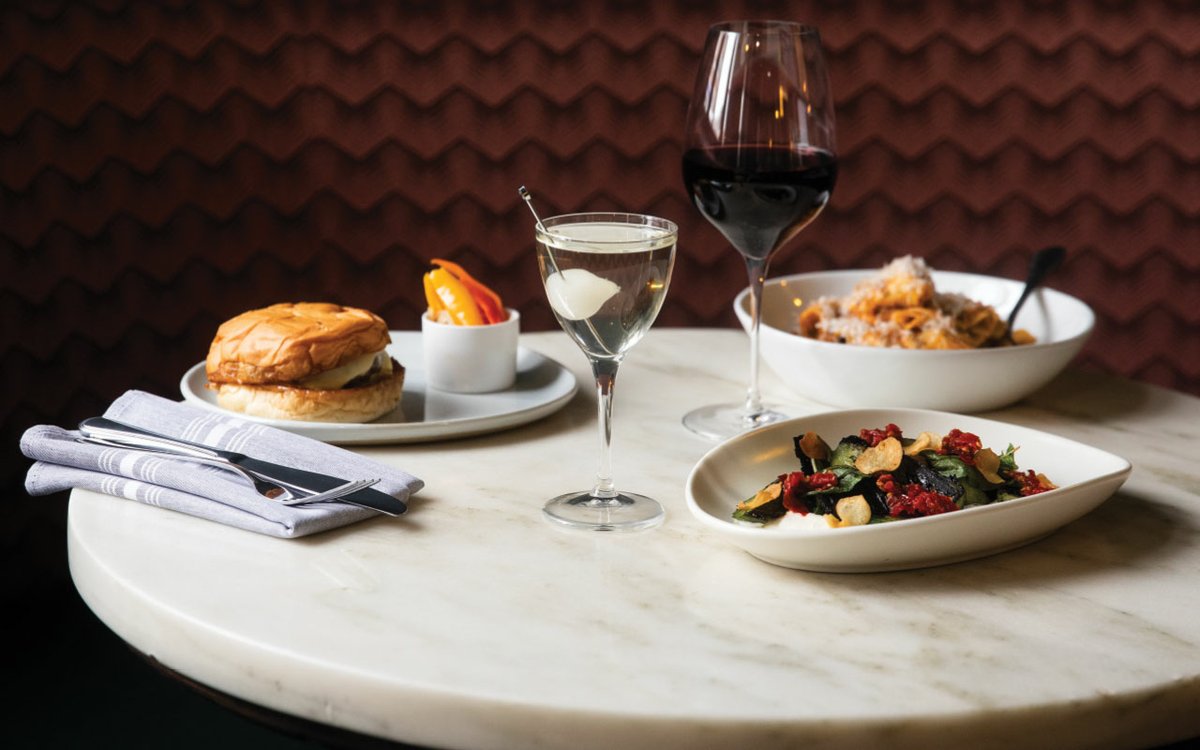 Restaurant review: All Saints Day is a master class

I thought a lot about masterpieces lately, not in the sense of super-good artwork, but in the original sense of the word. Masterpieces were once objects submitted by an apprentice to a guild of master craftsmen, who then used that piece to judge whether the maker had mastered his craft well enough to enter the guild. Thus, a watchmaker can be apprenticed for a period of time and then make a clock that shows mastery of a variety of skills, and that masterpiece would allow the individual to join the guild and possibly set up a shop. Similar learning paths and masterwork standards existed for bakers, brewers, cheesemakers, and other food artisans. I think we might be happier today if this artisanal sense of the word masterpiece had persisted, instead of the meaning we use today, which is something like, Here is an object of unattainable value – admire it and pay more!

I bring this up because I want to say that the new All Saints in Northeast is a land of masterpieces, except I don’t want you to take this in a colloquial 21st century sense. I say it in this old fashioned way: Take a look at All Saints and you’ll see plenty of seasoned craftsmen who really know how to turn the gears and ring with joy.

What kind of joy? Well, here’s one: Fried mushrooms, fried mushrooms! Pieces of oyster mushrooms, shiitake and maitake mushrooms dusted with seasoned cornstarch, quickly fried so they are as crispy and tender as calamari, and served with a thick dip of hand-cut green onions, seeds sesame, fresh ginger and a little oil and vinegar. They’re everything a fancy restaurant snack bar should be: surprising, light, conversation-engaging (are they more like cheese curds, calamari or Japanese chicken karaage?). They’re also likable, shareable, and interesting, and they require more catering know-how than most people could ever pull off at home. Dip a piece in scallion dip and put it in your mouth for a little trip: the thick, bright garden liveliness of green onion, the sharp salty edge of paper-thin fried dough, the flesh fresh mushroom – it makes you feel alive.

Pair this delicious bite with a sip of your cocktail, perhaps the non-alcoholic Rose (pronounced “Rosie”), a carbonated wonder that arrives in a tall champagne flute and has a scent of hibiscus, which is paired well with a tart grapefruit core, creating something a bit like a Lambrusco, but unique. Or maybe your drink is a chef’s, double-onion Gibson, made with vermouth rested on charred scallions, then served with a fat ghost of balsamic-marinated white onion, picked on a clear toothpick. . Fun!

All Saints opened at the end of September 2021, and the feeling of Fun! was the main thing that came to mind as I surveyed the room on the busy nights I visited. The crowds were buzzing – the new open room layout made sense, with a long bar between the main dining room and the huge patio – in this dining space, one of the holiest and most famous in the north- is, formerly Bobino. The adult hipster playlist (Duran Duran and Joy Division) echoed throughout as fun treats cascaded from the kitchen and bar as reliably as a jet of water from a waterfall. Homemade pappardelle two fingers wide, tender enough to split with the pressure of the side of a fork. Seared hothouse cucumber chunks black on one cut side, tangy with lemon juice, herbed with fresh basil leaves, bubbly with bright and creamy chili rings, and sultry with ricotta. Each cocktail had something surprising: ume plum in the Japanese whiskey highball, fresh ginger and carrot in a non-alcoholic highball.

Listening to the laughter, I kept thinking, Fun, fun, so much fun! And suddenly I remembered that pleasure is not always accidental. At Disneyland or watching a Broadway show, fun is what you get when high performing professionals work at the peak of their abilities.

Meet the professionals! The masters of All Saints are co-owners Kim Tong, general manager, and Dennis Leaf-Smith, chef. Tong has a fascinating biography. She is the youngest daughter of a father born in 1929 in French Indochina where he was exposed to French culture. A career soldier who was in the South Vietnamese army, he eventually fled to Minnesota after the war and later encouraged his daughter to study French. This led her to work and study in France and inspired a lasting love of French wine. Tong’s wine list is a little more French than anything else, but above all shows the work of a good editor who has carved out the riches available in a list of around fifteen products. “When I go out, I don’t want to work too hard, so that’s what I try to do for the guests,” she says. I particularly appreciate the pairing of visionary, environmentally friendly wines, like the Gotham Project rosé on tap, as well as large, historically significant European estates. For example, the restaurant offers wine from Aigner, an Austrian winery that has been around since 1773.

Tong was part of the founding team of Town Talk Diner, which started the local cocktail culture. She’s become a key figure at more iconic restaurants than we have room for, including chef Doug Flicker’s Piccolo and Esker Grove. There, she was still a cheerful force, with a twinkle in her eye, greeting people in Minneapolis restaurants by name and doing what the best general managers do: going from host stand to table, always everywhere, imperceptibly solving problems and fixing things.

At Esker Grove, Tong also befriended Dennis Leaf-Smith, one of those low-key chefs who shunned the spotlight but was a mainstay on the scene nonetheless. As a working-class kid from Minnetonka, Leaf-Smith spent his high school years jumping from the infield, where he played shortstop, to help his father in the family food truck. “It was an old-school food truck — popcorn and ice cream at high school ball games — not today’s food truck,” he explains. He went to Snuffy’s Malt Shop, where he learned to track 30 burgers on a plate, then to Café Lurcat, where he imagines having made at least 10,000 of his famous butter-scallion burgers, then for eight years became a support key for his mentor, Isaac Becker, as chef at 112 Eatery.

All Saints is Leaf-Smith’s first chance to bring his own interests as a chef to the public square, and his creations are a delight. His palate veers towards dark, smoky, sour and woody flavors – tahini plays an important role paired with avocado and grilled broccolini; batter-thick sesame seeds are layered over gem lettuce leaves for a buttery avocado salad that tastes absolutely new. His cheeseburger, Peterson Craftsman Meats patted and grilled flat to come out fat and thick, is clearly the work of someone who has looked into the souls of 112, Lurcat and Snuffy’s and understands two important things: how a burger can be a mortgage loan and how such a mixture of meat and comfort can act as a magnet on a metropolitan scale. This cheeseburger, topped with homemade pickled peppers and a mustard mayonnaise, is served on an old-fashioned bun from Grandma’s, the White Bear Lake bakery that powers so many old-fashioned local restaurants. I predict that once the huge All Saints patio launches for the summer, these cheeseburgers will become famous. Just like mushrooms and cocktails from bartender Scott Weller.

Weller was most recently at Sooki and Mimi’s, after years behind the bar in Parlor. I was particularly blown away by his zero-proof cocktails, which suddenly made me realize what most mocktails lack, namely focus and a sense of eventfulness. A lemonade, which I have now tasted, is a very different thing from a gin and tonic type creation with champagne vinegar, cinchona and juniper and all the rare elements that bartenders use. They are wonderful as an option when you want to hang around a little longer while others have a third cocktail but you don’t want a third cocktail yourself. It’s exactly what you expect from the masters of hospitality: the restaurant earns a few extra dollars and the customer enjoys their evening a little more with rare treats.

Tong, of course, attributes All Saints’ current success to customers. “This part of the northeast has received thousands more homes over the past five years, and we wanted to be that cornerstone as accessible and accessible as possible, where people could come for any occasion. It’s been so long since people have been able to get together, and we all appreciate them so much.

Leaf-Smith credits his mentors. “Isaac Becker taught me that consistency is key. Be organized, be flexible, be reliable. Prepare the dish the guest likes exactly the same way they liked it the last time, all 10,000 times following.

The clever words of craftsmen, as if addressed to a guild of judges? If we ever want to have a national conversation about how to change the way we use the word masterpieceI humbly propose to do it on All Saints mushrooms.