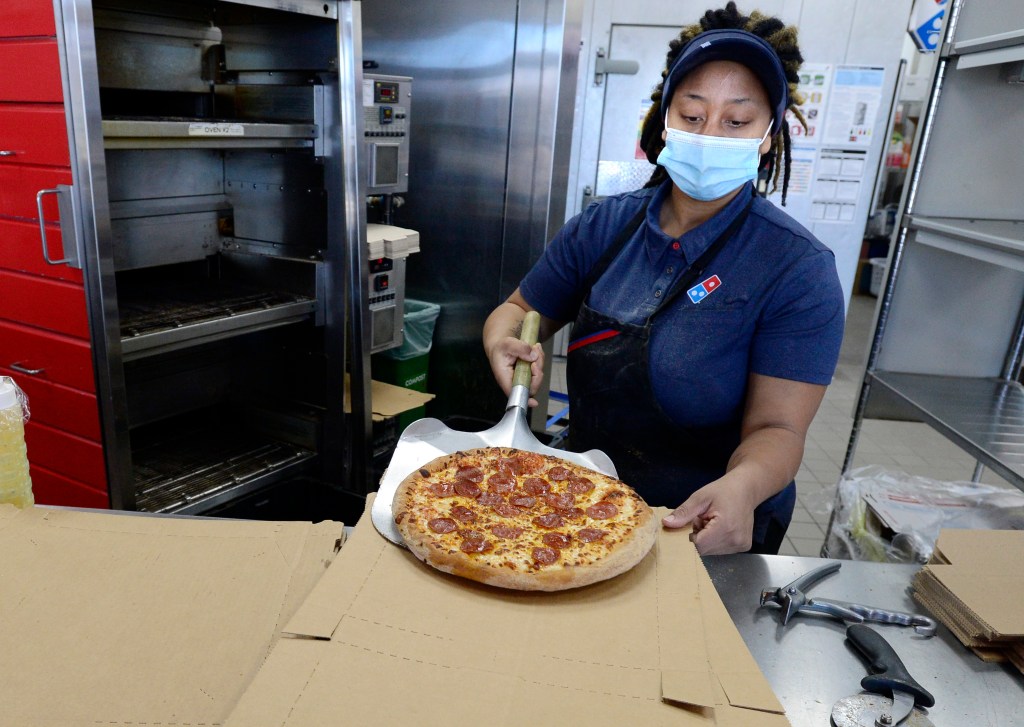 When a Gunbarrel Restaurant employee heard of a Boulder nonprofit’s need for a hot lunch to feed the homeless, she approached to fill their plates.

Domino’s assistant general manager, Amanee Howard, paid $301 out of her own pocket and baked and boxed about 25 pizzas that would feed the homeless at a Feet Forward lunch on Tuesday.

The act of kindness came after Shawn Camden, founder of Sancho’s Mexican restaurant, discovered on Monday that staffing and supply shortages would prevent the business from providing its regular “Taco Tuesday” at Feet Forward – a meal that the restaurant offers once a month since January. from last year.

Hoping to find an alternative, Camden called Domino’s Pizza, two doors down from Sancho, on Monday. He explained what the pizzas were for and asked if the restaurant could offer a discount. When Howard heard why Camden was calling, she immediately agreed to help with the order the next day.

Howard initially told Camden she would cover half the bill, but she later changed her mind and decided to cover the full cost.

“The way he explained it, I could hear the care in his voice,” Howard said. “It never occurred to me not to help.”

When Camden showed up to pick up the pizzas Tuesday from the restaurant, at 6545 Gunpark Drive, he said he was “blown away” that Howard had paid for the whole lunch.

“I mean I was kind of in shock,” Camden said. “Nobody would do that. Most people wouldn’t offer this, especially an employee. Most employees in this industry do not earn a lot of money. Everyone is fighting right now. For her, doing this is remarkable.

Howard now has a home in Denver, but when she first moved to Colorado from Las Vegas in 2018, she struggled with homelessness for about a year. She alternated between living in a tent and in hotel rooms in Denver, while working 20-hour days at two full-time restaurants to save for housing.

Howard said she was often treated poorly as a homeless person, so a single act of kindness, like having a hot meal, was meaningful.

“I’ve had people throw things at me, tell me to kill myself because I’m worthless because I’m homeless,” Howard said. “I had to continually pick up and move.”

Howard wants people to take the time to get to know the individual facing homelessness “and not be so quick to judge”.

The day Howard made the pizzas for lunch, temperatures in Boulder plunged into the 20s. The cold weather was also accompanied by snowfall.

“Cold weather hot food really goes the extra mile,” said Jennifer Livovich, founder and executive director of Feet Forward. “It was snowing that day and people were generally getting sack lunches across the board, due to covid.”

“(Amanee) really saved the day, which she did,” Livovich said. “Everyone who attends our events is always grateful and thankful for what we do and the food we bring.”

“For those who’ve been there, done that, there’s a sense of empathy and connection that makes you want to give back,” Livovich said.

As part of Feet Forward, Livovich does homeless outreach every Tuesday, which includes a hot meal at the Boulder Bandstand in Central Park.

Residents can learn more about Feet Forward and ways to help by visiting the association’s website at: footforward.org.

Howard hopes his act of kindness this week will inspire others.

“I paid for the pizzas, but it’s absolutely free to be nice to people,” Howard said. “It costs nothing and it makes you feel good. I hope this will change someone’s attitude for the better or that they will think positive and have hope themselves.