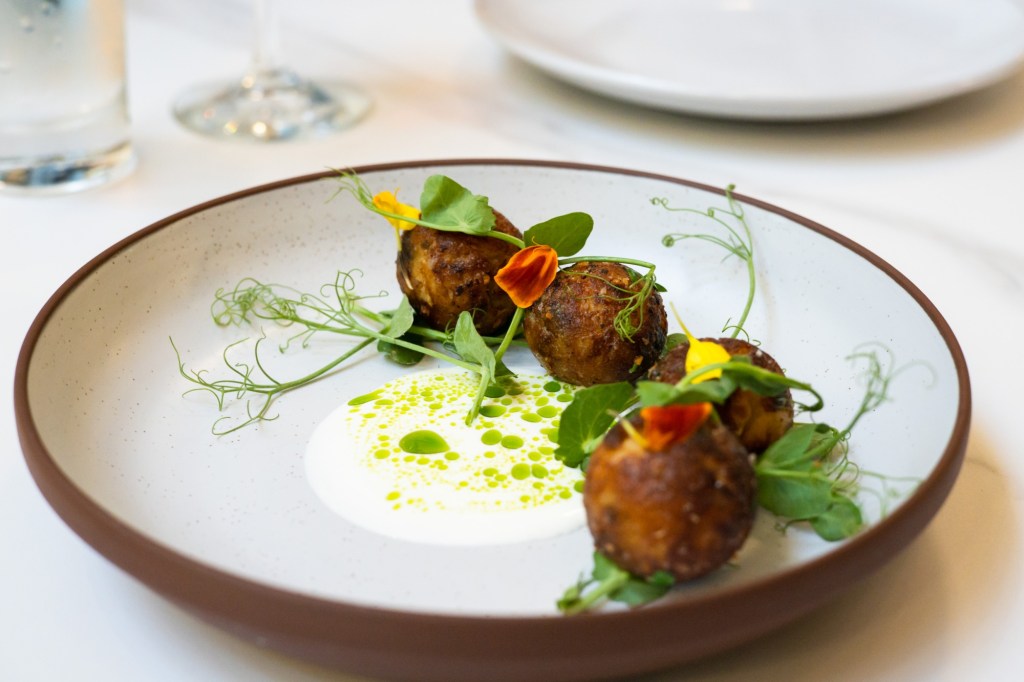 Few things in life seem more absurd to me than putting cheese on a good steak.

The tomahawk rib eye at Populaire, a new French bistro at the South Coast Plaza in Costa Mesa, is a very good steak, as it should be. It costs $140.

When the huge steak lands on our table, the sirens in my head begin to sound. My partner and I look at each other, then the steak, then again. “What is this thing?” asks my partner pointing to white lumps and blobs dotting the surface of the steak.

“I don’t know,” I say. I’m dumbfounded, still trying to process what I’m looking at. “Maybe it’s some kind of French butter?” The server has already left.

I reach for the tray and pinch a piece of that butter between my fingers and realize it’s not butter. It’s sticky. And then I notice a white bloomy crust clinging to some of those lumps.

Convinced that I’m going to hate this, I bring my hand to my mouth and reluctantly lick my fingers. “Hmm. Interesting.” The cheese is velvety and mysterious. It gives off a ripe and pungent but also buttery fragrance. It drags. I run my tongue inside my mouth, which now tastes like mold and funk. My stomach growls. My partner watches in suspense, awaiting a verdict. “Good?” he asks.

“That’s great,” I hear myself say. My words surprise me. But it’s great because the cheese flavors closely mimic the natural funk of expertly dry-aged beef. It’s practically the same scent.

“Wait a second,” I say, grabbing my phone to pull up the online restaurant menu and read the description again. Obviously, I hadn’t paid enough attention before impulsively ordering the most expensive thing on the list. The description is vague, just a few random words strung together, but there you go: “Saint Andrew”.

Saint-André is a French triple cream cow’s cheese, a zesty cousin of Brie, known for its powdery, flowery mold.

It is now with great urgency that I spread my fork on the table and drag a large piece of steak onto my plate. My knife glides through the meat with surprising ease. I lean down, inhale, and take a bite. My face is red. I can smell the triple cream funk as I chew. I’m glad it caught me off guard. If I had known in advance I would have ordered something else or asked for the cheese on the side. And that would have been a mistake.

It is an extraordinary piece of meat. But it’s not just that. It’s that cheese. Strange as it may sound, it’s an exquisite combination of flavors. It also impresses me as being so French, although I suspect it’s not deeply rooted in tradition.

Populaire is a modern French bistro, a partnership between Ross Pangilinan, chef/owner of neighboring Terrace by Mix Mix, and chef Nicholas Weber, who previously cooked at The Cannery in Newport Beach. The kitchen is entirely Weber. Or at least it’s the only one I’ve ever seen in the kitchen.

The steak isn’t the only revelation I’ve encountered here either.

Weber serves snails in ebelskivers, which are small spherical pancakes that look like donuts. Slide one of these into a buttermilk sauce, and you’ll see what I mean about the reveals.

Or think of lumpia stuffed with duck confit. These could be attributed to Pangilinan since he and the fried spring rolls can be traced back to the Philippines. They are served Southeast Asian style with lettuce and fresh herbs for wrapping and nuoc cham for dipping.

Although French to the core, Populaire’s menu leans heavily on Asian for ingenuity — and perhaps to differentiate this spot from the mall’s other, fancier French restaurant, Knife Pleat. Perhaps the most un-French thing for sale is a wonderful chawanmushi, a Japanese custard. This one is made with crab and sea urchin, as well as saffron dashi and yuzu kosho. This is the kind of dish I would expect to find in a very serious omakase restaurant like Hana re or Omakase by Gino, or perhaps in a glamorous five-star hotel bar in Paris.

The marinated fluke, on the other hand, seems to be inspired by Latin America. The sashimi-grade fish is served raw, like a ceviche, in a milky broth that reminds me of leche de tigre. French? Peruvian? No matter. This is delicious.

Frankly, I haven’t tasted anything here that wasn’t delicious. The menu is extremely limited, which I find refreshing. Other must-haves include a simple salad of peaches and finely grated sheep’s cheese, a beautifully seared (and simply gorgeous) duck breast served with pickled cherries and red endives, swordfish with peas and white butter, a minimalist Bordeaux-style flank steak and ultra-creamy mashed potatoes and for dessert a brown sugar cake with roasted peaches and fresh cream.

The restaurant only serves beer and wine, nothing more difficult, and I have never wished for anything more to complement Weber’s food. Despite the abbreviated selection, I still managed to find the perfect drink.

On each of my four visits I have been surprised at how devoid of customers this restaurant is. I don’t know why this place isn’t just crowded. I guess it’s a reflection of the foot traffic in that section of the mall, the entrance hallway between the two Macy’s. This wing of the mall looks like a meditation area. But there’s always been a bonus to that: Rockstar parking right outside the gates has been a breeze every time.

I can’t imagine it will stay slow for long, especially once word gets out about the royale with cheese. Weber whips up an amazing burger with chopped short ribs, gooey raclette, pickled onions and “secret sauce” on a homemade potato bun. You won’t find a better cheeseburger than this anywhere else in the mall, that’s for sure.

When: Lunch and dinner every day

What do the stars mean:

★ = average, may have outstanding qualities

★★★★ = transcendent, world class in every detail

Ratings are based on multiple visits and reflect the reviewer’s overall reaction to the food, service and ambience, taking into account a restaurant’s unique sense of place and perspective.