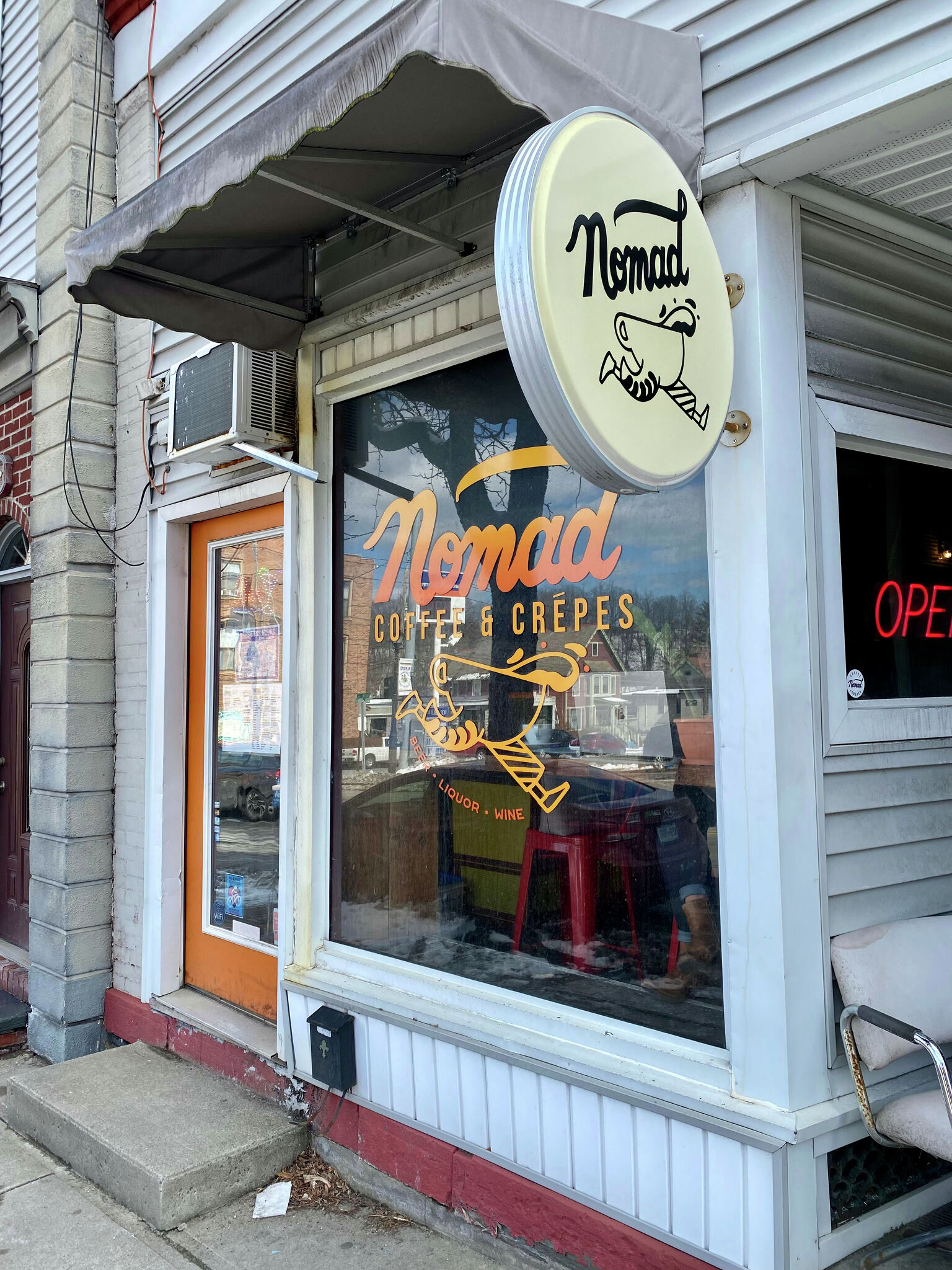 In 2017, at the age of 17, Nick Furnia took over his parents’ kitchen cooking island as an espresso extraction and cold brew station to make ready-to-drink coffee drinks. for sale in glass bottles around Ballston Spa High. While his roasting debut was at Wired Coffee in Malta, by age 18 he had graduated, apprenticed with roaster Delmar Brewtus Coffee, trained at The Loft at Irving Farm Coffee Roasters in New York, with which he had partnered in direct trade, and had joined the Specialty Coffee Association, a community science organization focused on promoting coffee excellence.

With the help of his father, Brian, Furnia outfitted Nomad Coffee & Crepes on Ballston Spa’s Milton Avenue, designed the logo of a running cup of coffee using the graphic skills learned at the school, built a following beyond the confines of the schoolyard and determined coffee production, not academia, would be his career path in life.

The upstate is as saturated with roasters and cafes as it is craft breweries that have closely evolved the landscape with regional, then local and hyper-local beers. But not everyone who roasts also makes high-end pancakes and cocktails.

Over the years friends have mentioned Nomad to me, but my interest was piqued after the pandemic by Instagram posts featuring Nomad (After Dark). One of these pop-ups, focused on Japanese cocktail culture, went where I didn’t expect a Ballston Spa cafe to go with a cocktail party and menu featuring Mizuwari Japanese Whiskey Highball, a gin-and-umeshu “umetini” and the sparkling pineapple-and-gin Million-Dollar cocktail popularized by Japanese bartender Shogo Hamada. Who, I had to know, was this guy?

Furnia is now the 22-year-old mature owner of Knockabout Coffee Roasters, with a monthly subscription service where he single-sources first and second harvests from equally young independent coffee growers in South America, running business Zooming into a dusty Spanish high school and roasting imported green beans at a commercial roaster from makers Mill City and Ozturk on the Furnia family farm.

It’s also on the cusp of its next move: expanding Nomad into larger digs just down the street where specialty coffee, cocktails and a chef-led kitchen can be combined under one roof in a larger space. than the 200 square feet they called home. four years.

The little Nomad Coffee & Crepes is as cozy and comfortable as a small West Coast wine bar. In a true labor of love, Nick and Brian spent a year scavenging materials for the interior, finding wood from a Ballston Spa barn, corrugated iron sheets for the bar and a vintage typewriter, bells and the mechanism of an old-fashioned doorbell for charm. . They rigged a 1971 jukebox to play songs for free, anchored the counter with a double wooden pouring system and plumber’s pipe, and stocked a lending library with tomes from Leo Tolstoy to Herman Hesse. They look right at home, considering the pancakes are all named after literary protagonists. There is Mustapha Mond from Huxley’s “Brave New World” and Gregor Samsa, whom Franz Kafka transforms into an insect in “The Metamorphosis”.

Still, the crepe names don’t match the content, and you can mix and match as you please. We borrowed the matcha green tea pancake from a Raoul Duke (“Fear and Loathing in Las Vegas” by Hunter S. Thompson) and filled it with strawberries, bananas and Nutella from Marion (Molly) Bloom in “ Ulysses” by Joyce.

The pancakes themselves are thick, arriving in big folds of linen on top of a sweaty cargo. Flavorful whole wheat lends itself to the task, and the Mustapha Mond, filled with chicken, guacamole, tomato, jack cheese and chili-ranch dressing, stands 2 inches tall. While some will adore a chocolate and peppermint crepe or the deeply seductive orange marmalade crepe with a flamboyant Cointreau filling, for me it’s the brooding stranger – Le Meursault, from “L’Etranger ” by Albert Camus – who quietly steals the show. A filling of roast beef and horseradish, asiago, parmesan and cheddar, crisp lettuce, tomato and onion, gives the impression of a deli sandwich gone rogue.

But let’s talk drinks. We are in a coffee shop despite a dozen cocktails on the menu and OYO Bourbon, Comerlet Coffee Cognac, Vermouth, non-alcoholic Seedlip and Monday Gin on the shelves behind the bar. A table lists current coffee imports, a choice of two: a dry-roasted (natural) Monte Verde from El Salvador with sweet tasting notes of strawberry and cocoa, grown at an altitude of 1,600 to 1,850 meters above sea level; and a Honduran Manos de Mujer, roasted with honey (natural pulped), grown at 1,524 MASL, with hints of tangerine and honey. Espresso drinks, single-origin sipping chocolate and matcha tea are all available, but our server – Furnia’s twin brother – recommends a pour to really see what it’s all about.

In 1615, the Venetian clergy condemned the entry of coffee into Europe through the silk trade routes as “Satan’s bitter invention”. It took off, caffeinating spirits and placing a cafe in every town. The coffee has since toured the world, freeze-dried, podified and codified by Starbucks with the high-pressure art of espresso giving way to the slow manual craft of pouring with extraction and water temperature in mind. of every barista.

Confession: I usually splash milk in my morning coffee or enjoy a flat white, but a pour is all about grind size, brew time, and temperature. Careful pouring of 190-205 degree water from a Fellow Stagg Gooseneck Kettle extracts the maximum taste, aroma and flavor. Our server brings the cup and the rest of the glass vase, the coffee as nuanced and honeyed as the brewed tea. In its pure form, it is easy to detect fruity notes and caramelized sweetness. Coffee beans are, after all, the seed of a fruit with as many variations as wine grapes, and flavor is a reflection of terroir and fermentation, like wine. I don’t add anything to my cup; he doesn’t need anything more.

For a “mission-driven” coffee roaster like Furnia, who speaks of similarities in the coffee and chocolate industries and the ugliness of slavery in mass production, it comes down to “the exploration and pursuit of flavor” and commitment to the producer: “In the end, it’s the farmer’s name on the bag. There’s beauty in honesty. I wonder: did I change that from any way?I don’t want to roast it too much so the kernels turn black and oily and change the flavor.

Talking with Furnia is a continuous stream of production and goals interspersed with friendly references to roasters from other coffee companies that he talks to about processes or beans, suggesting community in a way that I hadn’t not considered. Since you can’t see the inside of the equipment while roasting, Furnia found the finest thermocouple probes, drilled holes in his roasting machines, and connected them via a USB hub to his computer to collect data on every batch and every second of roast time. This is the science of coffee roasting, and its roasts are consistent by design.

Perhaps more surprising is Furnia’s focus on farm-to-table cuisine. His inspiration began in his grandmother’s kitchen in Pawling, Ulster, cooking international themed dinners, and includes at Nighthawks in Troy as the epitome of an exciting farm-focused menu “that is limited, reasonably priced, honest and constantly changing based on what they have.”

This brings us back to Nomad After Dark, for which Furnia has planned a St. Patrick’s Day-themed cocktail party with an Irish Negroni, a cocktail invented at Ramona in New York, and a dark berry tequila-blackcurrant cocktail named after after Dignam in “Ulysses”. It’s a thoughtful menu with more detail than most.

Given that Nick and Brian Furnia also sell used commercial kitchen equipment, a side hustle that may involve removing stovetops from closed New York kitchens, the new family nomad – pancakes and coffee discontinued from the name – is in good track for a projected opening this fall.