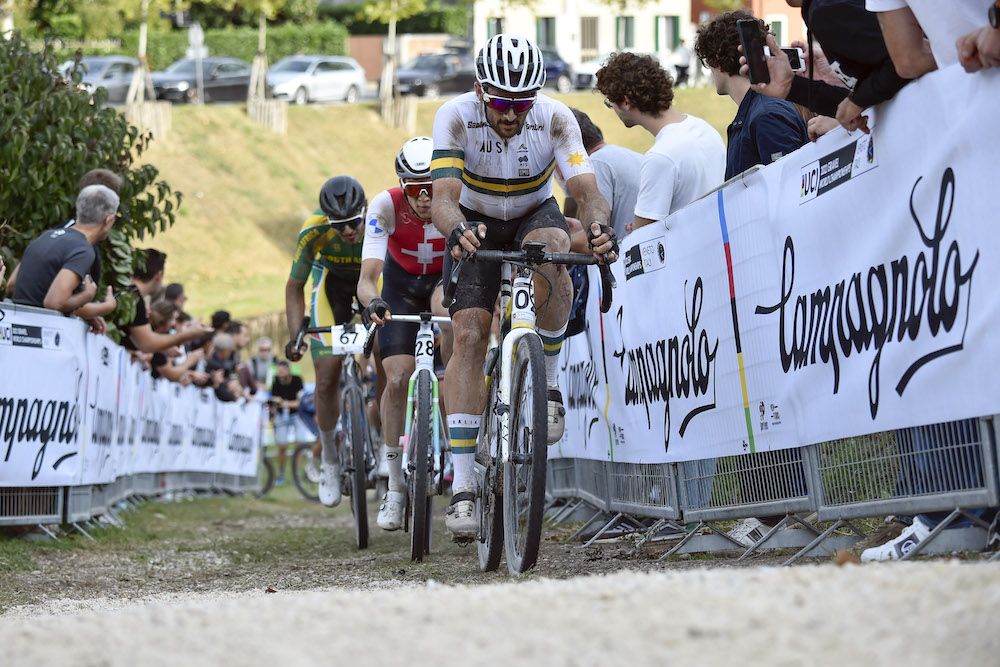 I’m sitting in a small town less than an hour from where we finished the race in Cittadella, Italy, tucked away in the back corner of an old stone restaurant. Sipping the last of my after dinner grappa, this traditional digestive seems the perfect couple to digest the event I had just put together; the first moment to reflect, zoom out and try to make sense of the first ever UCI Gravel World Championships.

Maybe it’s the overzealous wine, maybe it’s the warm embrace you feel of the amazing bigoli – one of my favorite pastas – or maybe it’s the buzz of the grappa. Who’s to say? But I find myself sitting here with a smile.

It’s a smile that transcends the moment, that belongs to a mood that began to take shape in the early hours of this morning, that could only be inspired by the experiences of that day.

Were all my prejudices and my preconceived ideas about the UCI Gravel Worlds wrong? Was that smile my way of acknowledging that I had perhaps been a bit hasty in prejudging the event?

It was a big day on the bike.

I started with a crash in the first 30 km, which I learned later, I broke my little finger, but I didn’t give up so soon and fought back. As the kilometers went on, two breakaways broke away from the main peloton and took an advantage of more than five minutes – a significant lead on the road journey.

We raced, we yo-yoed, we fought, and finally the winner came from that group of two up front. I finished 16th, a result I can say I’m proud of. I left nothing in the tank, finishing my first full gravel season at a different new event.

Rewind 24 hours and, in all honesty, things didn’t start on a good note.

At the technical meeting, we learned that WorldTour riders, most of whom had never even ridden a gravel bike, were awarded, based on their notoriety and road ranking, the front row at the beginning. Yes, the start of the GRAVEL World Championship. Priority was also given to mountain bike and cyclo-cross riders because, it was argued, they too have UCI points.

And what about gravel racers? It turned out that the UCI Gravel World Series, which myself and many other planes built our seasons on, and which even formed the basis of a qualifying system for Worlds, had no no standings or points. We were told we would start at the back of the field.

Nico Roche broke the internet that night with a tweet explaining this, and the overwhelming feeling from the gravel community was that our sport had been hijacked. We had been sidelined for the big names who only qualified through national selection and then took center stage in the big moment – ​​the moment built by those who actually invested in the sport.

Alas, that was rectified and a few of the gravel racers took rows two and three of the grid. But still, I don’t know how to feel about it. I mean, Tom Pidcock is the Olympic mountain bike champion, and he was thrown in position 70 at this year’s Mountain Bike Worlds due to his lack of UCI mountain bike points. I know the big names can get starting money, special perks and VIP treatment around the race, but everything should be equal between the start and finish lines, if you ask me.

So let’s talk about those generic jumpers. To be honest, I totally agree with the arrival of star names. A rising tide, as I have already said. I’m always happy to test my legs against the fastest guys in the world, and just as happy to lose. But maybe, just maybe, there was just a little too much weight on those wildcards, on the nations picking whoever they wanted.

Let’s look at the Italian team. In the men’s race, there were ten – TEN! – The knights. The maximum at Road Worlds is eight (nine if you have the defending champion). So why do we have even bigger teams here?

Moreover, the Italians were all truckers. The best dedicated Italian engraver is undoubtedly Mattia De Marchi. He’s won several major races over the past few years – including Traka, Badlands, Ranxo and many more – but he didn’t get a spot in the elite race as they opted to take a “pro” team. “Complete on the road.

Mattia still raced in his age class because, well, he’s a hero and he wasn’t going to miss that, even if he didn’t race us. Hats off to this class change. But it was really a shame for him not to have been able to compete in the category to which he belonged and to have really won a place.

The 10-man Italian team proved to be a great unit, racing against individuals.

The Australian team, for example, had five guys, but the first time we saw each other was at the start line and we had no infrastructure or support as a group. We even had to buy our own National KIT! Nothing to complain about, it is what it is, but it really makes it hard to be competitive.

Although missed on TV, myself, Carlos Verona and Nico Roche spent endless energy in the first 120km to attack and try to bridge the two leaders. Every time we tried we were blocked by the Italian team’s remaining nine riders, protecting Daniel Oss’ position on the road.

I may have had PTSD flashbacks to many, many years of national road championships in Australia where everyone was against GreenEdge.

The fact is that there is a fairly simple solution to this.

I would suggest the UCI reduce these wildcard places to five per race per country. At the same time, add qualifying points for UCI gravel races. Not only would this encourage more dedicated gravel riders to come, but it would result in a more balanced and authentic ride.

All in all, the UCI really organized an exceptional event. It’s big, it’s flashy and it’s incredibly hard.

Despite all my calculations above, I loved riding it. I would have liked a top 10, or even that elusive podium, and I will try again next year. It will always be an incredible challenge, but what better platform to pull it all off?

Let’s give it some tweaks and truly recognize that while gravel is a separate discipline, we need to treat it as such and give it the respect it deserves. Yes, the big names could still come, but hopefully no specialist would be left behind.

But should we leave that to someone else? I think here on my Cycling news blog that I’m going to start including some stats on gravel rankings, based on the MTB model. I mean, it might not mean anything, but if nothing else maybe the federations would take notice.

What does everyone think? Completely unofficial of course. Let us know in the comments…