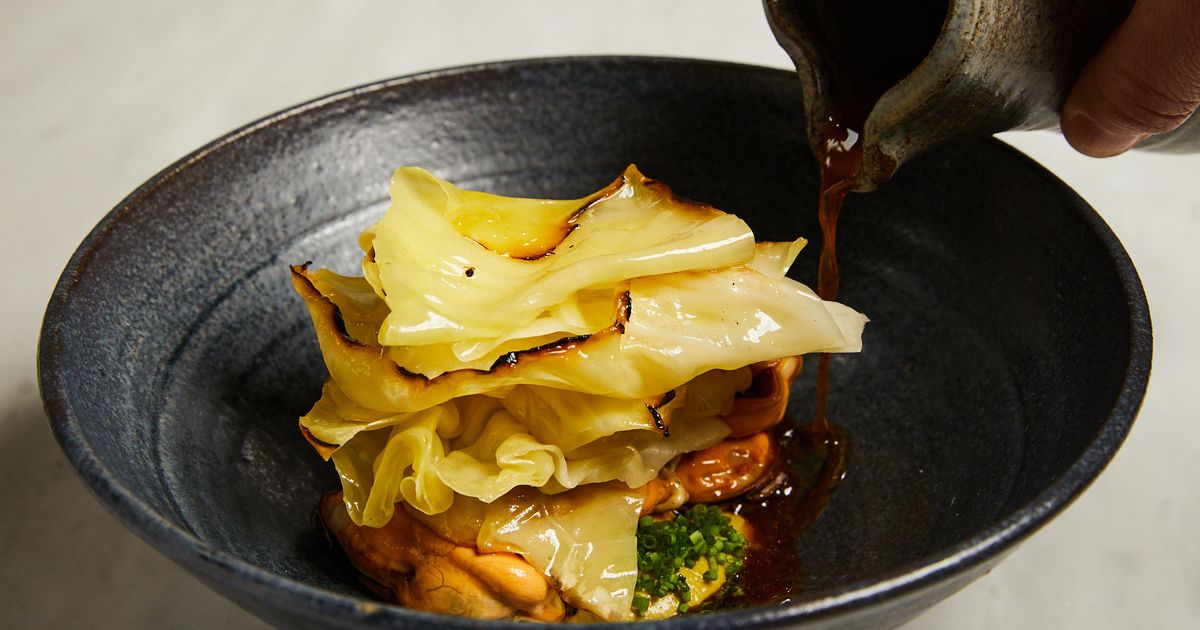 Restaurant cooking is an itinerant business, especially these days, and in recent years few cooks have traveled more widely around the city (or had their travels chronicled more avidly) than Victoria Blamey. After working in a series of high-profile kitchens, including Corton and Atera, the Chilean-born chef established herself as many chefs did, with an elegantly imagined beefburger at the reboot of the former West Village bar Chumley’s (” a grease-themed erotic poem,” Pete Wells called it). From there it was to Gotham Bar and Grill for a brief but well-reviewed stint, followed, once the COVID tsunami hit, by a series of “residences” – one in Connecticut, another at Fulgurances Laundromat in Greenpoint, and a third at the Stone Barns Center for Food and Agriculture in Westchester.

Now comes Mena, a shoebox from somewhere off the lobby of the Walker Hotel in Tribeca, which has that particular sense of style and permanence that for some reason has eluded Blamey over the of his itinerant career in the big cities. . The neat 45-seat establishment (named after the chef’s great-aunt) features clean marble tables, whitewashed walls, and a comfy blue felt-covered banquette that runs the length of the room. Trendy South American tunes mingle with the comforting sound of shaken cocktails at the bar, and if you arrive through Cortlandt Alley’s low-key entrance, you’ll feel like you’re the type of sophisticated, unexpected place to be on. you could have fallen. the carefree pre-pandemic times, after a pleasant day wandering the streets of, say, Lisbon or Barcelona or Santiago.

Blamey’s compact menu, which is a modified prix fixe costing just over $100 for three courses with options plus dessert, exudes a similar kind of quirky, ambitious pre-COVID charm. To the disappointment of some of my guests, his crowd-pleasing burger is nowhere in sight. Instead, there’s a silver Japanese sardine with wiri wiri peppers and potato salad, and a South American locro chowder served in an earthenware bowl. If you had visited recently, you might have chosen carefully selected shellfish (mussels, oysters and cherry pits) or blood sausage or a roasted whole squab for two, glazed with honey and presented deconstructed, including heart and head neatly spliced, on a square of black slate.

The aforementioned silver sardine from Tokyo Bay tasted cozy and seaworthy, and it was plated for freshness with a decorative thatch of fresh sliced ​​daikon on top. There were also strips of surfclam in a citrus-covered broth (Seville oranges and Nagami kumquats, for the record), and mini scallop beignet rings with marinated Jerusalem artichokes in the middle, placed, a bit awkwardly , in a lively orange leche with tiger sauce. The next wave of dishes included Spanish lentils topped with curly shavings of trumpet mushroom and a play on the French version of chou farci (stuffed cabbage), which Blamey and his cooks skillfully construct with a smooth, ivory-colored scallop mousse pressed between discs of green sea lettuce (it’s a type of seaweed) and rest on a frothy chowder-like reduction.

Blamey has a penchant for spicy, bitter, and artfully earthy combinations in this new, more challenging post-burger phase of his career, and inevitably some of his experiments work better than others. On one of my visits, the Japanese sardine was replaced with milder slices of bluefish kuromutsu, the subtle flavor of which was largely erased by a giant drop of smoked mashed avocado. A perfectly cooked leg of pheasant was similarly overwhelmed by a large, mushy pool of red mole, and if you’re a fan of the noble, simply cooked carrot, I’d advise avoiding an overworked dish called “Kyoto Carrot.” , which was jammed with so many aggressive flavors and textures (bitter chicory, pickled carrot slices, a heavy topping of mayonnaise sauce, this time spiced with chillies) that I quietly brushed it aside.

However, the owner of this chic little restaurant has earned the right to experiment, and some of her best creations are worth the price of admission. On the current menu, these include this boudin, topped with chunks of bread fried in pheasant fat and slathered in a sumptuous potato mousse, as well as this nourishing and funky chowder, which has been folded with generous amounts of snow crab and thickened with black beans. and fermented squash. If you want a taste of southern Chile refracted through an innovative, modern sensibility, call up the plump cholgas secas (soft, barely charred Maine mussels and cabbage leaves with a delicious onion reduction), a dish which was followed in the evening had it by a dessert of soft and creamy Pavlova flavored with pomelos, pink lemons and sweet candied and glued angel hair squash, like a brightly colored little bird, with wings meringue decorations.

To open: Dinner, Tuesday to Saturday.
Prices: $125 for a fixed price of four courses.
Recommended dishes: Japanese sardine, stuffed cabbage, cholgas secas, winter pavlova.
To note: With its elegant drinks with Latin American accents, it is one of the best new bar-restaurants under Canal Street. There are only six seats, so get there early to get a seat.

Thank you for subscribing and supporting our journalism. If you prefer to read in print, you can also find this article in the April 11, 2022 issue of
New York Magazine.

Want more stories like this? Subscribe now to support our journalism and get unlimited access to our coverage. If you prefer to read in print, you can also find this article in the April 11, 2022 issue of
New York Magazine.

By submitting your email, you agree to our Terms of Use and Privacy Notice and consent to receive email correspondence from us.