King Crab in the Midway District 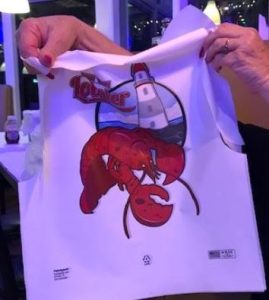 King Crab in the Midway District

I observed the space where soup planting used to be, wondering what could go in there as it seems buffets are a thing of the past. So when my daughter Michele and I walked into king crab it was almost deja vu – but not quite.

The large buffet tables in the center of the room were gone, and it was a large open space, but the table layout is almost the same as the previous restaurant. And all the similarities end there. Let’s start with the most intriguing menu I’ve seen in a long time.

The next item on the menu is titled “Get Your Hands Dirty”, which blew our minds. There are 3 steps – choose your catch, choose your seasoning and choose your spice level. There are 13 items to choose from, including crabs, lobster, scallops, shrimp, crayfish, mussels and/or clams.

But this is where we had to rely on our fantastic waiter – Rafa – for directions, because you order what you want by the pound! He must have thought we were complete losers, as we kept asking about this section of the menu.

Personally, I don’t like hot crab; I prefer it cold. So I asked him which item was cold crab. And that was the mind blower – there is none.

He explained to us that the fish dishes were first put in a bain-marie and then put in plastic bags. They add your chosen sauce and finish it in the bag. Like my daughter said, it’s the weirdest thing to see when they bring that huge steamed bag to your table.

They offer three salads and two soups – clam chowder and okra, but a variety of side dishes. There are also daily specials and combos.

I don’t think I’ve ever asked Rafa so many questions at any restaurant before. He was charming in his responses and made great suggestions. Michele and I were very grateful for his help.

So what did we have? We decided to do some ‘grazing’ – which was fun and delicious. We started with Clam Chowder – $7.50 – and it wasn’t served in a bowl. It was served in a cardboard container, but of good quality. At first, Michele was hesitant to taste it as it had a green tint to it and she was afraid it contained split peas – which she cannot eat. However, she tasted it and said it was delicious. (She was right! I had a few spoonfuls and would love their recipe!)

We went from soup to ten Hushpuppies ($4.50) served with a savory sauce. We also ordered 3 crispy and warm spring rolls ($4.50). They were also very good. Grazing is so much fun!

We ordered their “Bang, bang prawns” ($12) which had lots of prawns on the plate as well as a side of rice which was drenched in the most delicious sauce we’ve had in a long time. We finished dinner with a half pound order of scallops, which were served in the steamed bag with a potato and a little corn on the cob.

I have to say when I heard how it was cooked I was very reluctant to order it. The idea of ​​it being cooked in a double boiler didn’t appeal to me much, but I wanted to try something from that part of the menu, and since scallops are my favorite shellfish, I went for it. I was not disappointed, and would order it again. They were sweet, tasty and filling. It was listed at $32 a pound and I got at least $16 worth of scallops.

Along with all the food, we were given bibs to wear; gloves to wear; and the food was served on paper plates. As I said earlier – I was very skeptical of how things were prepared and served, at first, but the meal was delicious and there’s no way I’m going back. I would rearrange everything we had to eat because everything was so good.

I also want to say that when I do a review, I never introduce myself. Neither Rafa nor Jennie the manager knew I was doing a review and their service was amazing. I watched them interact with other diners, and it was lovely to watch. They took their time explaining the menu to diners and as it was the first time for many of us I imagine they could get very tired of repeating the same thing over and over. But smiles and explanations were welcome, and I think this new restaurant will be a success. Try it.

And don’t be afraid to ask your questions. You will like it.