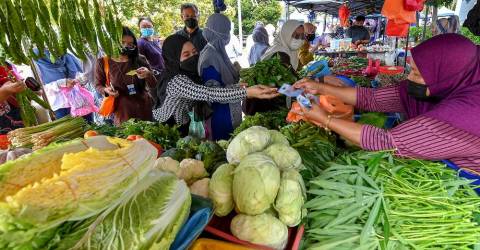 KOTA BHARU: Kelantan will not face a food shortage situation because the production of rice, fruits and goats has exceeded the level of self-sufficiency of the population.

Tuan Mohd Saripudin Tuan Ismail, chairman of the national committee for agriculture, agro-industry, biotechnology, green technologies and the environment, said that this proactive measure had been implemented by the government. State on May 11 by creating the State Food Security Steering Committee chaired by Menteri Besar Datuk Ahmad Yakob. and the State Food Security Working Committee chaired by Secretary of State Datuk Nazran Muhammmad.

He said the two committees involved various government and state agencies, local authorities as well as representatives of higher education institutions to refine relevant issues and appropriate solutions to solve the problems that arise.

“Based on 2020 Self Sufficiency Level (SSL) data, this shows that Kelantan is on track to achieve its mission of becoming the national food bowl.

He said this in his response to a question from Rohani Ibrahim (PAS-Tanjong Mas) at the 14th Kelantan State Assembly sitting in Kota Darulnaim today.

“Among the measures taken by the state government is the granting of a special allocation of RM10 million through the Kelantan Agricultural Development Corporation for the implementation of semi-automatic broiler chickens and integrated cattle breeding in oil palm plantations.

“We are also intensifying community involvement in campaigns related to the agriculture, livestock and fisheries sectors such as the Green Kitchen campaign, Seed Community as well as the seed production and storage campaign of cultures,” he said. — Bernama