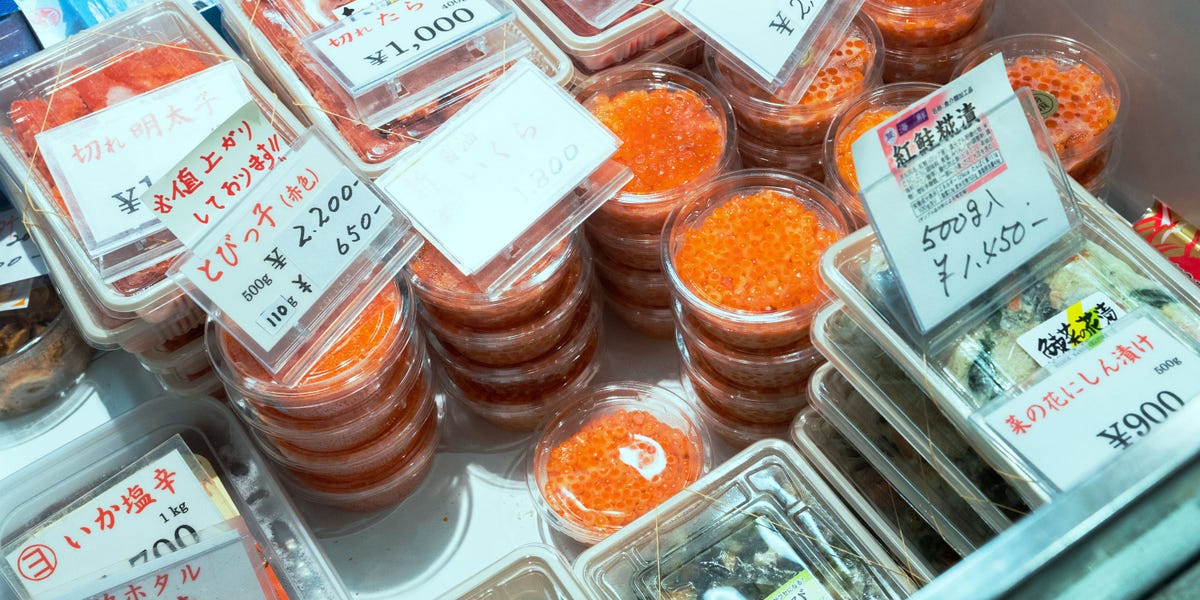 TOKYO, Japan — Sushi, a standard and cheaper option on the menu of Japanese restaurants, is facing a crisis in the country.

The Russian-Ukrainian war, rising costs and declining freshness have driven food prices up.

“There is currently a shortage of salmon, and ikura is in real danger,” said Yoshinobu Yoshihashi, a “naka-oroshi,” or intermediate wholesaler, at Toyosu Market in Tokyo, the country’s largest wholesale market. .

The salmon found in Japanese sushi is usually farmed salmon. Chains of conveyor belt sushi restaurants – where food is served on conveyor belts that customers take to them – often use salmon from Norway, the world’s largest producer of Atlantic salmon.

But since late February, Russia has imposed restrictions on its airspace, making it necessary to find alternative routes for flights bringing Norwegian salmon to Japan.

Yoshihashi said the salmon is now flown from Norway to Japan via Dubai in the United Arab Emirates.

Longer routes are more expensive and also mean the fish loses its freshness. There are also fewer flights, so supply has dropped.

“It’s difficult for us to immediately factor higher import costs into our pricing,” Yoshihashi said.

About 70% of the salmon and trout imported from Japan come from Chile, and most of it is frozen. About 20% come from Norway and 10% from Russia.

Data from the Ministry of Agriculture, Forestry and Fisheries on imports and exports indicate that Japan imported about 10% less salmon and trout from January to April, compared to the same months in 2021.

But prices have risen about 15%, according to the data.

Yoshihashi said that while business was “recovering slowly after the easing of COVID-19 restrictions,” there were still fewer people drinking late and selling expensive food was particularly difficult.

Ikura, another common sushi dish, is facing an even bigger crisis than salmon, Yoshihashi said.

Ikura is a processed food made from wild salmon roe.

Shio ikura, or salted salmon roe, is the most popular type of salmon roe.

Salty ikura is available at high-end sushi restaurants. At a common sushi restaurant, ikura can be purchased for a few hundred yen. In the case of salted salmon roe, the price can exceed 1,000 yen.

Yoshihashi said the price of ikura could even double.

It has become harder to import and export, and there have also been two years of “poor fishing”, Yoshihashi said.

Toyosu market statistics showed that the average price per kilogram of ikura was 7,333 yen in 2021. Between 2016 and 2020, the average price was around 5,500 yen, so prices were already increasing before the Russian-Ukrainian war.

Since the 1980s, Japan has promoted a hatching and stocking program in an effort to help its salmon population rebound.

“The population fell sharply in the second half of the 2010s. According to 2020 data, the catch was around 50,000 tonnes. In other words, it fell to the level before the start of the program hatching and stocking of the 1970s. We are currently investigating the cause,” Sato said.

The hatching and stocking program releases approximately 1.6 to 1.8 billion juvenile salmon into the rivers each year. Salmon released into rivers travel downstream for a few days to a month and mature in the ocean. They then return to the river where they were born or released a few years later. Only a small percentage are able to return safely.

“It takes about four years for salmon to return to the river they were born in. In other words, they spend about four years at sea. I think the changes in the marine environment caused by climate change are something to think about,” Sato said.

While the salmon population remains low, ikura prices are expected to remain high, even if the Russian-Ukrainian war were to end.