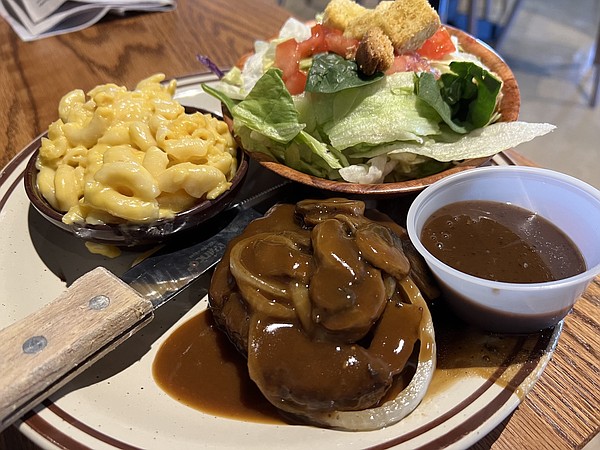 It took months and months – with countless delays – but Homer in early summer finally completed his 14-block move west on North Rodney Road in much of what was once Franke’s cafeteria, marking his complete conversion from Homer’s West to Homer’s Kitchen Table.

One of the hardest things about Homer’s kitchen table meals, however, is getting a dining room table for lunch. It was even harder than finding a parking space.

We made two attempts to have lunch there and both times we had to wait at least half an hour.

This first time, as we turned away from the front door and the line of customers, we discovered that there was a separate door to the side for takeout orders, so we passed a order to go and took our food back to the office.

The second time we took a colleague’s advice and sat at the bar, where you can get full service.

The third time we decided to be very smart and arrived at 3.30pm, long after the lunch rush and by our calculations early enough to beat the early risers. We outdid ourselves: the place was practically empty. Lots of tables to choose from, yes indeed.

The biggest plus of the new location, besides more space in the dining room – did we mention the place is always packed at lunchtime? — is a larger kitchen, which will allow for a slightly expanded menu, including a wider possible range of desserts.

Let’s confirm that these people are not beginners when it comes to home cooking. The original Homer’s on Roosevelt Road has been serving it successfully for decades, and Homer’s West has done a great job since opening in 2012. You can also still get a huge amount of food for a very reasonable price.

Considering that the move and conversion took place in the midst of a pandemic, however, one could have hoped for better social distancing in the new dining room.

Once we got away from the half hour wait – not everyone, as we’ve noted in other contexts, has such a long lunch break – the large number of people, crammed into entering while waiting for tables, or sitting side-by-side-jowls unmasked in the dining rooms, frightened Intrepid Companion, so much so that it refused to accompany us on subsequent visits. Sigh.

Aside from the proximity to other diners, however, the space is pleasant, with wooden tables and comfortable wooden seating. Instead of artwork on the walls, there are at least eight big-screen TVs showing mostly (muted) sports programming. We only heard the classic rock soundtrack on our third visit, when it wasn’t drowned out by the volume of human voices and clinking plates.

The second time we sat at the end of the bar, far enough away from the nearest customer and with a chair next to us that sat vacant until we were ready to leave.

It had been long enough since our last visit to the old Homer that we could not remember that, for some reason, the kitchen concentrates all of its best specialties on Thursdays – chicken and dumplings, chicken and vinaigrette, honey-glazed ham and platter of Homer’s Tamale. . Such a difficult choice that we didn’t really do more than glance at the menu.

Homer’s Chicken and Meatballs ($12) is quite soupy — more like chicken soup with meatballs than his usual preparation here (in a starchy white sauce); it was tasty, however, and chock full of shredded white and dark meat and the pasta-like dumplings were cut into bite-sized pieces. It came with two sides; we opted for the sweet corn kernels and some distinctly – and unexpectedly – sharp macaroni and cheese.

Full meal service is available at the bar, nice to have when the restaurant is packed and there’s a wait for tables. (Arkansas Democrat-Gazette/Eric E. Harrison)
We also, based on some raves we’d seen on social media, ordered the Fried Pickles ($9) from the entrees menu, available not just in slices but in six large spears. They were piping hot right out of the fryer – as hard as it is, you should let them cool for a few minutes to avoid painful mouth burns. But they were delicious, and since we couldn’t finish them before our entree arrived, we took half of them home and perhaps enjoyed them even better as cold leftovers.

We relied on the menu for our early bird adventure and since we were already leaning in that direction, we took the waiter’s recommendation for the Smothered Hamburger Steak ($12), a half pound of grilled ground beef topped with a brown sauce and sautéed mushrooms and onions. The onions weren’t sautéed as much as we might have liked – they weren’t raw, but they were still a little crunchy and, well, onion, but overall we made a fast work.

On the side, we opted for a salad that was mostly iceberg lettuce, but with other greens – was that a spinach leaf? – plus chopped tomatoes and crispy homemade croutons. The cup of our choice of dressing – balsamic dressing – came to the side so we could add as we wished. (The dressing, which was almost exactly the same color as the sauce, spilled a bit, creating a very interesting flavor combination that we dipped into the huge fluffy yeast roll that came free with the meal.) Our Revisit mac and cheese, however, was disappointing: the cheese sauce didn’t have nearly the same kick the second time around.

We remembered, perhaps incorrectly, but (perhaps incorrectly) confirmed by the waiter, that yes, Homer made his own lemonade. But based on the slightly chemical taste, we’re pretty sure the large plastic container ($3) he brought to our table contained the Minute Maid stuff from the dispenser. Bleah.

We gave in to the waiter’s decision to sell us the day special banana pudding – $6 which seemed quite expensive but turned out to be a huge amount of pudding, banana slices, wafers a la vanilla (top and bottom) and whipped cream, all served in a mason jar.

For our takeout order, we took home a Patty Melt ($11), half a pound of ground beef with sautéed onions, mustard, and Swiss cheese on toasted rye (since we consider mayonnaise on red meat is heretical, we had them hold the mayonnaise). It was a little greasy to the touch but was a real taste treat, and it came with a big pile of crispy home fries.

The service was universally good, at dinner partly because our waiter had no other tables to cover, and at lunch perhaps, partly because the wait staff included two ‘refugees’ we know who worked at the late Cathead Diner.