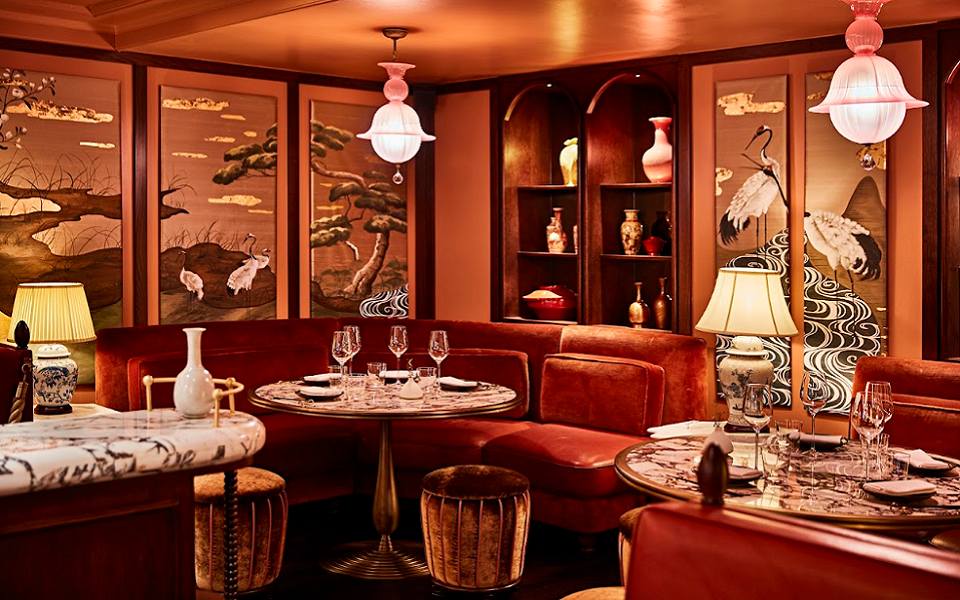 Sitting for dinner at the Aubrey, a waiter tells me the restaurant is an ode to “Japan’s laid-back izakayas, the country’s answer to laid-back restaurants like pubs.”

I have visited Japan and can attest that izakayas are indeed a bit like pubs. I ate at one in Shinjuku, Tokyo, where men stood alone on wooden benches, drinking whiskey mixed with sparkling water. One of them tossed me fried shrimp on sticks and nodded at me smiling and gesturing when they arrived. It was the best kind of communication we could muster. At another, we sat underground amid thick clouds of cigarette smoke as businessmen ordered what was essentially Japanese fast food from digital screens of order at the table late at night.

At The Aubrey, the new venue that just opened on the ground floor of the Mandarin Oriental Hotel in Knightsbridge, I’m pretty sure I’m in an extremely luxurious restaurant rather than an izakaya. My guest confirms that yes and that I do not lose my marbles.

Also confirming my belief, salmon-colored sofas, original 18th-century apothecary artwork and three-part paintings, spanning entire walls and depicting Japanese views that take me anywhere but where I can see out my window: the ground floor retail space at Harvey Nichols across the road.

It’s a creative take on an izakaya, but I’m not entirely unhappy. The dining room is well balanced, offsetting the outside world with a Japanese trap music playlist and curious artifacts, leaving the place cozy without feeling cramped.

I’m sad that the probability of being smiled and buying food by a friendly Japanese is low, but I hope the reward will be better quality food. Everything is designed to be shared and is inspired by the classic Japanese cooking techniques of Edomae, Tempura and Robata sushi.

We start with sushi. In izakayas, as in the rest of Japan, the sushi is served on a bed of hot rice, and the fish is also at room temperature. In the Mandarin Oriental’s izakaya, the sushi is Westernized and mostly unremarkable, save for a richly greasy sea bass, one with caviar and a strong, minty shiso leaf that counteracted the intensity elsewhere, and a latest provocateur: yellowtail tuna with ants, sacrificed on fish for a citrus kick.

My guest texts the next morning: “I removed another piece of insect.

The oysters are tiny but burst like pretty little bites of the sea, and topped with daikon pepper and ponzu, they are authentic. For the main course, the Iberico Secreto pork is a fascinating discovery. Cut into ambitious slices, they could easily have crossed the finish line to beat the cheeky favorite candies Juicy Fruits to lift the trophy for the juiciest food on the planet.

Can Park Chinois in Mayfair combine dinner and cabaret and make it good?

Dishes arrived one or two at a time, a refreshing response to the usual ‘all at once’ narrative of sharing plates that always feels aggrieved. Next is the Saikyo Miso Sablefish, dramatically burnt on top, which had a soft textured crunch from the miso to offset the depths of the cushiony sablefish.

A Wagyu oxtail and bone marrow fried rice came with marrow in the bone – it was great fun scraping it myself into the densely fried rice, the meat adding a wonderful fatness to the rice already rich. The bone marrow cleverly blends into the dish, leaving behind its defiant appearance and inserting invisible streaks of loud flavor into the rice, as decadent as the honey mixture in the porridge. Everything is balanced by a welcome plate of fatty leeks with red miso and shiso vinegar.

The wine comes from all over the world, but it’s great to pair the food with countless iterations of saki, all from Japan. We also couldn’t get enough of a luscious enough German pinot noir with flavors of red berries to almost make pork robata the ‘juiciest ever’ trophy.

Too bad the restaurant is dedicated to Aubrey Beardsley, an 18th century British artist with a fondness for Japan, rather than a Japanese. But I guess that theme fits: the food at this opulent, dimly lit izakaya with rolling canapes to while away the hours feeling designed for the British palate. It’s not risk taking, but it’s good.

The Aubrey is a new restaurant at the Mandarin Oriental, Knightsbridge