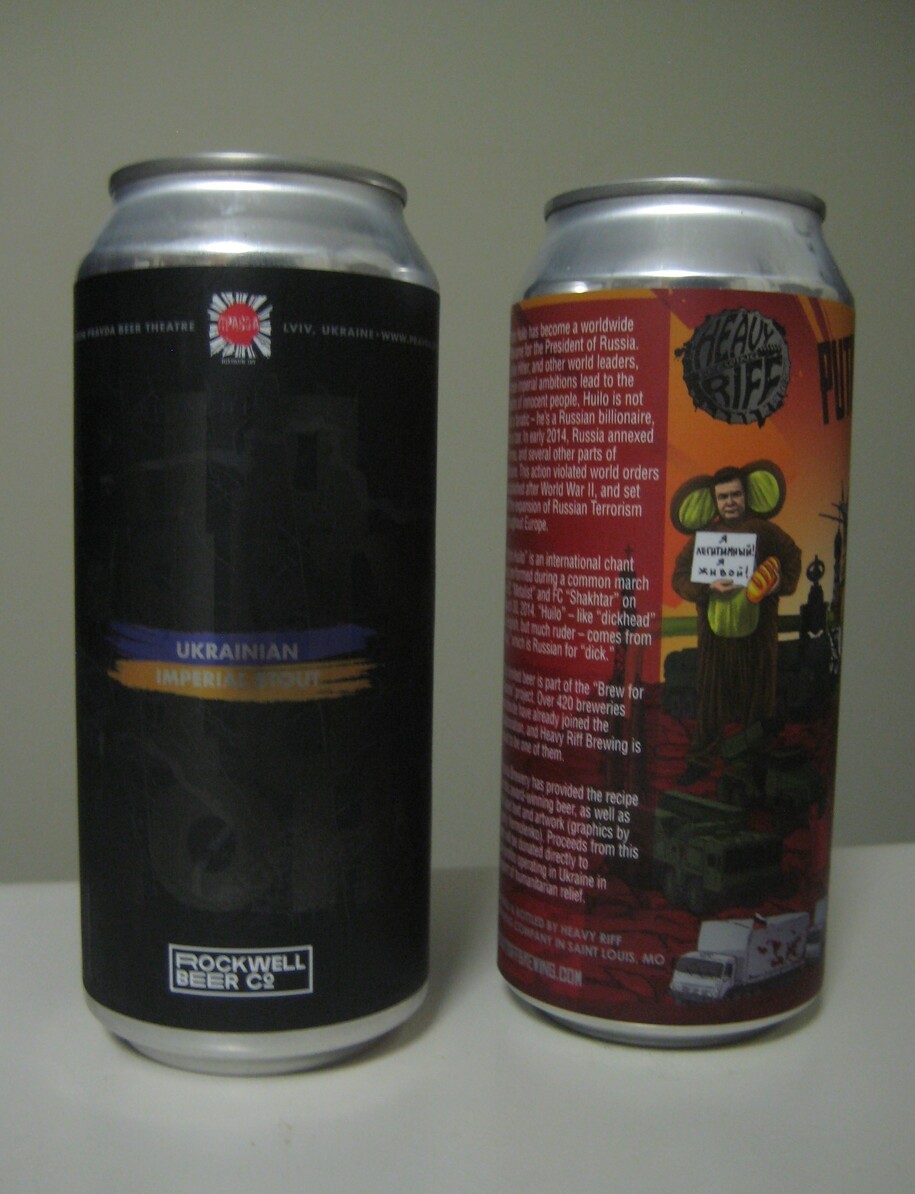 Greetings, beer lovers! Happy (…) Friday, and once (or not) again, it’s chingchongchinaman as your semi-friendly guest FNBB blogger, giving the Eskimos another well-deserved break from blogging duties tonight. This ETNF follows the Loser’s March ETF on the Brew for Ukraine movement, where, to recap:

* Pravda Brewery in Lviv, Ukraine has opened up its recipes to the world, allowing other breweries to brew their own versions of Pravda Brewery’s beers.

*Each of these breweries are invited to donate the proceeds from the sale of these Pravda brewery-inspired beers to charities related to humanitarian aid in Ukraine.

A quick look at the map on the Brew for Ukraine page indicates that 7 breweries in the St. Louis, MO area have produced new craft beers inspired by Pravda Brewery. The honor roll is as follows, with the breweries listed in alphabetical order:

Oddly enough, a local craft brewery that recently made a Brew for Ukraine beer is not on this list, for some reason (probably hasn’t taken the time to contact the Brew for Ukraine organizers yet). This is Rockwell Beer Company, who brewed an Imperial Ukrainian Stout, “From San to Don,” as you can see in the photos here. The label includes part of the text of the Ukrainian national anthem, the words of Pavlo Chubynsky:

“We will lay down our souls and

And we will show that we brothers

are from the Kozak nation.

We will stand together for freedom,

from San to Don,

We will not allow others to rule

At least one of the 7 listed STL region breweries featured RBC’s “From San to Don” on tap in their restaurant and brewery, Heavy riff brewing. Heavy Riff Brewing has its own selection inspired by the Pravda brewery, its dry-hopped golden beer “Putin Huylo” (“Putin Is A D-ckhe-d”, for those who may not remember the translation). On the label, Heavy Riff Brewing provides explanatory text (light elisions c/o 3CM the loser):

“Putin Huilo has become a worldwide nickname for the President of Russia. Unlike H-lt-r and other world leaders whose imperial ambitions result in the deaths of innocent people, Huilo isn’t just a bigot – he’s a Russian billionaire, not a czar. In early 2014, Russia annexed Crimea and several other parts of Ukraine. This action violated the world orders established after World War II and triggered the expansion of Russian terrorism throughout Europe.

“‘Putin Huilo’ is an international chant performed for the first time in a joint match between FC ‘Metalist’ and FC ‘Shakhtar’ on March 30, 2014. ‘Huilo’ – like ‘d-ckhe-d’ in English, but much coarser – comes from ‘huy’, which is Russian for ‘d-ck’.

Since my beer palate isn’t that fancy, both beers sounded very good to me. Obviously, it’s a small gesture to buy these beers to support Ukrainian relief efforts. It’s certainly not as if it were as easy as making a James Bond on Putin and his thugs – if it were that easy (and none of us are exactly lining up for this mission). 3CM the Loser will certainly be keeping an eye out for other STL breweries making their own Brew for Ukraine beers, so some future FNBBs might continue that theme. We will see. For tonight’s dinner beer, I went with Rockwell Beer Company’s “From San to Don”. It packs a big punch at 9.8% ABV, and is certainly a hearty stout.

With that, it’s time to give you the floor. What are you sipping tonight? Anyone brewing theirs? Has anyone found Brew for Ukraine inspired beers in your own neighborhood? This is a question for the poll, of course 🙂 .

Have you found and/or tried any of the “Brew for Ukraine” beers?

Have you found and/or tried any of the “Brew for Ukraine” beers?