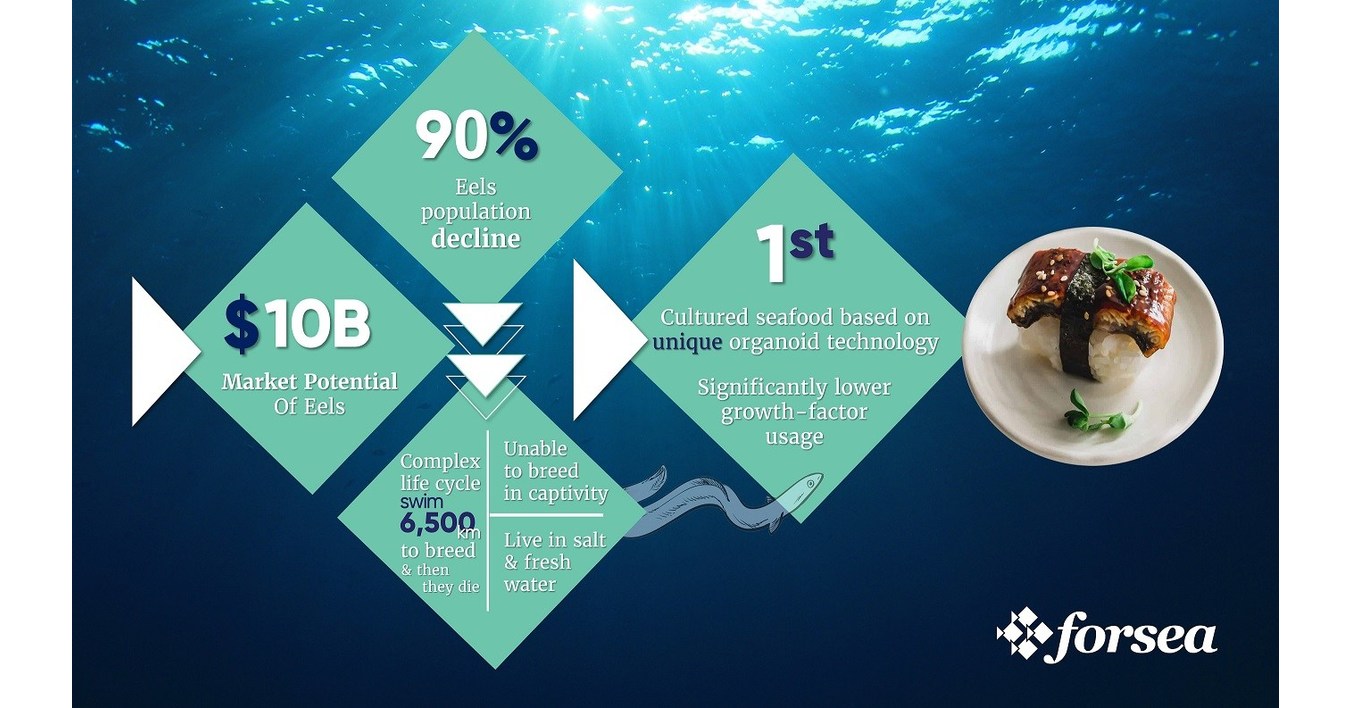 ASHDOD, Israel, September 6, 2022 /PRNewswire/ — With the dawn of cell-grown seafood making waves, a new player has arrived. FoodTech start-up Forsea Foods, Ltd. announces that it has brought this new concept closer to natural perfection thanks to its patented organoid technology.

Previously used in developmental biology, medicine, and research, organoids are three-dimensional tissue structures derived from stem cells that, when used in cell-cultured seafood, require only a minimal amount growth factors. The start-up announces this it started its activities by targeting supply shortages in the eel meat market.

Developped by Iftach NahmanPhD, co-founder of Forsea, the organoid approach to fish tissue formation involves creating an ideal environment for fish cells to spontaneously form their natural composition of native fat and muscle. They grow as a three-dimensional tissue structure the same way they would grow in a living fish.

Culture of fish cells in the organoid way

“While cell culture largely focuses on a system of directed differentiation, where cells are signaled to differentiate into a specific cell type and are then combined on a scaffold, our system grows the aggregate of the different cells already at the initial stage of the process. Cells organize themselves autonomously in their innate and intentional structure, just like in nature,” explains Nachman, principal investigator at Tel Aviv University.

The result is sustainably produced, succulent farmed seafood fillets that embody the same taste and textural characteristics as their ocean-caught counterparts. Unlike these counterparts, however, the resulting product is free of pollutants such as mercury, industrial chemicals and microplastics. Forsea says they will also produce the same nutrient profile as traditionally farmed seafood. “It depends on how you feed the cells,” says Roee Nirbiotechnologist, CEO and co-founder of Forsea.

“The fish cell culture organoid method has multiple advantages,” adds Nir. “First, it is a highly scalable platform that bypasses the scaffolding step and requires fewer bioreactors. This makes the process much simpler and more cost effective. Additionally, it greatly reduces the amount of expensive growth factors needed.

Fueled by The Kitchen FoodTech Hub, the start-up was created last October, with an initial injection of capital from the Israeli Innovation Authority (IIA) and the Strauss-Group. The new venture brought together Nir, Nachman and Yaniv ElkoubyPhD, senior researcher at Hebrew University of Jerusalem and expert in cell developmental biology who has devoted many years to the study of pool biology.

Not so many fish in the sea

“Seafood demand shows no signs of slowing down,” says Amir Zaidman, vice president of business development for The Kitchen Hub. “In fact, global demand is expected to almost double by 2050. But we are rapidly approaching the point where there will simply not be enough fish in the sea to sustain the global community. Forsea’s innovative new culture platform has the potential to bring positive disruption. to this paradigm by providing a clean, nutritious, delicious, and commercially viable alternative to wild-caught seafood while leaving the delicate ocean ecosystem completely intact.”

While Forsea can grow virtually any type of seafood, the company says it is currently focusing its efforts on growing freshwater eel meat. “Eels are a highly sought-after delicacy, especially in East Asia. However, overfishing in recent decades has made it an endangered species. The Japanese eel population alone has declined by 90-95%, driving prices to astronomical levels. Eel meat is sold in Japan until $70 per kilogram. They are also considered the most mysterious creatures in the ocean, undergoing an unusual metamorphosis,” Nir reveals.

The mysterious life of eels

One of the most striking characteristics of eels is that they cannot reproduce in captivity, which makes it all the more complex to rear them for food. Eels live most of their lives in fresh water and, when ready to procreate, will swim 6,500 km through the deep ocean to one of two very specific meeting points: the Sea of Sargassum, near the Bermuda Triangle, or offshore Guam. And once they reproduce, they die. What comes back with the help of ocean currents are two-gram baby eels. These can be fished and reared in controlled tanks where, within a year and a half, they turn into 250g adults.

“The market demand for eels is huge,” adds Nir. “In 2000, the Japanese consumed 160,000 metric tons. But due to overfishing and rising prices, consumption has fallen to only 30,000 metric tons. There is a huge gap between supply and demand for eels that traditional aquaculture cannot satisfy. This problem is getting worse. , Europe prohibits the export of any type of eel product. The market opportunity for cell cultured eels is huge,” concludes Nir.