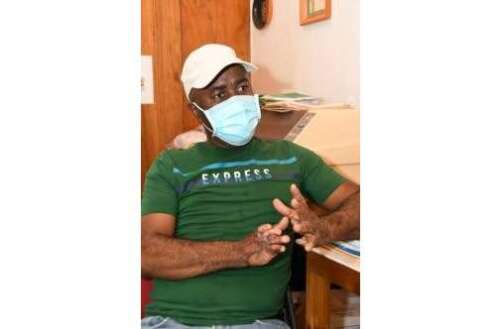 Newton Coote tells his story of child abuse and how St John Bosco helped him through life. (Photo: Garfield Robinson)

To at the age of four, Newton Coote’s father wrapped his hands in newspaper, poured kerosene into them, and set them on fire.

This period saw Coote struggle to accept that his parents would have done it and then abandoned him.

“I was ashamed to show my hands, and when people asked me the question, I cried. Sister Suzan Frazer told me others had it worse and I said it was true. Others are hit harder than me,” Coote told the Jamaica Observer.

Even then, Coote said adjusting to life in a boys’ home was not easy and he “just hated it”.

“I was born in Kingston and I remember looking while driving here and wondering what this bush is. I wanted to go back to Maxfield Park. Over the years, I tried to adapt. When I was at Maxfield Park, I had nothing to do. The beds were made for us, the house cleaned for us. It was like day and night. Here, you had to fix your dorm, get up from 5 a.m. before school, sweep the yard, and do your chores.

“It bothered me a lot not to know my family. For the holidays, everyone went to see their family and I stayed behind. I even went there once with a friend of mine, and while there his family went to one side and I was left out of the way. It was hard to see people with their families and you don’t know yours, but now it’s easier for me to sympathize with the boys here in a similar situation. It motivates me to stay and help. There are still times, even now, I break down because I know I wasn’t born that way, but I don’t linger and become a prisoner of it because if I wasn’t there , I might not get to where I am today. But, eventually, I understood and accepted that I was going to make the most of my time here,” Coote said.

He told the Sunday Observer that her newfound confidence was further boosted by her daily reading of a sign in the dining room that read, “If you can imagine, you can achieve it.”

“I said, ‘Hey, why not?’ and started to have a more positive attitude,” he said.

From there, Coote hung out a lot in the kitchen and helped a nun – Sister Noreen Gray – who taught her how to cook.

“I started by greasing molds for her to bake, then from there I was taught how to make cakes. Over the years I was taught by the other nuns who have been here. Some of them taught me cooking. I was taught to cook Indian food from a nun who was Indian and also to cook Chinese food from a nun, Sister Carmen,” he said. told.

These experiences will eventually inspire him to become a chef.

“I returned to Kingston, as the sisters ran a school in Laws Street. It was a training center and that’s where I went and learned my other skills. Sister Benedict Chung operated on him and I also learned a lot from her,” he said.

Today Coote, 48, is the restaurant manager at St John Bosco and also the manager of a restaurant, The Falls, which is operated and based in central Hatfield, Manchester.

“When we built the food hall, we were looking to set up a garden for people to go and take pictures. I had someone clear the area and the rocks were nice so we developed that part as well. We have a benefactor named Butch, his brother Eddie Hubert had never given us anything before but I had a feeling it was going to be different this time, and he gave us a generous sum to start the project – 50,000 USD then another $25,000. . We made it a restaurant and it works well,” he said. “We train several children who get decent jobs abroad and on cruise ships.”

Moreover, Coote said that St John Bosco means a lot to him and for this reason he remains loyal to the institution and encourages young people to make the most of the opportunities.

St John Bosco is currently undergoing a renovation of the main building after a donation of US$249,000 from the Digicel Foundation. Sisters of Mercy of Jamaica also paid $60,000 for professional fees related to the renovation project.

The current vocational training program offers certification in various trades, including butchery, catering, animal husbandry, agriculture and greenhouse production, as well as hairdressing. Cosmetology was introduced recently and is offered to both male and female students.

Additionally, the program helps students complete Levels 1-3 for City and Guilds certification and, in some cases, the Caribbean Examination Council (CXC) exams. Coote hopes the expansion of St John Bosco into a co-educational institute will be successful and provide young people with another educational opportunity.