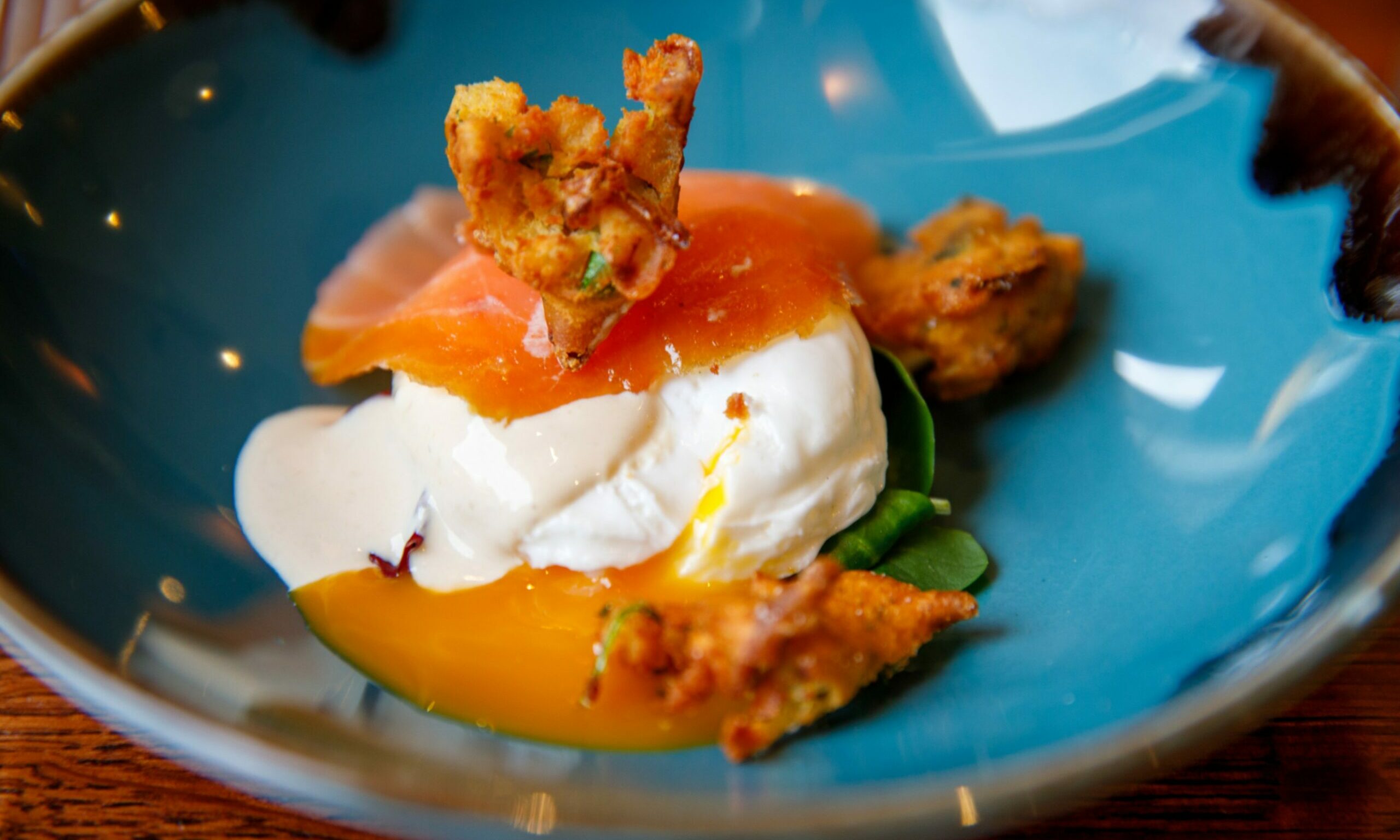 63 Tay Street is one of the few restaurants where everything is perfect and you have no idea the joy of pointing that out as we creep towards the end of a hectic year.

It was interesting, to say the least.

Reviewing restaurants in 2021 has obviously been a more onerous task than before the pandemic due to the current precarious situation in which the hospitality industry finds itself.

The double whammy of Covid-19 and Brexit has dealt mortal blows to a sector heavily dependent on stable activity, disposable income and a workforce often drawn from outside the UK. United. That’s before we got to serious problems in the food supply chain that led to empty shelves and shortages of certain ingredients for consumers and professional chefs.

The Brexit-induced staffing crisis would have been catastrophic even without a global pandemic to compound the scale of the problem. The combination of the two has raised alarm bells for many chefs and restaurant workers, who either decided to leave the industry or were forced to return to their home countries.

This alarm bell rang louder for some who unfortunately witnessed it more like a death knell for their business.

Restaurants that have managed to continue trading are now inevitably open on more limited days and times.

Many still can’t afford to open until a Wednesday, which must be a heartbreaking decision to make. Staffing shortages are just one of many issues currently facing this beleaguered industry, but staffing remains intrinsic to the entire restaurant experience, and we the diners have rightly had to make concessions, including being patient with new, inexperienced staff.

In many cases, it’s not even about having the best staff – it’s about having any staff. This has led to a fundamental shift in what we expect from the service industry, where a good, well-trained kitchen brigade is now the exception rather than the rule.

Our expectations of what we hoped for from the restaurant experience had to be changed.

As we returned from lockdown and once again remembered the thrill of dining out, it seemed like our whole system of judging restaurants would have to change. After all, it would be unfair to consider a small neighborhood restaurant the same as a large London restaurant, even though the holy trinity of food, service and decor can still be paramount to a good night out.

As we went through the year it became clear that some places just aren’t good and some chefs just can’t deal with it – it probably would be, whether we lived in that new world or not.

So when a place like 63 Tay Street shines as the absolute beacon, it really needs to be celebrated for all it offers during very tough trading times.

The first thing to say is that the lunch we had here was a bargain, so much so that I would have gladly paid a lot more.

It’s a bargain for food of this high standard (check their website for times, but this menu is currently served for lunch Thursday-Saturday and dinner Wednesday-Thursday).

I urge you to get there before chef-owner Graham Pallister realizes he’s almost giving away this food right now.

This was my first time here, although 63 Tay Street is not new and has won several awards including Scottish Restaurant of the Year twice and this magazine’s award for restaurant in the year in 2019. Graham himself won Scottish Chef of the Year in 2013.

I’ve never had a bad meal in beautiful Perth and only wish there was enough time to revisit other great places like the North Port (the first restaurant reviewed here after lockdown) and Cardo.

63 Tay Street is now added to the list of places to return to as soon as possible.

The restaurant itself is simple and understated with decor that doesn’t scream for attention. It’s all about the food and the service here, both of which are excellent.

We were greeted by the affable and extremely professional restaurant manager, Christopher Strachan, who explained that there was no written menu and checked that we were happy with the surprise idea. Of course we were!

I love restaurants that offer a very concise menu offering simply good things to eat. One of my favorite restaurants, Clarke’s in Kensington, brought the Californian idea of ​​a weekly no-choice menu to London in 1987 and it became an instant hit.

The idea that the freshest ingredients of the season were served because Sally Clarke chose them as the best things to cook that week was telling in a London food scene fueled by pretentiousness.

Thirty-five years after my first visit, I recently returned to Clarke’s for my first Christmas lunch of 2021 and it still operates with the same ethos, although now giving customers a choice.

It reminded me of Clarke’s when the set menu items started appearing at 63 Tay Street, where the ethos is ‘Local’. Honest. Simple.” While I think those words sum up much of what’s on offer here, they also don’t give an indication of the brilliance of Graham Pallister’s cooking.

Everything I ate was delicious, starting with the Super Butternut Squash Soup with Black Garlic and Parmesan Cream with Pine Nut Relish.

I don’t often order soup in restaurants as sometimes it can take the appetite away but here the nectar on offer was absolutely perfect – as intense a combination of flavors as one could wish for and both an illustration that you are here in the hands of a master.

The next dish of Gloagburn poached egg, smoked salmon, cauliflower butter and onion bhaji was equally divine, made all the more enticing by the surprise of the bhaji.

The smoked beef shoulder steak was my favourite, the tenderness of the meat perfectly complemented by the shio koji pearl barley, allotment onion (Graham grows stuff down the road on Moncreiffe Island) and a horseradish gel. An absolute master class in beef cooking and a pleasure to eat.

The meal ended with a warm almond financier, poached garden pears from Ailsa and chocolate ice cream – as harmonious and wonderful as the dishes that had preceded it.

I had eaten four courses of exceptional food and, exceptionally, David too.

Regular readers will know that the fact that vegetarians and vegans are so unwelcome in this part of Scotland has become one of our bugbears.

This is confirmed by the correspondence I receive whenever I report it – vegetarians are so bored of being offered bland dishes like generic gnocchi, now as much a restaurant cliché as a nut roast.

Here it’s a whole different story in that David received four dishes as brilliant as mine (the restaurant makes a point of asking customers to let them know of any dietary requests in advance so that they can prepare).

While some of my exemplary dishes were reflected on the vegetarian menu (soup and dessert were the same), David’s poached egg came with lentil curry and this carnivore must say it was just as delicious as my smoked salmon dish.

David’s main course, an onion and pepper pie, came with the same fermented barley as my beef, but was also enhanced with roasted cauliflower and a delicious apple miso yogurt. It was a real delight and I would be very, very happy to eat it
any day.

Finally, here is someone who thinks about vegetarian food as much as his main menu. Top stuff.

It should be noted here that chef-patron Graham was the only person cooking in his kitchen the day we visited and yet the food arrived without issue.

The service was excellent – friendly, knowledgeable, and proud of what they offer, as it should be, because this place has it all.

63 Tay Street is such a delight.

When I visit restaurants as regularly as I do, it’s sometimes frustrating because there’s often something wrong that could easily be fixed.

Here, there is nothing to improve, except perhaps to bring it closer to my home.

Normally the cost of such perfection is reflected in the price, which is obviously quite fair – it costs money to open your doors and offer food and service.

Here at 63 Tay Street it is a joy to have food of this quality at a price well below what might be charged.

Graham Pallister is to be commended for doing this at a time when many, many others are raising their prices to reflect rising costs.

As 2021 draws to a close, it’s wonderful to find a place like 63 Tay Street where there are no ifs or buts – it’s just awesome.