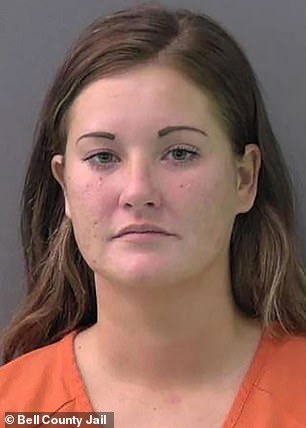 Amanda Martinez, 31, has been charged with assault causing bodily harm for allegedly throwing menudo soup in the face of restaurant manager Jannelle Broland

A customer accused of throwing hot soup in the face of a restaurant manager was arrested and charged with assault on Wednesday.

Amanda Martinez, 31, was taken to Bell County Jail after a warrant was issued for her arrest.

Martinez was charged with assault causing bodily harm and is currently being held on $5,000 bond.

Broland, 24, was doused in soup after Martinez angrily confronted her, claiming it was so hot the plastic lid had melted in it.

Broland said the soup, which was still hot, “felt like it had been doused in pepper spray” and caused his eyes to burn and his nose to bleed.

By the time police arrived at the scene, Martinez and a male companion who witnessed the altercation had already left. She has since been banned from the restaurant.

Broland said KCEN News that she felt conflicted after hearing the news of Martinez’s arrest, but ultimately felt happy that Martinez was being prosecuted.

“When I last spoke with the TPD (Temple Police Department), it looked like this process would take a lot longer. I’m not sure how I feel about being the one to put someone in jail. But I’m happy to see that she’s facing the consequences of her actions,’ she told the outlet. 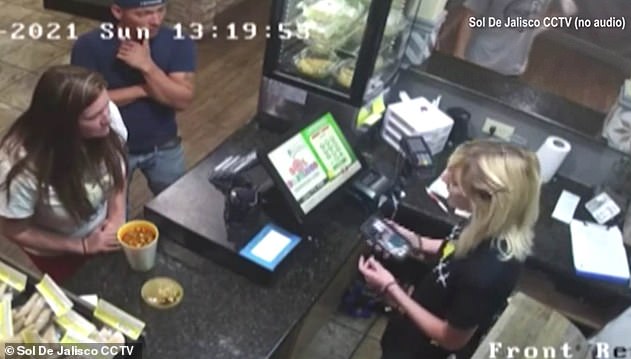 Sol de Jalisco manager Jannelle Broland (right) can be seen reasoning with the woman, who takes the lid off the container of soup and points to it while going back and forth 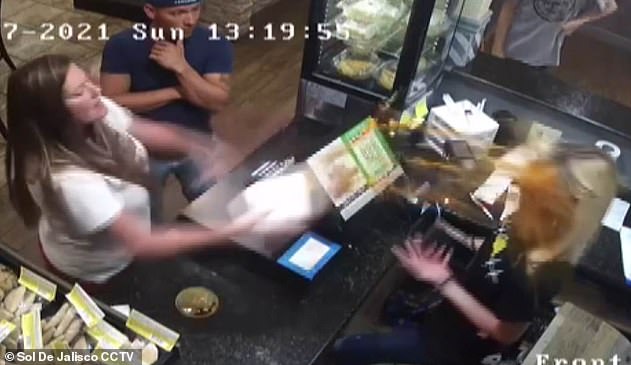 Martinez allegedly threw the soup at Broland, grabbed his male companion and ran for the door 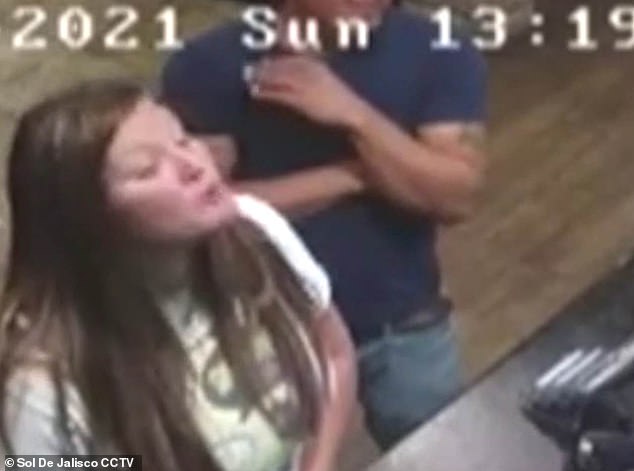 Broland, 24, was doused in soup after Martinez angrily confronted her, claiming it was so hot the plastic lid had melted into it.

“We do not condone this type of behavior and hold the highest standards for our citizens,” Deputy Police Chief Allen Teston had said when the Temple Police Department opened the investigation.

Prior to the incident, Broland had received a call from Martinez complaining that the soup was too hot.

Broland then responded by saying she was “so sorry” and even offered a refund.

“Every time I mentioned a refund or a free replacement meal she would cut me off and keep saying ‘That’s f****** ridiculous’ or ‘Look at that s***’, Broland told DailyMail.com “She didn’t look like she wanted anything, just to berate me.”

Martinez then returned to the restaurant later that day where she had a face-to-face confrontation with Broland.

“I pulled out my phone and that’s when I said, ‘If you don’t leave or calm down, I’m going to call the police,'” Broland said in a Tik Tok video. 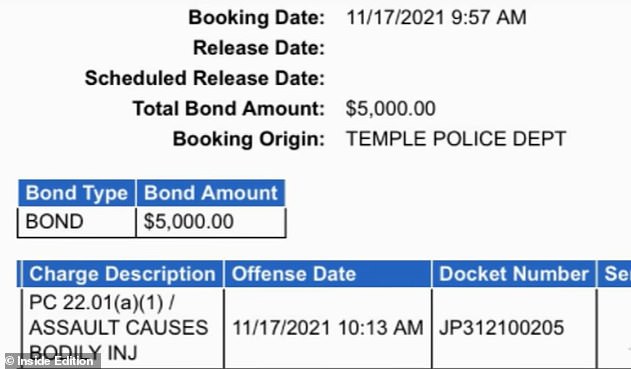 Martinez has since been charged with assault causing bodily harm and is currently being held on $5,000 bail at the Bell County Jail.

The angry customer then abruptly threw the soup at Broland, grabbed her male companion and rushed for the door, the video showed.

Broland said the soup, which was still hot, “looked like it had been pepper sprayed” but that she had not been seriously injured as a result.

“The experience itself was traumatic and heartbreaking,” Broland told DailyMail.com. ‘[I] I felt my spirit was shattered just knowing that someone could do something so horrible and then laugh about it.

As she was incapacitated, wiping the “very spicy” soup from her eyes and nose and sliding on the soup-covered tiles below her, restaurant patrons took action.

“By the time I walked out there were already people registering their faces and license plates,” she said, referring to the woman and her companion.

Shortly after, the police arrived and Broland filed a complaint. 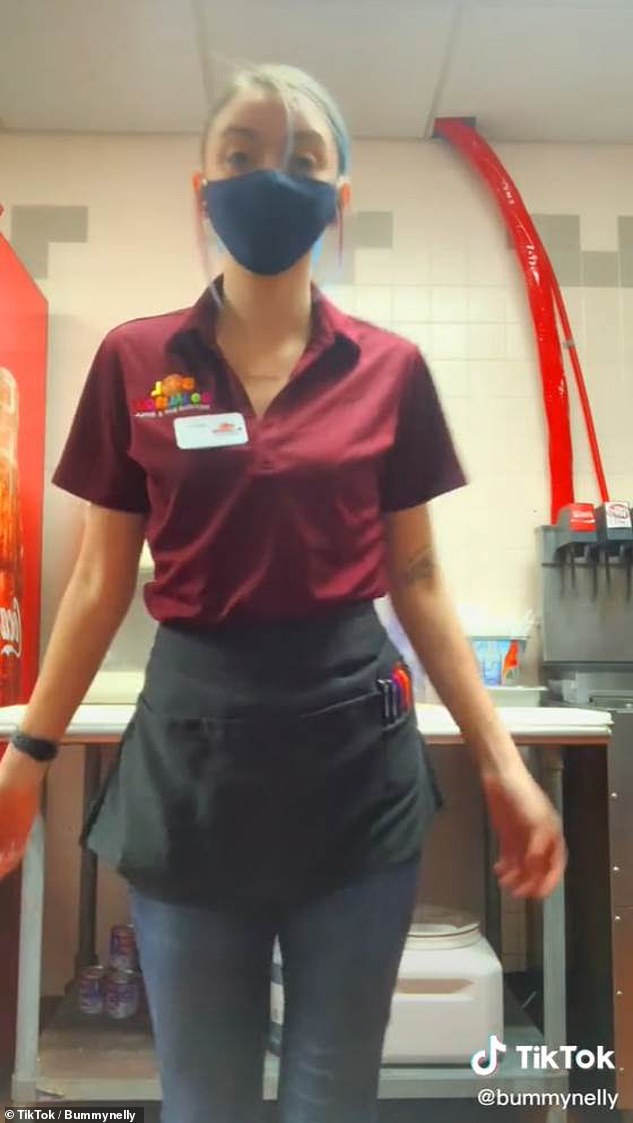 “The last time I spoke with TPD, it looked like this process would take a lot longer. I’m not sure how I feel about being the one to put someone in jail. But I’m glad to see she’s facing the consequences of her actions,’ Broland said after Martinez’s arrest.

“I was in shock, I ran to the bathroom. I was just crying and this really nice woman was wiping me down with paper towels and wiping my face and my hair and being so, so nice. One of my coworkers said took off his work shirt, put on his hoodie and gave me his work shirt.

Broland was heartened not only by the support of her small community and the restaurant’s close-knit staff, but also by the overwhelming sympathy she saw when the video went viral after her colleague shared the footage on social media. .

“I really expected it to go viral locally,” she told DailyMail.com. “I have a lot of friends in the restaurant industry, so I knew they would identify with that, or at least understand my frustration. Little did I know that I would be contacted by the media and the images would be shared thousands of times.

Martinez has been charged with a Class A misdemeanor, and if convicted of assault causing bodily harm, she faces up to a year in jail and a fine of up to $4,000, according to the Texas Penal Code. 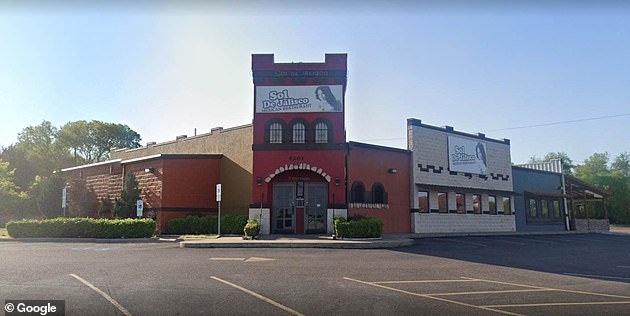 The incident happened at the Sol de Jalisco restaurant in Temple, Texas (pictured). Martinez allegedly confronted Broland, claiming the soup was so hot the plastic lid melted in it