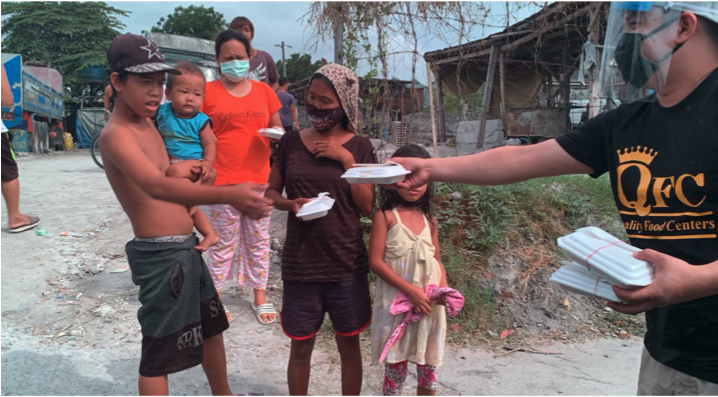 An Edmonds grocery store manager has raised more than $5,500 for children in need in the Philippines this year and hopes to continue his charity work in the months to come.

Jeff Orate is the front-end manager at Edmonds QFC in the Westgate area of ​​the city. He grew up in Edmonds, but his family is from the Philippines, which motivated him to take a trip there from 2012 to 2017. During his five years in the country, he met his wife Karen and had two daughters, all of whom are still alive. the.

He also became aware of the number of children living in poverty in the Philippines. Upon returning to Edmonds, he was inspired to start doing charity work – saving money to eventually spend on helping children he met. He started by donating school supplies to 70 children.

Orate is saving money on each of his QFC paychecks, setting aside $100-150 a week for when he can return to the Philippines and give back. By Thanksgiving that year, he had raised enough money for 1,500 toys.

“These children, I saw them eating in the street and I saw them picking up toys from garbage cans. So giving just a little of what I have reminds these kids that for at least a day they are children,” Orate said.

At the height of the pandemic from 2020 to 2021, Orate spent an entire year in the Philippines. He was mainly helping a community of around 200 families who had suffered a devastating flood. Orate was able to reach 120 of them and provided them with clothing, food and support.

Many of Orate’s friends volunteer for his cause and his family has also been involved in his charity work. When he talks about seeing his children help him with his volunteer work, Orate gets emotional.

“I want to leave a legacy for my children,” Orate said.

Orate also owns three restaurants in the Philippines while his wife Karen owns three salons and is also a nurse. According to Orate, he operates the restaurants primarily as a way to create jobs for the community.

“I don’t make a lot of money from restaurants, but it’s a way for me to provide jobs for people in the area,” Orate said.

Here at Edmonds and abroad, Orate is dedicated to making life better. He is passionate about his career at QFC and has forged strong bonds with the regulars. He tries to cheer them up in every way possible, especially the older customers.

“Not everyone has someone to talk to. Especially the older community – they just come to QFC to talk. And I’m here, my ears are open and I’m here to give them advice,” Orate said.

Orate tries to make a trip to the Philippines at least once a year and plans to return in March for an extended stay of six months to a year. He hopes to double the amount of toys he donates in time for Thanksgiving.

When asked where he learned this generosity, Orate cites his parents and the motto they instilled in him:

“Give what you can and take what you need… The more people you reach, the better off you are.

Contact Jeff at [email protected] to learn more about how you can help, or visit him at Edmonds QFC at 22828 100th Ave W.