Country Waffles in the Midway (after 9 years) 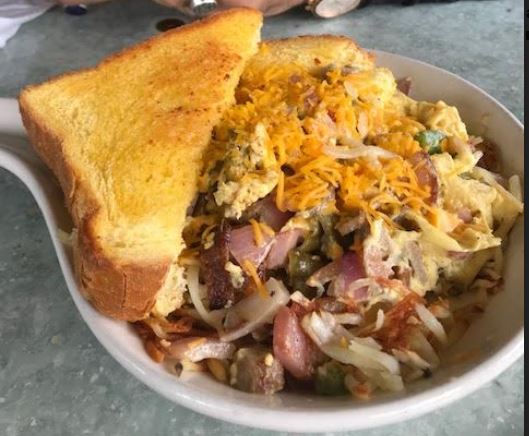 Country Waffles in the Midway (after 9 years)

It’s hard to find a time that works for a restaurant owner and myself to have breakfast, but Ibrahim (Al) and I seem to enjoy our time together so much that we try to meet at least once a month to discussing his new book, or his new painting, or his new poetry, etc. Yes, I’m talking about the owner of Fairouz restaurant.

Our original plan was to go to Perry’s for breakfast, but when we arrived around 9:30 on Saturday morning, there was no parking space to be found. (And if you know Perry’s, you know there are basically two lots and plenty of parking space.) We decided not to wait and went to the Peasant Waffles restaurant, a place we had been to before, but not together.

The parking lot was nearly empty – quite a contrast to Perry’s – and we had no trouble getting seated immediately. The menu hasn’t changed much over the years, and I had a hard time deciding because there were so many dishes I liked to try. Al also struggled a bit with his decision, and he was very hungry so wanted something substantial.

He opted for “The Hangover” – 3 scrambled eggs with ham, bacon, sausage, onions, mushrooms, Ortega pepper, tomatoes and peppers. It was piled on hash browns and topped with cheddar cheese. It was served with a thick slice of cheese toast and cost $15.75. If he wanted to have it “smothered in sauce” there was an additional cost of $1.60. And if he wanted to replace the cheese toast with a pancake or a waffle, there was an additional cost of $3.95.

I opted for the garden omelet – It included 3 eggs, zucchini, spinach, mushrooms, peppers, mushrooms and cheddar cheese. The cost was $10.65. It came with my choice of 1//2 waffles, pancakes, toast or cookies. I chose sourdough toast. I also asked for my hash browns to be crispy.

Our server took our order and Al mentioned he needed more training. He was brusque, full of himself, and didn’t really listen to the questions Al had for him. He didn’t seem like a new employee, as there was only one other server, but he was unfriendly.

When our order was delivered, the first thing I noticed was that the toast was ‘buttery’ – but randomly. Much of it was dry and in the long run I didn’t eat much of it. The omelet was good but only a few hash browns were crispy. Most of them tasted raw, and I left most of them too.

Al was very disappointed with his meal. He said it was “uncooked”. His potatoes tasted raw; the meats were not hot; and everything seemed unfinished. I never went out to eat with him where he left food. This was not the case here. He left more than half. It was funny to note that he was asked if he wanted more coffee and he said ‘no’. And then his coffee cup was filled.

I hope it was just a glitch in the service that day. When my kids were little we used to go there all the time as there was always plenty of choice and the food – and service – was good. I doubt Al or I will be back soon. And I want to reiterate that my omelet was tasty and filled with the items listed on the menu. But putting everything else together, both meals were disappointing.

[Editordude: It’s been 9 years, apparently, that Judi manged to stay away from this restaurant. The Widder Curry did an earlier review almost exactly nine years ago. Check it out here.]