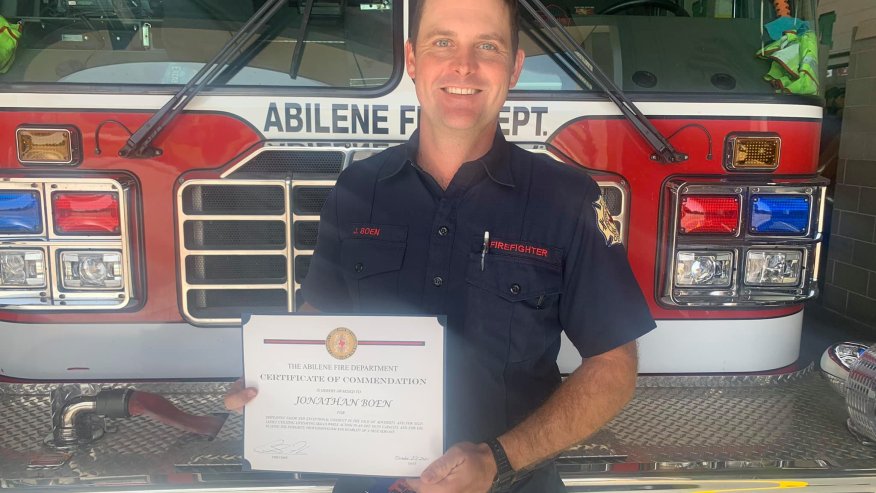 “We were short on busboys that night so I was filling the tables in the next room. When I turned around, I noticed an elderly couple and it looked like the old man was giving the woman the Heimlich,” says Gilbert Torres, assistant manager of Texas Roadhouse.

Torres was once a firefighter. He says all of his training started coming back to him at that point as he rushed to help the woman.

“I immediately threw the tub off the bus and started giving her the Heimlich. At that point she passed out, her body went limp,” Torres recalled.

With the weight of a human life in his hands, Torres says he kept a brave face, trying not to cause panic.

Across the room, off-duty Abilene firefighter Johnathan Boen got up and rushed to help. He asked Torres to administer CPR.

They worked together to prevent the woman’s condition from worsening.

“I think it was like literally the 33rd chest compression when she came to, and I just remember thinking, ‘Oh, thank God,'” Torres said.

Torres recalls seeing the woman’s husband hold her hand through it all, worried and stressed as they tried to save his wife.

She passed out once again, but was revived by Boen. Abilene Fire Chief Cande Flores said the two men’s quick action saved his life that night.

“Our guys were going to be there pretty quickly, but every moment counts when it comes to someone not breathing,” Chief Flores said. “We are certain that his interactions saved a life.”

Torres says that before leaving for the hospital with his wife, the man tried to pay their bill. He told them it was covered and the man gave him a $100 bill to give to their waitress in gratitude.

“If that was my grandma on the floor right there, I’d do everything in my power to make sure she gets out of this alive, and I just think, ‘You know, that’s the big one. – someone else’s mother. I have to bring this lady back to her family,” Torres said.

Although Boen left before Torres could speak to him, he says a free meal awaits him the next time he walks through those doors.

Boen was recognized by AFD for his quick and decisive actions that night.

We reached out to Boen for a comment, but he declined, saying he didn’t want to draw attention.