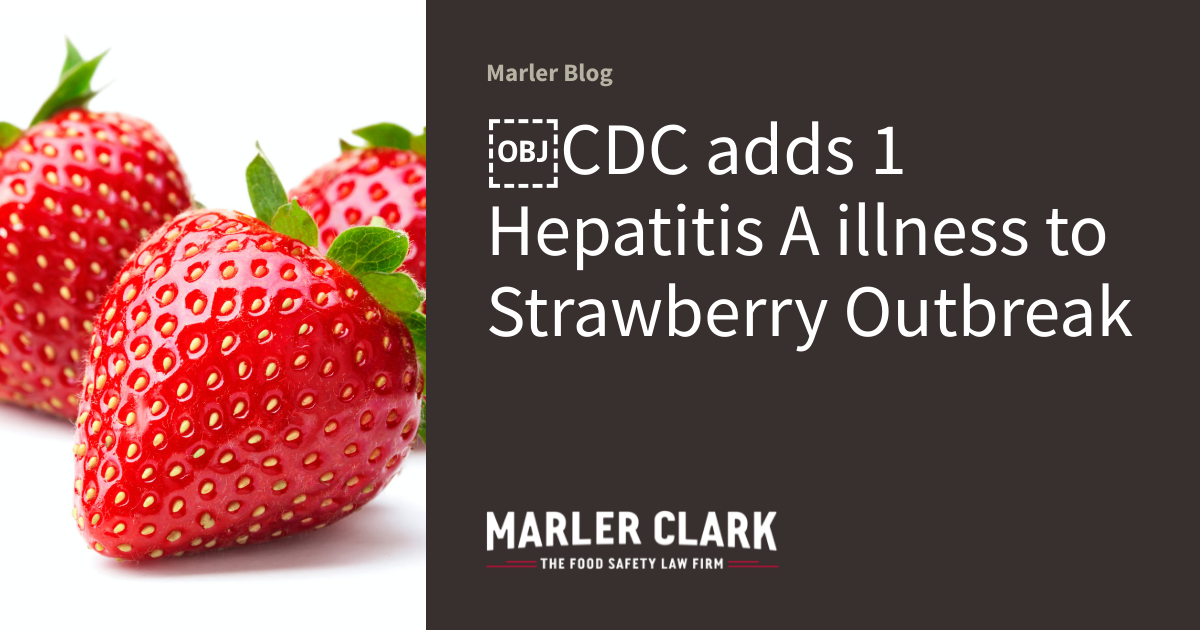 Of 28 people with hepatitis A in the United States and Canada, 17 were hospitalized.

We Filed the First Hepatitis A Complaint – ArthurBrown – Complaint 6.2.22 Final WDM – To Be Filed

Epidemiological and traceback evidence points to fresh organic strawberries, imported from Baja California, Mexico, as the likely source of this outbreak. The potentially affected FreshKampo and HEB products have exceeded their shelf life and are no longer available for purchase in the United States. People who purchased FreshKampo or HEB fresh organic strawberries between March 5, 2022 and April 15, 2022 and then froze those strawberries for later consumption should not eat them. These products may have been sold at the following retailers, including but not limited to: HEB, Kroger, Safeway, Sprouts Farmers Market, Trader Joe’s, Walmart, Weis Markets and WinCo Foods. A downstream recall from a company that may have used strawberries linked to this outbreak to manufacture product has been initiated. The recall concerns Urban Remedy Organic Revitalizing Tea Tonic Strawberry Hibiscus Rose. People should not drink the recalled tea.

In Canada, as of June 2, 2022, 10 laboratory-confirmed cases of hepatitis A were under investigation in two provinces: Alberta (4) and Saskatchewan (6). The people fell ill between early and mid-April 2022. The people who fell ill are between the ages of 10 and 75. Four people were hospitalized. No deaths have been reported.

The CFIA is conducting a food safety investigation of FreshKampo brand organic fresh strawberries purchased between March 5 and March 9, 2022 from Co-op stores in Alberta and Saskatchewan. Currently, there are no food recall warnings associated with this outbreak.

The US CDC and FDA are also investigating an outbreak of hepatitis A infections potentially linked to fresh organic strawberries. Investigators in Canada and the United States continue to collaborate to exchange information and identify commonalities in outbreak information that could identify additional sources of illness or help identify the cause of contamination of fresh organic strawberries.

Hepatitis A: Marler Clark, Food Safety Law Firmis the nation’s leading law firm representing victims of Hepatitis A epidemics. The Hepatitis A lawyers from Marler Clark represented thousands of victims of Hepatitis A and other foodborne illness outbreaks and have recovered over $800 million for customers. Marler Clark is the only law firm in the nation whose practice focuses exclusively on foodborne illness litigation. Our Hepatitis A lawyers pleaded Hepatitis A cases from outbreaks from various sources, such as green onions, lettuce and restaurant foods. The law firm brought Hepatitis A lawsuits against companies such as Costco, Subway, McDonald’s, Red Robin, Chipotle, Quiznos and Carl’s Jr. We proudly represented the family of Donald Rockwelldied after consuming Hepatitis A spoiled food and Richard Millerwho needed a liver transplant after eating at a Chi-Chi restaurant.

If you or a member of your family become ill from a Hepatitis A infection after consuming food and want to take legal action, contact the Marler Clark Hepatitis A lawyers for a free case assessment.