Can the United States Reduce Inflation by Breaking Supply Chains? 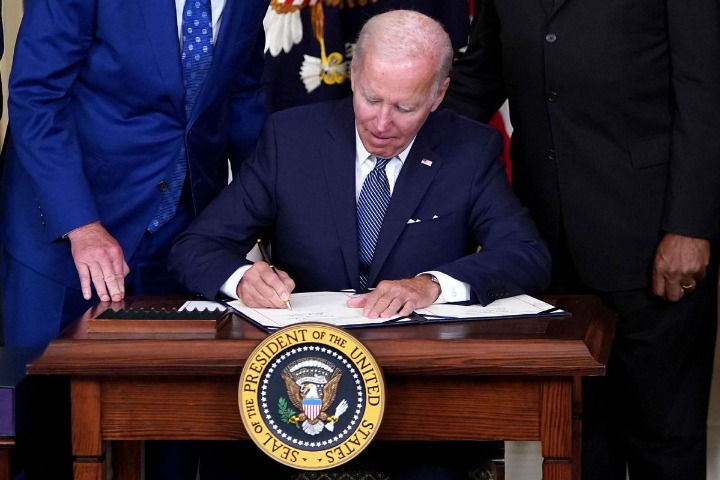 Can the United States Reduce Inflation by Breaking Supply Chains?

On August 16, US President Joe Biden signed into law the Cut Inflation Act of 2022, which would invest $369 billion in clean energy to reduce emissions and fight climate change, $64 billion in dollars would be spent under the Affordable Care Act to reduce health insurance costs, and a corporation tax of at least 15% would be imposed on companies earning more than $1 billion a year.

The legislation requires total investments of $437 billion and is expected to yield $737 billion, reducing the deficit by $300 billion.

Under the pretext of fighting inflation, the White House promises to “lower costs for families, fight the climate crisis, reduce the deficit, and finally ask the biggest companies to pay their fair share”. But the IRA won’t directly tackle many of the causes of soaring prices for goods and services, from gas and food to restaurant meals and rents, even if the Consumer Price Index is still down. its highest level in four decades.

In fact, the nonpartisan Congressional Budget Office said the changes will have a “negligible” impact on inflation this year or next. This makes the IRA a scaled-down version of the “Build Back Better Act” proposed by the Biden administration in 2021.

The IRA, in effect, is a climate bill. The $369 billion investment is tied to “climate change and energy security,” including tax and other incentives to promote the production of electric vehicles and critical minerals, and develop renewable energy technologies, and therefore represents “the largest investment in climate and energy in the United States”. the story”.

These provisions aim to put the United States on a path to an approximately 40% reduction in emissions by 2030, but they also reflect economic and geopolitical goals, including a desire to reduce “U.S. dependence towards China, ensuring that the transition to a clean economy creates millions of American manufacturing jobs and is fueled by clean technologies made in the United States”. This means that the bill targets China.

Increasing battery production in the United States is at the heart of the IRA. Nickel, cobalt and lithium are the main metals used in high performance batteries. But the United States is not a big producer of any of these metals, and countries that produce these metals in bulk do not generally manufacture battery components or batteries. A good example is Chile, which produces 25% of the world’s lithium, but no appreciable amount of batteries.

China has been the world’s largest market for new energy vehicles for seven consecutive years and an important link in the global battery supply chain. Battery metals are mostly sourced from China or from companies with strong ties to China. And Chinese battery makers including CATL and BYD account for about half of the global market share.

If American automakers and their allies such as European countries, Japan and the Republic of Korea and their companies, including Tesla, BMW, Toyota, Kia and Hyundai, cut their ties with Chinese suppliers, they would have to spend a lot more on purchasing and delivery, as a large percentage of the materials used in batteries manufactured by ROK companies come from China. This is why the Republic of Korea is using all possible diplomatic and commercial channels to seek an exemption from the IRA. And if he fails, he could seek redress from the World Trade Organization, because the IRA violates the principles of non-discrimination against most favored nations.

Industry watchers say the U.S. legislation, which follows the passage of the CHIPS and Science Act, shows Washington feels “intimidated” by China’s growing technological prowess and denounces its own incompetence in maintaining the supremacy of electric vehicle technology. That said, the United States still relies heavily on Chinese manufactured goods for clean energy.

Biden has repeatedly targeted China in his speeches, saying the United States wants to catch up with China in new energy. It seems that the only consensus between Democrats and Republicans is to control China’s technological rise. The IRA makes it very clear that the real intention of the United States is to control the progress of China’s new energy sector. Prior to that, the United States had already created obstacles for Chinese solar panel makers in the Xinjiang Uyghur Autonomous Region by accusing them of using “forced labor”.

The author is a research assistant at the Institute of American Studies of the Chinese Academy of Social Sciences. Opinions do not necessarily reflect those of China Daily.