Beirut to Dundee is a hidden gem

Beirut to Dundee is a hidden gem

The connection between art and food is recurrent through the ages, and at its most basic level, I still believe that if you want to find a good restaurant, you could do a lot worse than ask an artist.

It is normally true that artists have an instinctive and aesthetically based appreciation of food that might even influence their own artistic practice.

Artists Gilbert and George are famous for never cooking a meal in their own home, instead finding a restaurant they like and going there for years, often several times a day. They even order the same dish, thinking that eliminating choice from their daily lives frees them to create.

While Gilbert and George tend not to go to trendy restaurants, many artists congregate in the same spaces. In London you will always find St John filled with a creative gang and when that same crowd travels to Edinburgh they gravitate towards places like Timberyard, the Little Chartroom or Aurora in Leith.

Dundee doesn’t have a place so blatantly artsy, apart from Jute at DCA which always draws a directional crowd and feels buzzy and outward looking. Other places that pass through Dundee’s art tribes include Gallery 48 and Rama Thai, both of which operate at reasonable prices, meaning you don’t need to sell your first masterpiece to be able to go there. eat.

A weekend lunch at Rama Thai proved just how successful it has been in attracting such a diverse clientele, including a particularly young contingent who enjoy the £9.95 three-course lunch menu as much as we do.

However, it is probably true to say that Perth Road in Dundee has the greatest variety of interesting places to eat on any street in the city – which is fortuitous as this is where the award-winning art school of Dundee.

A recent meeting with Anita Taylor, Duncan Dean of Jordanstone College of Art & Design (DJCAD), proved not only intellectually stimulating, but also led to the discovery of a perfectly formed little gem of a restaurant across the street. from college.

It’s a short walk from the city center and I highly recommend trying it out soon as it’s a real find.

Beirut is what I had been looking for in Dundee for a long time and was so thrilled to find it that I ended up eating there three times in the same week. It really is so good.

Opened less than a year ago by Saif Shakarchi, Beirut is a simple, unassuming space that punches way above its weight in the food it delivers. It is the authentic medium

Oriental cuisine that is fresh, vibrant and a total delight.

This weekend would be a great time to try the food here, as DJCAD’s fantastic graduation show opens today and runs until May 29. This will be the first in-person graduation show from the faculties of art, design and architecture, celebrating the achievements of more than 350 students. I’ve bought some great work from this show over the years and it’s wonderful to see it return after two years online.

I would recommend a day of art starting with Douglas Gordon’s fantastic show at DCA, then a visit to the DJCAD diploma show (reservation required), interspersed with a meal in Beirut.

Whenever people ask me about my favorite cuisine, I always have a hard time answering because it all depends on variables like the time of year, time of day, and your mood.

But the food categorized as Middle Eastern covers the cuisine of so many countries that this encompassing term includes so many things that really excites me.
about food.

There is a freshness and vibrancy to these dishes that cannot fail to excite and the use of herbs and spices so synonymous with much of this cuisine elevates it into another realm.

The menu here is short but everything I tried over three visits was delicious. It is made up of six cold mezes, six hot mezes, four wraps and nine main dishes. A special evening offers 12 mixed meze and meshwi for £21.95 pp which seems like a pretty good deal for such quality food. It’s unlicensed but you can bring your own alcohol.

A basic test of a place like this is the freshness of everything, as many of these dishes certainly don’t benefit from sitting.

A bowl of tabbouleh (£5.95) was so wonderfully seasoned that I could have eaten it three times and still wanted more.

It’s a dish that smells so sunny that eating it has brought this part of the Perth route so close to the Levant. Indeed, a photo I took that day shows a dish brilliant with color, the deep red of the tomatoes enhancing the vibrant green of the parsley, like little jewels dotting the bowl. A twisted piece of lemon on top was a perfect visual counterpoint to the green and red beauty, and the lettuce leaves were both ultra-fresh and, as tradition dictates, used as balls for the joyful blend of flavor resonating below.

By the way, I was recently interested to find a new tabbûleh recipe in Sally Butcher’s excellent book Veggiestan. This version, which is meant to be definitive, uses both cinnamon and baharat, a blend of seven spices used in a wide range of dishes, including in Syria and Iraq – also the birthplace of Beirut chef-owner Saif.

I can’t wait to try this version at home, and also notes in the book that “the real tabbûleh is a parsley salad with extra wheat”.

I would recommend anything on this menu, although the star of the show for me is probably the hummus chicken shawarma (£7.50), a dish of such joy I’m still craving it even as I type this . Served simply, with a pickle and a little lemon for balance, this dish was so good that I had another portion, plus the equivalent of the lamb (£7.95) to take home for the dinner that night.

It’s important to state that everything is homemade here and so the hummus either succeeds or fails on the balance of flavors within – here the tahini was just right, not cloying or pungent as it can be in lesser versions judged, and every bite was such a perfect enhancement to the spicy chicken that I gobbled it down within minutes.

Another huge hit came a few days later when I was doing weights at the gym and needed to get healthy, low-fat, high-protein bulk into my body fast. This came in the form of the most perfectly light falafel you’ve ever tasted (£7.95, but that’s for a large platter).

Here, seven fluffy falafels with intense flavors are served with a high quality spicy house sauce, a perfectly balanced tahini sauce, salad, pickles, a hot flatbread and a serving of golden rice with turmeric sprinkled with parsley. It was freshness on a plate and it was so delicious – the falafels were definitely the best I have ever tasted in my long life.

By now you’ve probably realized that I love this place, so a third visit to try the halloumi (£5.95) was really just to celebrate the joy of this simple, fantastic food and to see how halloumi, so often cooked and presented so that it
looks like rubber putty, could be transformed here.

Needless to say it was great, the salty and relatively low calorie cheese perfectly cooked and served like crispy golden nuggets. With pickles to cut through the richness of the cheese and an amazing homemade chili sauce to go with it, it was another delight.

I also note in Veggiestan a quote from Sidqui Effendi about halloumi who advises to “put a portion of cheese in silver paper. Wrap it up and put it on a fire. When the paper starts to shine, the cheese is ready to eat and deliciously creamy…it’s good sex-enhancing food for married men.” Really, who knew halloumi had such power?

Dundee has quite a few Middle Eastern restaurants, most of them quite good. But what was missing was a place that was laid back enough to drop in, but authentic enough to feel like you were indulging.

I happened to go there the first three times on my own because it’s the kind of food I like to eat on a whim, and it’s perfect for a quick lunch when I don’t want to not always book and don’t always want the faff of a restaurant experience.

Sure, Beirut is indeed a restaurant, but it has a laid-back vibe that feels relaxed enough to pop into any time of the day.

Every time I’ve been there has been a procession of students across the road, as well as locals who have turned to this gem before me. It sounds a bit like a secret you want to keep.

The decor is simple, a little quietly bonkers (a skateboard, guitar, radio, depiction of an old-fashioned TV, and a sign that says “good vibes only” adorn one wall) and the whole place looks like it is – a room to celebrate good home cooking.

Its proximity to the school of fine arts already seems to have attracted a loyal following of students and professors, but Beirut deserves to have a much wider audience.
audience than that, because it is
a real find.

This weekend, the area around Beirut will be bustling with the activity of the graduation show, a truly special moment in Dundee’s vibrant cultural life. I’m delighted you can now enjoy equally vibrant and authentic cuisine just steps away from the city’s brilliant art school.

Kudos to Saif Shakarchi for delivering his authentic vision with such skill and aplomb.

[Beirut in Dundee is a hidden gem] 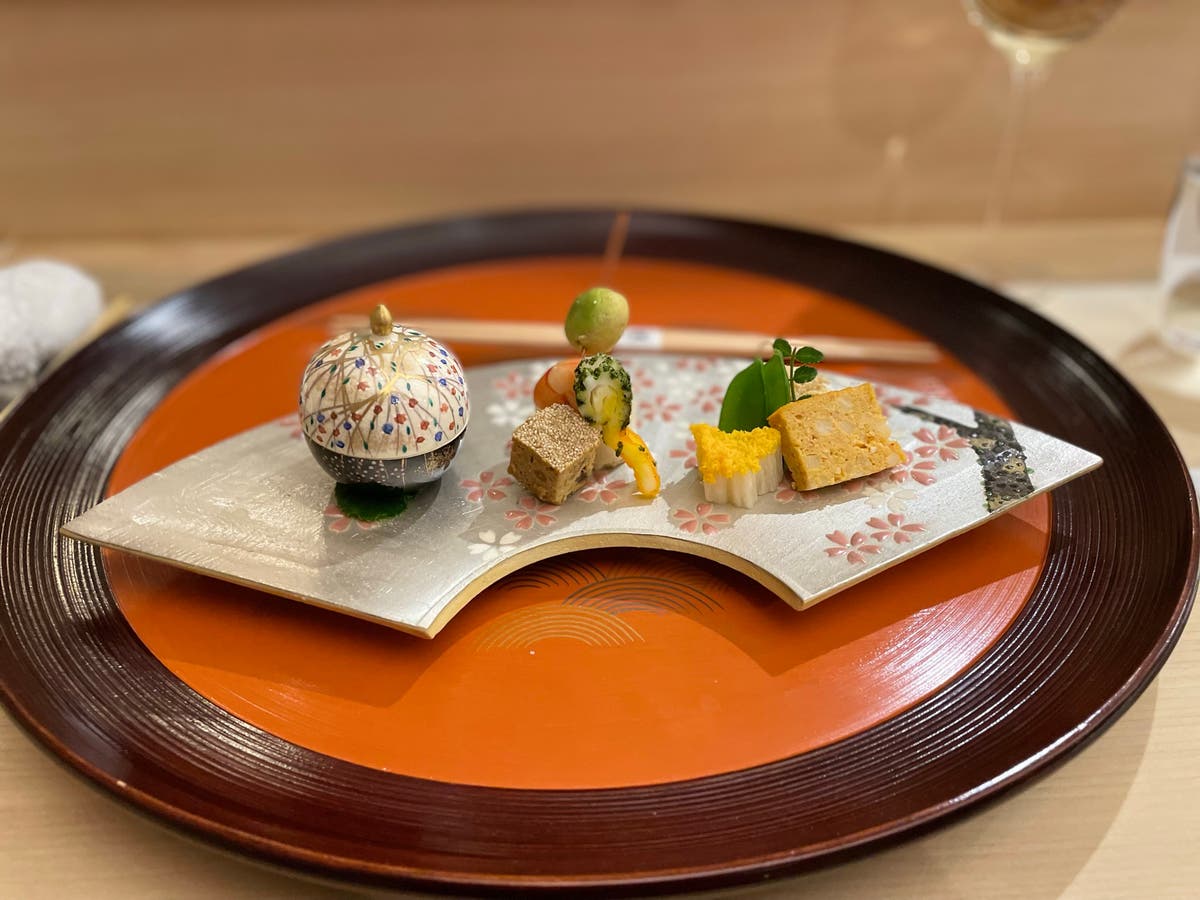