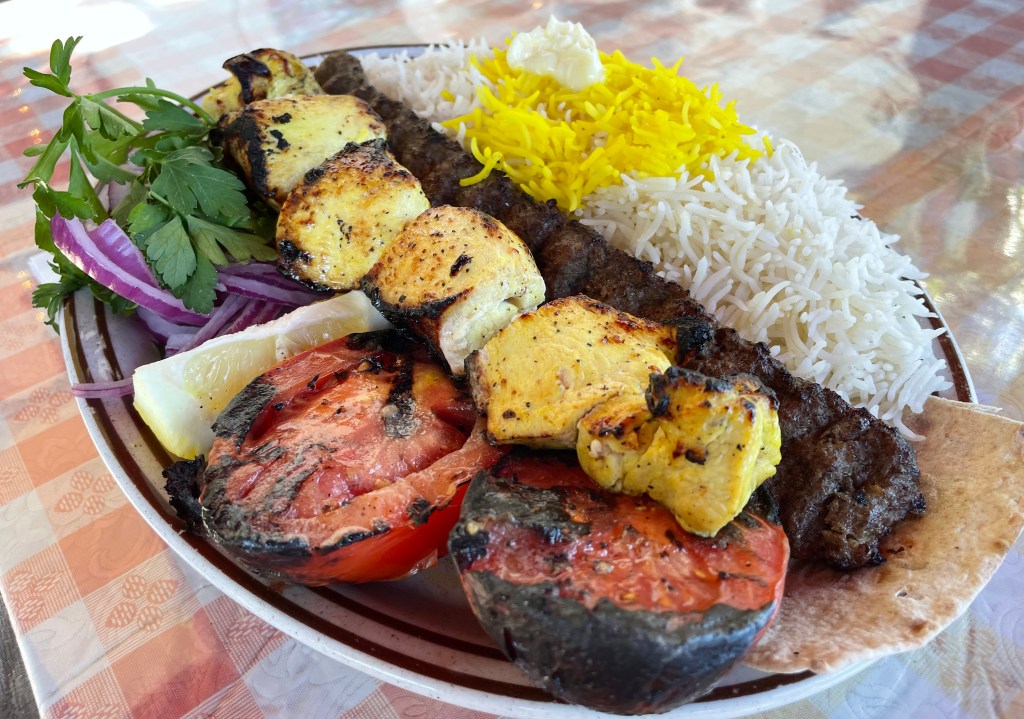 When George Lucas made “American Graffiti” in the early 1970s, he originally wanted to shoot the film in San Rafael. After a night of filming, San Rafael called off their arrangement with Lucas.

In the film, teenagers drove around in their cars from one drive-in to another, trying to cram in as much as possible during their summers. It didn’t matter what or if they ate.

Now Fourth Street in San Rafael is a row of restaurants. And food matters. No car is needed to wander down the street stopping here and there to check the menus. With the added parklets, there is an international cafe vibe on the street in San Rafael. And this is certainly reflected in the variety of cuisines on offer.

In the first steps of the 800 block of the Fourth there are Indians, Haitians, Thais, a new place opening up where Theresa & Johnny’s used to be and a tiny place with a mustard colored facade named Wrap N Kabob. You could eat in a different “country” every night of the week.

Wrap N Kabob offers a simple menu with Persian influences and flavors you may never have tasted.

Order at the counter, then find a spot indoors or outdoors, where the park’s picnic tables are surrounded by lush succulents.

The traditional hummus ($5.99), a mashed chickpea, was a thick, rich and creamy starter. It was sprinkled with tangy ground sumac, flavored with lemon and mashed with roasted garlic. There are so many styles of hummus across the Middle East and now in every grocery store and deli in the United States. This was delicious scooped up with the small squares of lavash, the flatbread served with all entrees.

The dolmeh ($4.99), eight braised rice and herb-filled grape leaves, was the perfect size for two bites, but I wish a lemon squeezed on it.

Our favorite appetizer was the Kashk e Bademjan ($5.99). This Persian version of a roasted and mashed eggplant dip was served warm and topped with kashk, a cream made from the whey left over from cheese making. (My friend said it smelled a little like blue cheese.) It tastes appealing and tart like sourdough. Walnuts and golden strings of fried onions add more flavor to this often-savored dip. Kelvan Kimiyaie, owner and two-person operation of Wrap N Kabob, shared that it was his mother’s recipe. I imagine he grew up eating well.

Among the skewer plates, ($14.99-$18.99), the special two-starter combination ($18.99) arrived with a pile of fluffy long-grain rice with a yellow turmeric crown and a walnut. butter to unwrap and let melt in the rice. It featured grilled Koobideh, skewers of juicy ground beef tossed with chopped onion and garlic, and spiced with turmeric and sumac, and a separate skewer of marinated chicken breast. A grilled tomato, raw slices of sweet red onion, parsley and slices of lemon complete the attractive presentation. My friend from Iran says these skewers are typical street food and always more delicious than skewers from fancy restaurants.

The skewers were delicious so we wanted to try one of the wraps ($9.99-$14.99) to honor the restaurant’s full name. Of the beef, chicken, shrimp, and four veggie wraps, we chose the eggplant veggie wrap ($10.99). The tightly wrapped packet was cut in half and revealed the layered filling of grilled eggplant, greens, cherry tomatoes, red onions, feta cheese and homemade organic tahini sauce. Avocado can be added to any of the wraps for an additional $1.25. It was a convenient on-the-go item with balanced and satisfying flavors.

Desserts are either ice cream ($4.99), including intriguing flavors available in a cup or sandwich, and Boklavah ($2.99). We combined two flavors, saffron and pistachio ice cream with faloodeh, sweet glazed noodles made with rose water. We asked for syrup to be poured over the noodles and Kimiyaie agreed with grenadine.

The syrup on the Boklavah filo pastry hadn’t penetrated the top sheets of the filo, leaving them crispy rather than sticky.

Soft drinks and waters are available, but look for rosewater lemonade soon with muddled rose petals and grenadine.

Wrap N Kabob opened at the start of the pandemic. Kimiyaie said they did better than expected in their first year as they were well prepared for takeout or delivery food. Ninety percent of their current income is still based on takeout. Eco-friendly packaging would add another reason to patronize this Persian addition to Fourth Street in San Rafael.

Ann Walker is a freelance food writer. Send him suggestions, comments and questions at [email protected]

Selection of alcohol: None