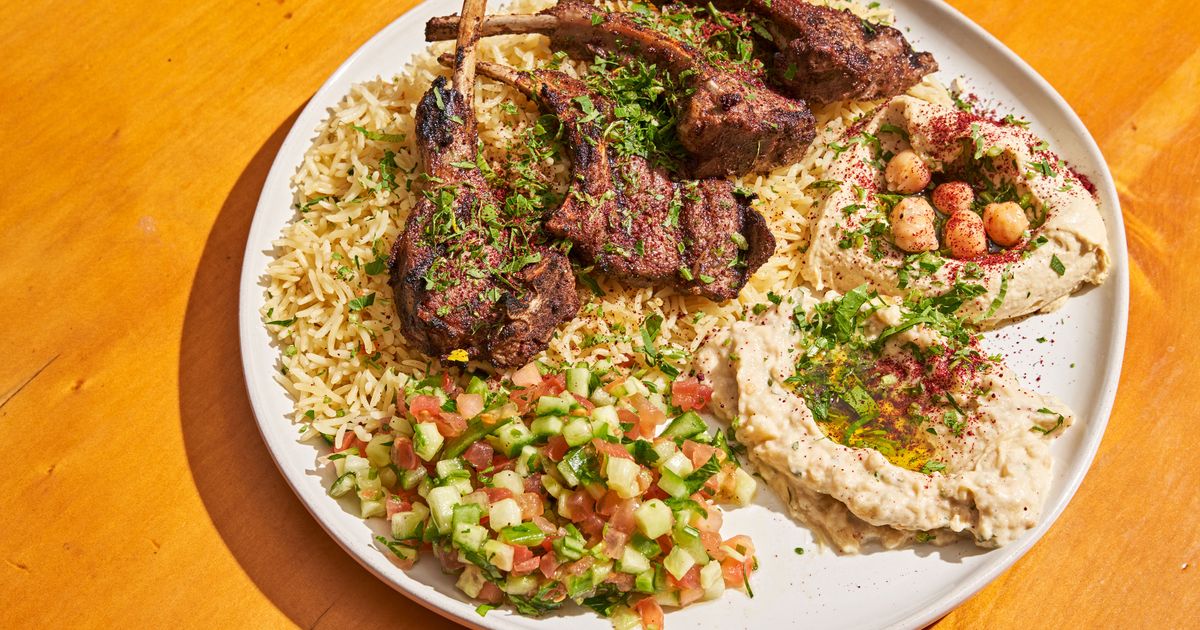 Whether it’s the potted club music, the ever-changing and updated Negronis at the crowded bar, or the familiar raw, rustic bucatini concoctions on the menu, there’s usually some similarity to new restaurants. from the big city. Every once in a while, however, a place comes along like the Palestinian Al Badawi, which has been open for a few months on Atlantic Avenue, which feels like stepping into another world. The facade is adorned with garlands of shiny plastic flowers and the spacious room inside smells of cinnamon, sumac and freshly baked bread. Tables are carved from twisted tree logs and topped with clay cups. There is a wall of living ferns on one side of the room and a fresco on the other, depicting the Dome of the Rock entwined in the oldest olive tree in the world, which is in Palestine, the waiters will say, and which has gave his name to the restaurant. .

Al Badawi is the latest venture of industrious couple Abdul Elenani and Ayat Masoud. She’s a lawyer who grew up in Brooklyn (her parents emigrated from Jerusalem) and an enthusiastic entrepreneur who over the years has run an eclectic portfolio of food establishments (several cafes and a chip bar Belgian), as well as a farm, where a lot of the halal meat for their restaurants comes from a contracting company. A few years ago, they opened the famous Bay Ridge Ayat restaurant, named after Masoud, an accomplished cook who wanted to introduce the kind of traditional pilafs and chicken and lamb stews of West Bank and Jordanian cuisines. that you don’t normally come across among the usual shawarma, kebab and meze dishes in Middle Eastern restaurants in New York.

Many of those mouth-watering recipes are also on display at the ambitious 100-seat eatery, like okra and bamia beef stew, rolled piles of stuffed malfouf cabbage leaves and platters of sumac-dusted musakhan chicken served on spreadable taboon bread. sugar. , gently dissolved onions.

There’s a domed oven at the front of the house, which produces wafer-thin slices of sajj bread that you can enjoy with a dizzying variety of toppings like crushed pistachios; beef and chicken shreds; or even that local Brooklyn delicacy, mozzarella cheese. Stacks of bread also arrive during dinner, and if you’re a puffy critic who likes to order a bit of everything on the menu, it might take a while to get your bearings because the multitude of mezes (I counted 20 ) and generous helpings of beef shanks, lamb chops and protein ouzi slam onto the table.

Our first round of dishes at Al Badawi started with the aforementioned meat and rice-stuffed malfouf cabbage leaves, along with servings of wara dawali, warm, hand-rolled vine leaves stuffed with loose tomato deposits, onions and freshly cooked rice. The wonderful mezze platter included a rich, freshly blended hummus, plus another Levantine specialty called muhammarah, made with ground red peppers, walnuts and a dash of pomegranate syrup, all presented in a red dish of the size of a small wagon wheel.

Mansaf is served with a sense of ceremony.

As with the whole menu, the grilled lamb chops that followed had a just-cooked home quality, as did the crispy-skinned musakhan, which fell apart when we ate it with the pieces of toasted taboon bread in below. Like a good barbecue, this onion, sweet and salty, sumac-infused chicken has a way of lingering in the deep recesses of the brain for a day or two after enjoying it, and the same goes for other delicacies like the grand fattat jaj (folded chicken strips with slivered almonds and mint yoghurt in small mountains of rice) and the rich lamb mansaf, which arrived at our table with the kind of ritual ceremony (bread, sauce, a giant family platter) who attends a real roast beef dinner in the West. Bone-in chunks of lamb are simmered to a fatty tenderness with shavings of dried, fermented yogurt, then placed on layers of sajj bread and piles of yellow rice, all flavored with cinnamon. As with the chicken, the lamb separates easily and mingles with the bread and rice, which we softened by eating with rich dollops of lamb jus and yogurt served in a bowl alongside.

Will you have room after your giant serving of mansaf – there are two equally daunting family-style options for parties up to six and eight – for a taste of chicken or beef shawarma sandwiches (grilled as a panini on the griddle) or one of the many types of Manakish flatbreads that are served at this loud establishment, like the best pizza in Brooklyn, on raised metal trays? If you do, my group of tasters and I recommend the mixed chicken and beef sandwich and the ‘seven cheese’ option, although we agreed to save the hearty seafood offerings for a later visit (yes, a whole red snapper is available with a side of rice and lemon potatoes), as well as the kebabs (seven varieties, including the filet mignon) and the new round of desserts, which to our great relief were being “reworked”, according to our server, but will be back on the menu soon.

Open: 11 a.m. to 11 p.m. every day
Prices: Appetizers $3 to $27, mains $10 to $270 for family lamb ouzi.
Recommended dishes: Mezze filistini, chicken musakhan or lamb chops, fattat jaj chicken pilaf and lamb and yoghurt mansaf.
To note: If you’re dining for one or two, the bar in front of the oven is one of the best seats in the house. Al Badawi is a BYOB establishment.

By submitting your email, you agree to our Terms of Use and Privacy Notice and consent to receive email correspondence from us.