A world-renowned chef moves into a Harvard Square hotel 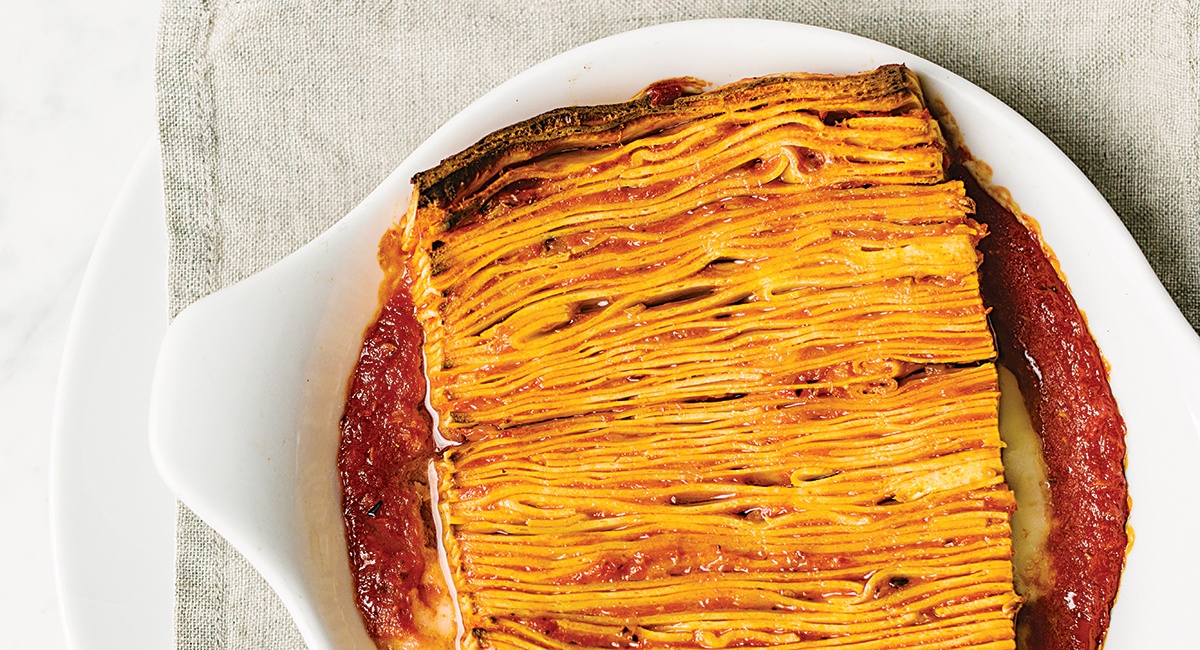 A world-renowned chef moves into a Harvard Square hotel

Listen, I don’t know who runs the Charles Hotel, and frankly it’s none of my damn business. I’m just a simple food guy. On questions of intra-hospital backstage intrigue, I remain as neutral as Switzerland, you know, used for. What I can tell you is that last April, after a five-year run, Benedetto, the acclaimed Michael Pagliarini restaurant (we also liked: three stars in 2017), was released. A few months later, Bar Enza, a “neo-trattoria” by Lyons Group – the folks behind Scampo, Rochambeau, Sonsie and several popular Fenway haunts – was there, offering a menu of refreshed Italian dishes.

Before continuing, it’s probably worth stopping to decompress ‘crowd-pleasing’, a loaded term, for sure. There is no quick and easy way to determine, for example, whether the late Benedetto strascinati with Ossabaw Pork Sausage and treviso was more or less likely to please the proverbial crowd than, say, the towering “meatball” of the new spot gigantic($29), made with beef, pork, veal and BBQ brisket purchased from the Smoke Shop, on a plate of mashed potatoes. It’s subjective. You know it when you see it. The Bar Enza hit parade menu? I see him.

So where were we? Law. So Hotel Charles replaces Benedetto with a crowd-pleasing Italian spot. Fair enough. They have a business to run. But here’s the twist: The guy they have to make the calamari, Caesar, and prime rib is none other than legendary chef Mark Ladner, the Belmont native who cut his teeth at Olives in his wow years. , moved to New York and spent the next 25 years becoming one of the biggest names in the emerging modern Italian scene – first as assistant to Mario Batali at Babbo and Lupa, then as chef cook from Del Posto, where the New York Times found its cuisine so refined, inventive and contemporary that it awarded an Italian restaurant four stars (gasp!) for the first time in three decades.

The good news about Ladner’s new stomping ground: Turns out hotel-friendly Italian food can top its pay grade when a rock star chef runs the show. In fact, once I got over the shock of seeing a culinary hero applying his cooking chops to, well, cooking chopsit got a little more interesting, or at least more satisfying, to watch Ladner create edible poetry within the confines of the constraints.

Your best move is to start with a aperitif or a cocktail, plus some antipasti to start the evening off right. The curated drink list is short and sweet, one of the perks of which was that my “Il Affumicato” ($15) – an invigorating potion fueled by smoked mezcal, sweetened with almond orgeat and topped off with ginger fresh and saffron-purple florality of Meletti amaro— arrived as precisely calibrated on a sleepy Monday as the moment the bar manager mixed it himself. Mile-high ciabatta sticks ($6 for two), sourced from Hi-Rise in Cambridge, were accompanied by a plate of fine mascarpone topped with intensely floral Sorrento lemon oil, pepper olive and black lava salt. Also strong was the shrimp cocktail ($30): six plump U-12 beauties delicately poached in a rich aroma made from shells and tails, then chilled and plated with a stack of Russian doll iceberg leaves; a horseradish cocktail sauce reduced in intensity the right number of notches in the direction of the marinara to be enjoyed with a fork (or a cup of lettuce) once your quota of shellfish has been exhausted; and, curiously, a portion of piping hot fries in a paper cone. That’s right. You get some bonuses fries. It’s… quirky. And I liked it enough to put it in that little “Highlights Menu” box you’ll see on this page.

At Del Posto, Ladner’s pasta was not only considered good but, in the words of one enthusiast Times review, “incredibly good”. They’re also strong at Bar Enza, although they’re a bit simpler conceptually. The best I tried was the angry lobster ravioli (market price), which featured a tomato-based sauce enriched with Calabrian chili paste and generous chunks of sweet and tender decapod shellfish. The prawn scampi ($29) on linguine didn’t reinvent the wheels, but it was the best version I’ve had in town. I like when the sauce isn’t so wet that it falls off the noodles, which is the problem I usually have. Garlic breadcrumbs, a touch of Aleppo pepper: classic but flawless. Meat and cheese
ravioli ($28) – no, I swear I’m not exaggerating everyone’s aggressive description; it is literally the name of the dish as it is written – was filled, as stated, with beef stracotto (braised roast) and robioline (cream cheese, essentially), then brown butter sauce. If you are here with a crowd, this one will please her. 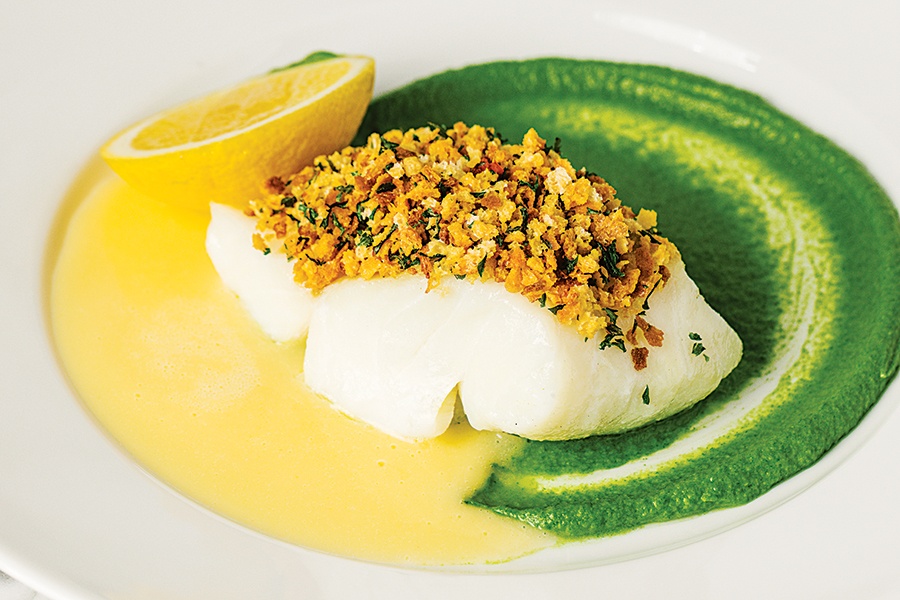 Hake with a twist. / Photo by Linda Campos

I bet another dish is flying off the menu: the “Shake & Bake Hake” ($28). It looks beautiful on the plate, with a bright green swirl of rich broccoli mash that fills half the surface, topped off with a generous pile of dark brown buttery crumbs. At the table, the waiter fills the other half of the plate with a pale yellow lemon butter sauce that looks and flows like semi-gloss eggnog. You slide the wet, shingle-covered strips of butter-poached fish through the green sauce, then the pale yellow sauce, and back again. It’s so elegantly presented that it takes a beat of time to realize it’s a good old-fashioned New England baked scrod dressed up for a night on the town.

At the other end of the spectrum are dishes such as lamb medallions ($44), which were delicious but had all the visual appeal of sensible footwear. Five brownish-gray oblong rectangles of good Colorado saddle, seared to medium-rare, then painted with a translucent, grainy golden-amber mustard sauce that looks like…let’s go with “toffee chips.” Choosing the boneless medallion here is something of a puzzle. Maybe someone thinks the lamb patrons at the Charles Hotel don’t want to settle for bones? Or. And that’s just conjecture. Maybe Ladner thinks, as I do, that no restaurant has ever done better lamb chops than the lamb Scottadito at his old gig, Babbo, and chose the path of a little distance from the past. 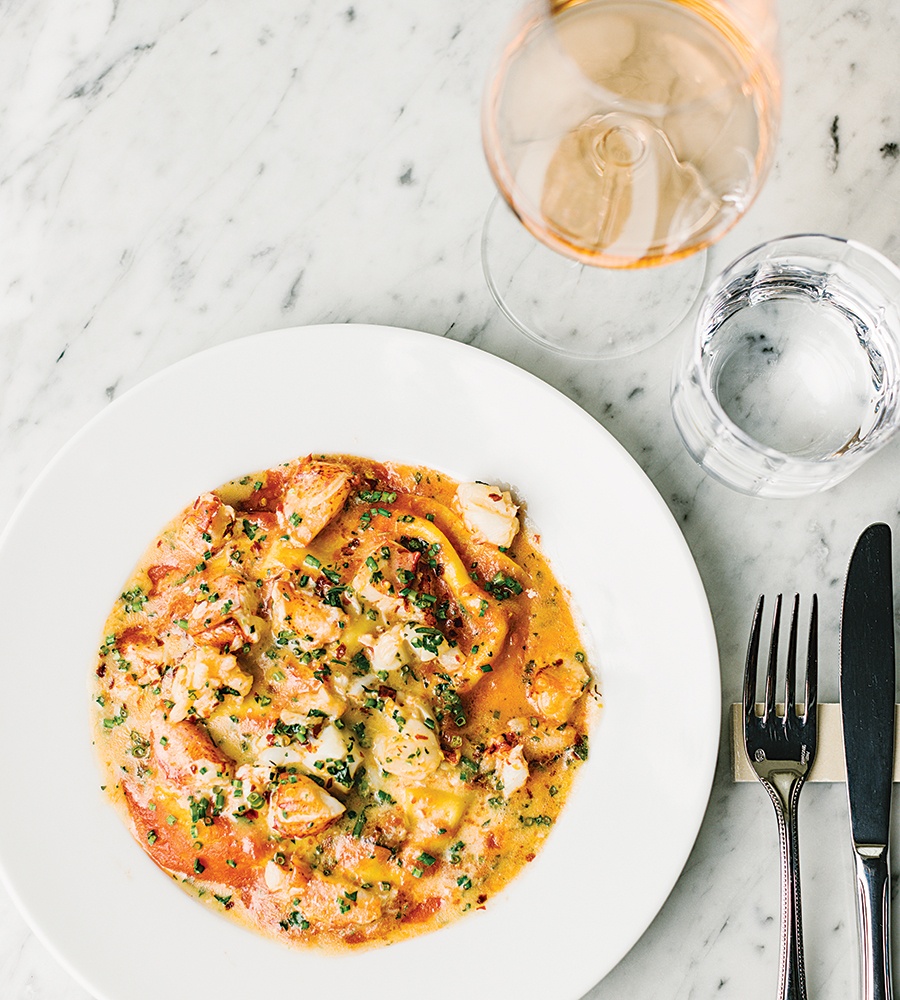 Sometimes, of course, letting go of your past life isn’t in the cards. The one item on the menu that I actively disliked (other than the barbecue-meatballs) was an oddly Mannerist take on Ladner’s most famous dish: the 100-layer lasagna he created for Del’s menu. Posto in 2009. Unlike the worthy original, this one ($35) skips the meat sauce in favor of alternating layers of tomato marmelade and mozzarella beciamelle, a veggie flex that to me tasted like some sort of savory layered cheesecake without (wait for it…) an optional meat sauce ladle that you can get for an extra five bucks. It looked like a stuffy Vegas act from another era.

I wonder if all this bothers him. But I also wonder if he didn’t have much to say on the matter. Attaching your trolley to a Groupe Lyonnais restaurant has many advantages. We have a nice space to cook, a good promotion, a real budget for ingredients, but one thing is certain: you have to play your hits.

Which brings me to the guy with a laptop and voice issues out in the open who holds court a few bar seats from me at Bar Enza. He really likes lasagna and can’t wait to spread the good news to the kitchen. But he’s not convinced the bartender fully grasps the superlativity of the situation. “No, no, listen…I’m serious. Come in and tell your boss there’s a guy here who ate lasagna around the worldand this the lasagna,” he says, pausing to wave a fork and let the stakes sink in, “is the best lasagna I’ve ever had.