A 42-year-old restaurant manager has been ‘playing dead’ on TikTok for the past year in hopes of landing a gig in Hollywood – and it paid off with a role in ‘CSI: Las Vegas’ 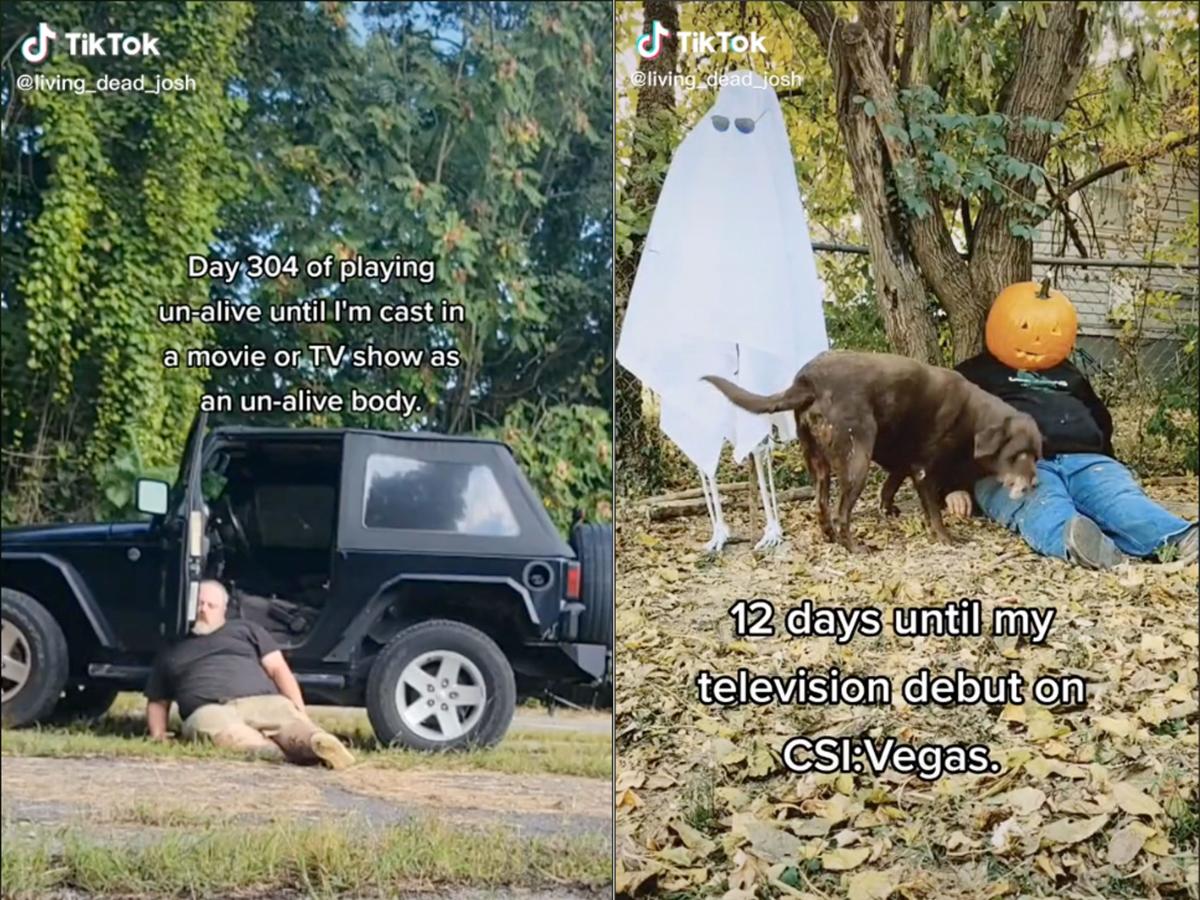 A 42-year-old restaurant manager has been ‘playing dead’ on TikTok for the past year in hopes of landing a gig in Hollywood – and it paid off with a role in ‘CSI: Las Vegas’

Josh Nalley, a 42-year-old restaurant manager in Kentucky, has been playing dead on TikTok for a year in a relentless — albeit relatively low-key — push for a television role.

At the end of July, his dream of playing dead came true: CBS offered him a corpse role in “CSI: Las Vegas”.

Nalley’s TikToks, which have accumulated up to 5.8 million views, are like a macabre version of Norwegian “slow TV”. The camera rotates (held by a friend or, more often, leaned against something nearby), and for about 10 seconds, Nalley is sprawled on the floor of Ripley’s”Believe it or not” Hollywood Museum or an abandoned road, or lies face down in the snow or one flow as his foxhounds – perfectly, cinematically melancholy by nature – curiously sniff him.

More than 300 days since he began publishing, CBS reached out to Nalley to say they had seen his videos on their For You page and offered him a role in “CSI: Las Vegas.” So, Nalley took a vacation from his day job and the CSI social media team took him to sunny California for four days.

On set, Nalley spent a few hours in a makeup chair so they could “make me look more dead than I naturally look,” he told Insider.

For his big screen debut, Nalley was instructed to lie still on a stretcher. He admits that “standing still in one place for five hours” was the hardest part, but Nalley had trained extensively for the role. Over time, he honed his craft, learning to hold his breath longer.

Nalley, who doesn’t believe himself to be an actor, told Insider that playing dead online seems like “the easiest way to get into a movie without having to do a lot of work.” Most of Nalley’s artistic challenges during the filming of more than 350 videos have been finding new places to pretend to be dead without alarming others – he “never wants to be the cause of anyone’s worry”. one,” he explained — or stop his dogs from licking up the fake blood.

Nalley’s TikTok account @undead_josh became a scrappy group project for its 115,000 subscribers. Nalley finds new places to stay as still as possible, and commentators tag directors and film studios, sometimes daily, in hopes of landing him a role in Hollywood. He says the support from all kinds of people has been “incredible”.

Now that he’s achieved his pie-in-the-sky goal, Nalley doesn’t know what the future of his TikTok will be. He hasn’t planned that far yet. For now, he can’t wait to see his first screen role, which airs Nov. 3 at 10 p.m. on CBS.

Read more: The TikToker who went viral for skateboarding while drinking cranberry juice and lip-synching with Fleetwood Mac turned his fame into an acting gig on a popular Hulu show

Advice by e-mail on everything related to the Internet at [email protected].

Read the original article at Initiated